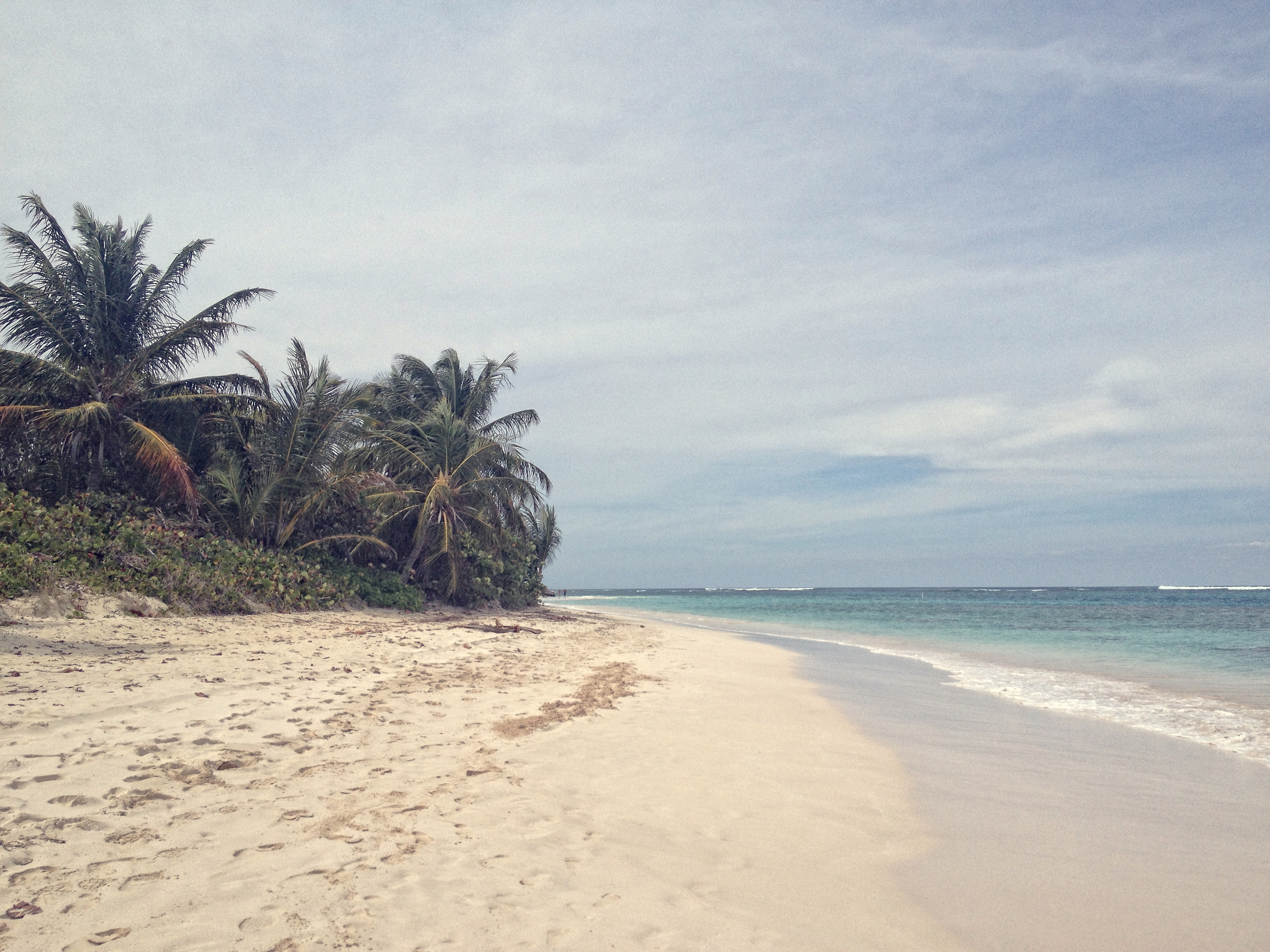 White sands and clear waters are components of everyone’s dream vacation. Such fantasies can be made real with a quick trip to the islands off Puerto Rico and they are definitely worth the visit.

Doesn’t matter how you get there, just figure out a way and you will be forever grateful. We chose Culebra for our quick trip.

Culebra is an island just off the coast of Puerto Rico. We went with a tour group where food and drinks were included on the boat ride, however, later, we met some other locals that told us that they could have taken us themselves and for much cheaper. Had we known this prior to arriving in Puerto Rico we would have definitely taken it, but alas, reservations had been made and we were eager to make the trip. We had fun nonetheless.

The drive to the docking point was rather uneventful as it was early in the morning and everyone kept to themselves. We had been out dancing and drinking the night before so 7 am was not our shining moment, but we weren’t about to miss an adventure. The driver did try to keep the ride lively, though by giving us a tour as we drove down the road in our half-asleep states.

Upon arrival to the edge of Puerto Rico, we were greeted by a man with “Welcome, what size are you?” Taken aback by this question from a fit, Puerto Rican man I had said nothing. Why was a strange man asking me what size I am? Buy me dinner and some wine first, at least. Then maybe, maybe, I’ll tell you. As I approached him I was able to see that inside a large container beside him were several flippers for scuba diving– and there went my fantasies of being with a Puerto Rican man. Disappointed, I joined the group as we gathered our flippers and set straight out on the boat. 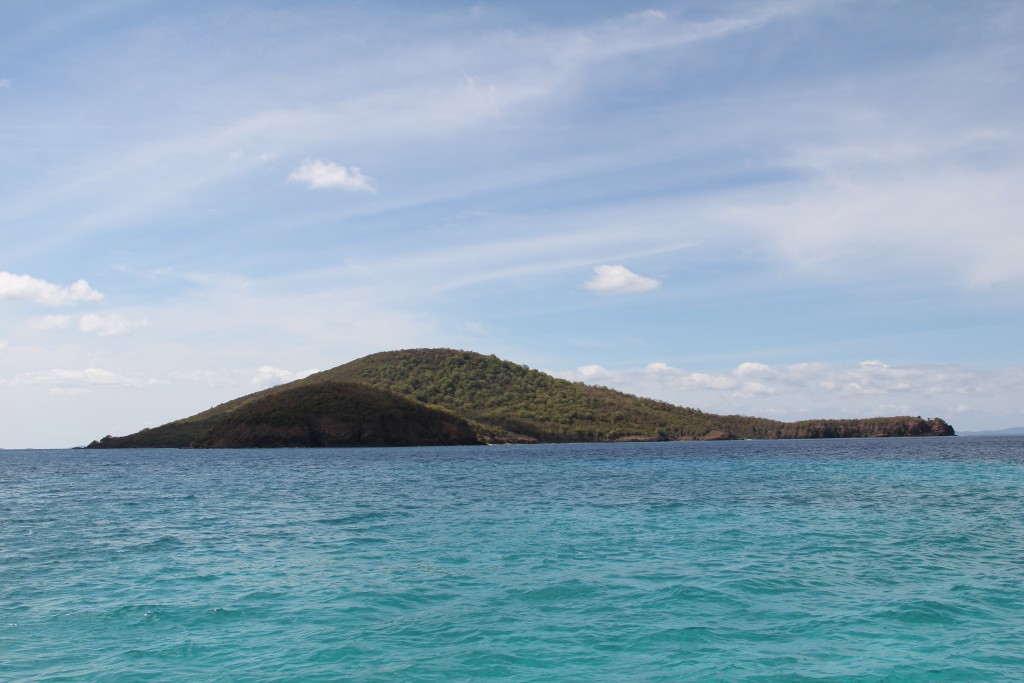 We passed another island

There were younger kids on the boat, which was a bit shocking for us since it was an all-you-can-drink and we were not warned of the hazards of children. But that certainly didn’t stop us from engaging in alcohol consumption. How much rum can we take in before we reach the other side? Take notes kids, you’re going to need to refer back to them one day. 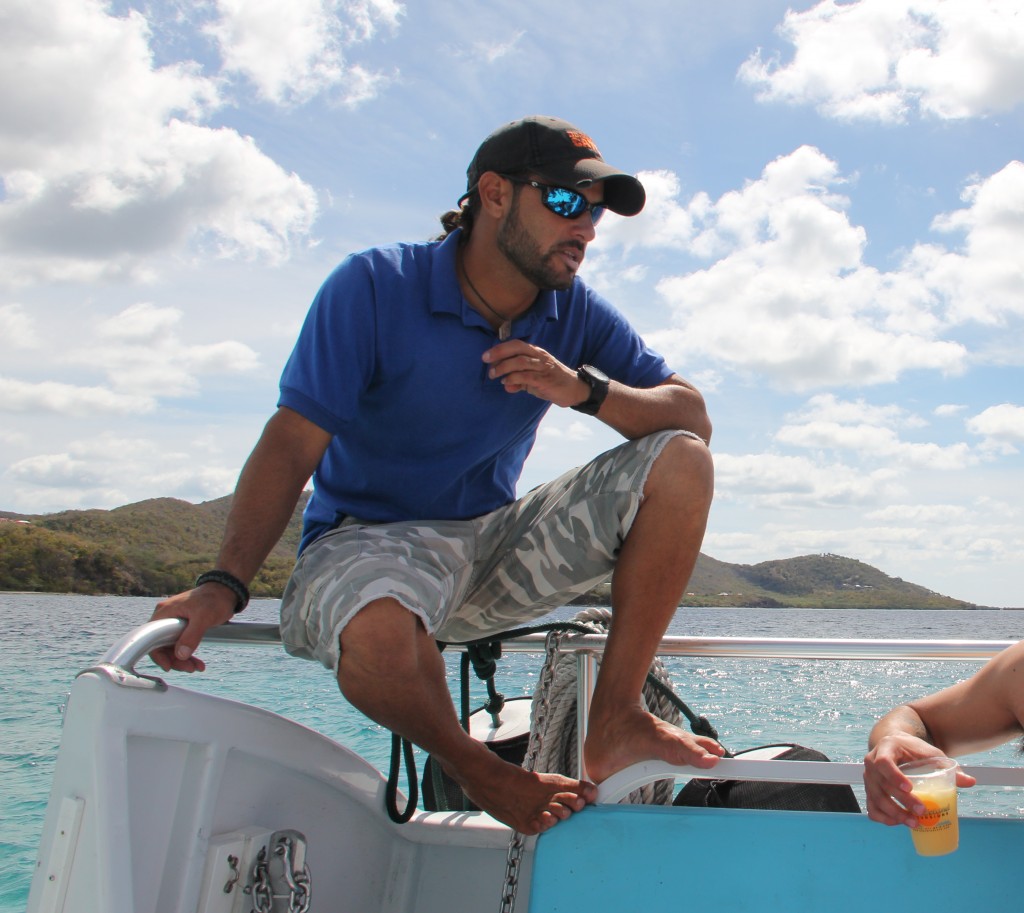 Before hitting the beach, our tour guides took us to a bay of Culebra where we all jumped into the water to try out some scuba diving. Goggles and flippers equipped, we swam through the the clear waters that’s posted on everyone’s computer screen saver. It was warm with just enough breeze to keep us cool, and the water was just as warm. It was my first time scuba diving so I was in complete awe of the whole thing. I saw a sea turtle, lots of fish and of course the reef. It was great while it lasted, but we were anxious to get to land: Flamenco Beach. 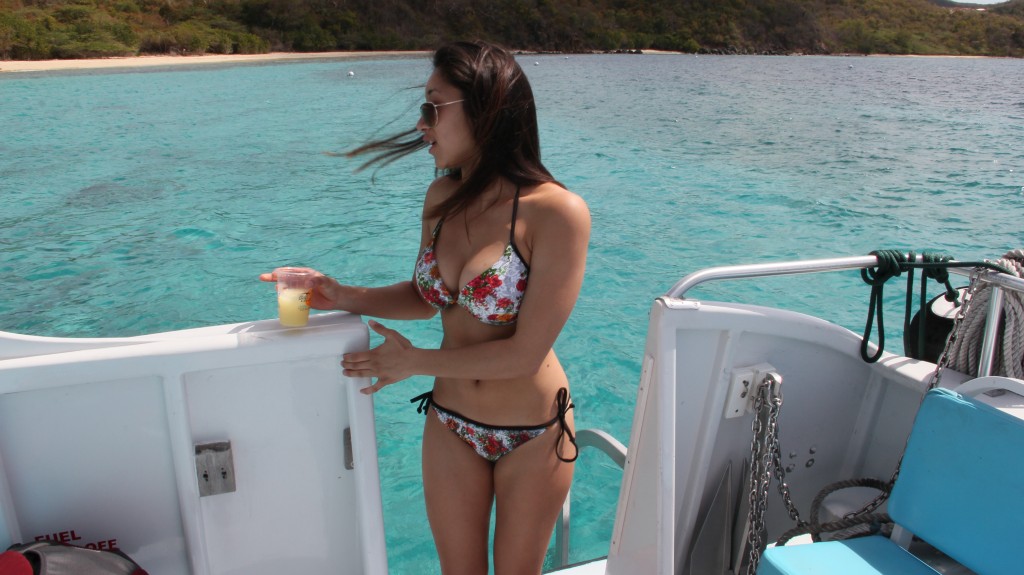 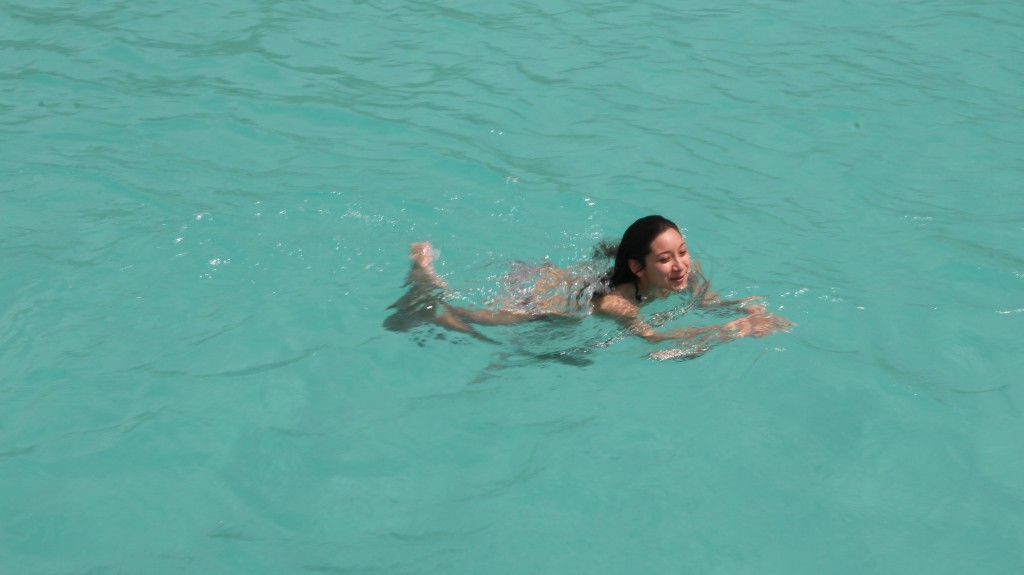 By the time we got to Flamenco Beach our pina coladas were starting to sink in. Our boat sat just off shore so that we could what, take a raft to shore? Nope, swim.

Trying to not think of stories of people drowning while drinking and swimming, our tipsy little butts glided into the water, and swam until our toes could touch the sand (which takes some time for my short-ass) It was everything anyone would ever expect from Puerto Rico: palm tree leaves bending in the breeze, small pathways that led through the brush, soft sand and electric blue waters. We even trekked through the forestry a bit where we found an abandoned tank covered in graffiti. 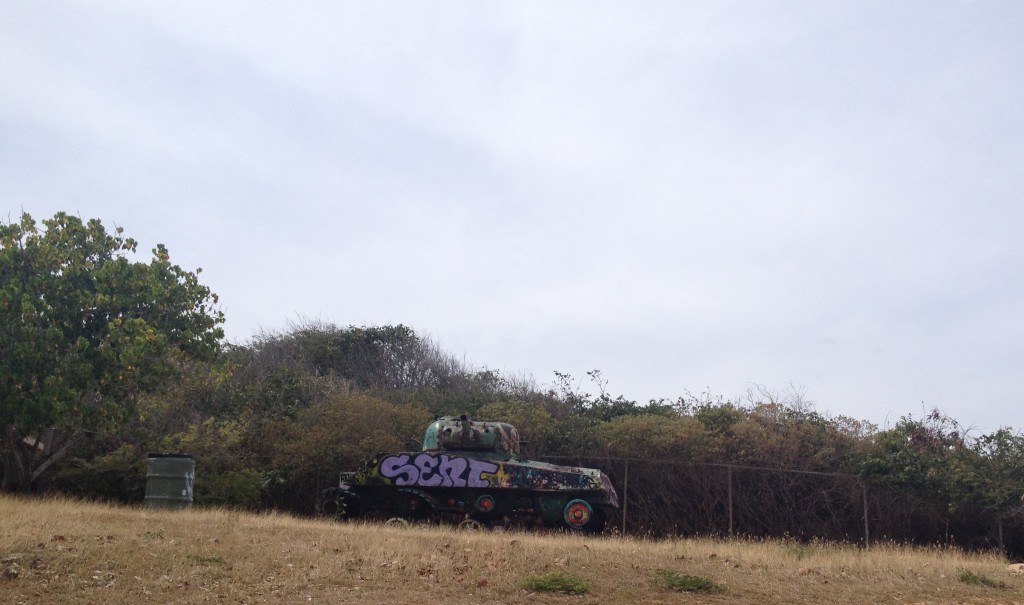 It was a paradise that I didn’t want to leave, but the thing with tours is that they’re the ones that take you back home, so after about 2 hours of chillin’ at the beach, we swam back to our boat and enjoyed the bumpy ride back. 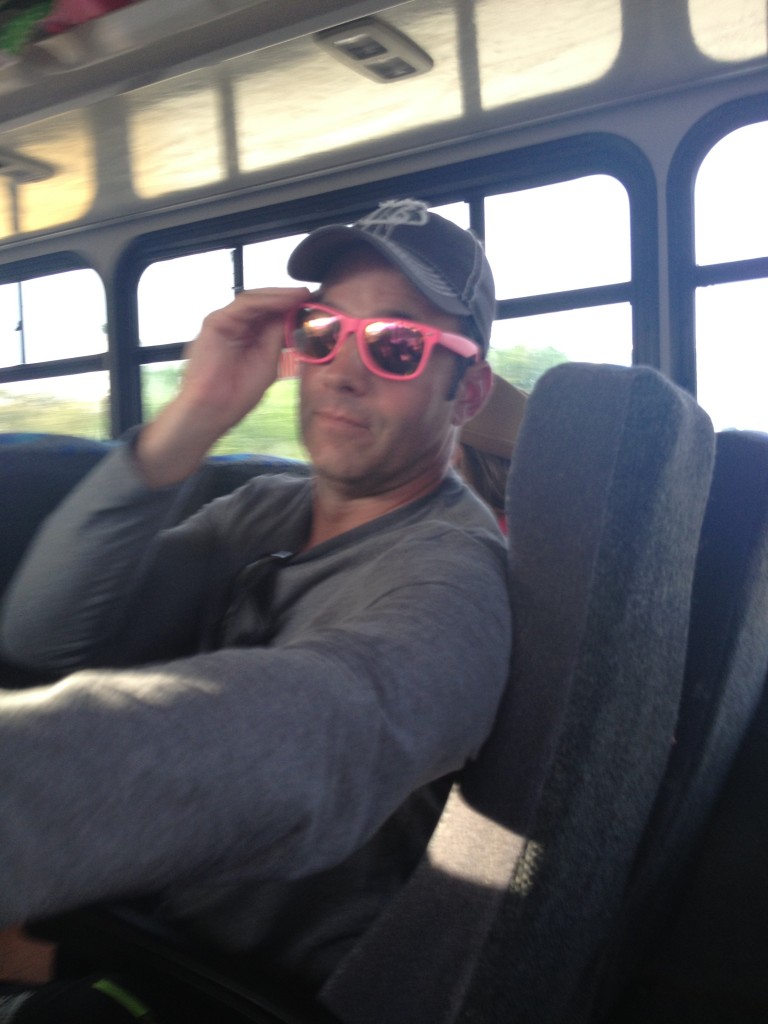 Drunk shenanigans on the way back home

The best was getting back into our shuttle and realizing that the others (from different tour groups) had also enjoyed the included drinks and suddenly, everyone was friends! It was a complete turnaround from the trip that we endured coming to the edge of Puerto Rico. Tipsy and ready for the nighttime activity, we joined our new friends at their fancy hotel and swam in their fancy pool.