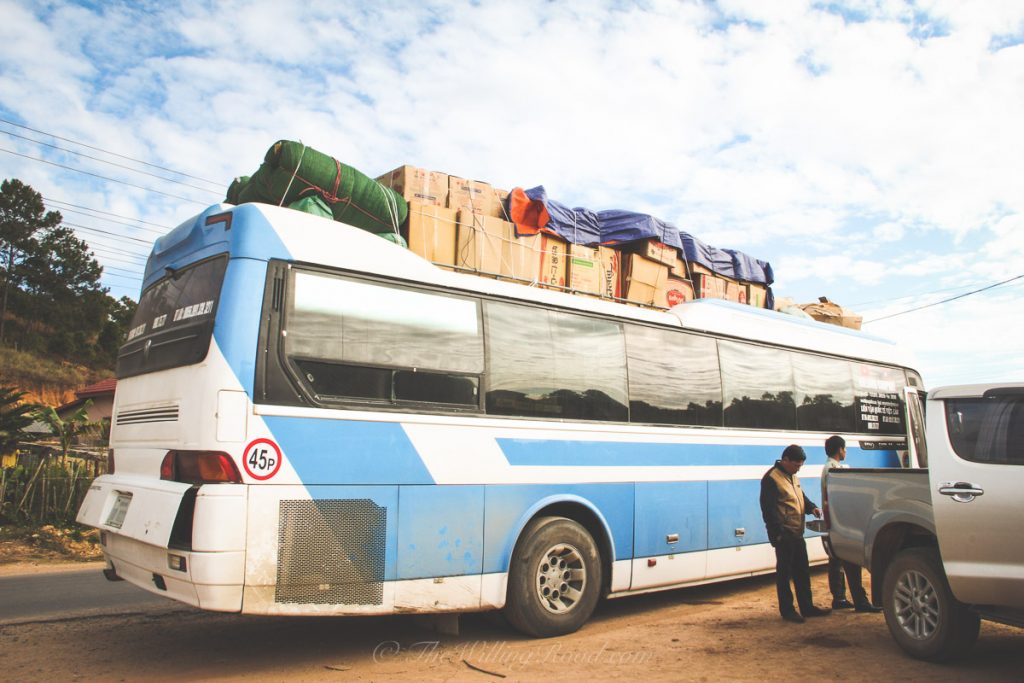 The 30 Hour Bus Ride From Hanoi to Luang Prabang

I had heard complaints about the bus ride from Hanoi to Luang Prabang and as with all bad reviews and difficult trips, I was intrigued. Could it really be that bad? I read up on reviews, some supporting the idea, others warning travelers to steer clear of the trip. I decided I needed to take the trip myself to see just how bad it was. This is my experience:

With an open mind and sense of adventure I booked the trip with a couple of travel friends going the same direction, one of whom was prepared to drop the money for a plane ticket, but decided that planes are the easy way out and joined us instead.

Five PM. A man has us follow him on his motorbike to the minivan pickup location. After cracking a few jokes he says “Wait here,” and leaves. This guy just ditched us. I stand awkwardly in the random parking lot that he left us in with my friends and other backpackers headed to Laos. How do we know which bus it is? Ten minutes go by, twenty minutes go by. He forgot about us.

Finally, a minivan pulls up in front of us and a man hops out. “Laos!” he yells. Unsure if this guy even works for the same company all five of us confused backpackers throw our bags into the van and stuff ourselves in amongst other foreigners.

The minivan took us outside of the city where the larger buses waited for us. Before letting us board though, packages were being loaded into and on top of the bus. Ok, transporting a couple of packages makes sense. Upon boarding I could see where all the packages went: the entire back was piled high with boxes and other wrapped items, like the Christmas mornings that you wished you could have every year but you’re an adult now and your Christmas tree is an air freshener hanging from your car mirror.

It’s a sleeper bus so all the seats are beds made for… well, sleeping. On one side the seats were in two and the other side had single seats so if you’re lucky, you could get a single seat and you won’t have to share with a stranger.

The aisles were cushioned which got my hopes up. “You guys! When we get bored we can sit in the aisle and play cards!” I had exclaimed excitedly. My friends smiled at me like “This poor girl who gets excited over nothing, do you even realize what you’ve gotten us into?” They weren’t quite as enthusiastic as me.

Of course, it wasn’t the most comfortable sleep I had but that’s to be expected when you’re traveling. The bus stopped many times throughout the night but I was in and out of sleep so I hadn’t paid much attention to why. Turns out that we were constantly being pulled over by the police due to the packages stacked on top of the bus. One time, the bus stopped to pick up some more packages and I had to pee really bad. From the upper bunk, I put my feet toward the floor and almost stepped on someone’s face. Wait, what? I looked down to find the floor covered– with people. The aisles were not conveniently cushioned for the comfort of card playing but so that they could fit more travelers. Local people lay on the floor, their limbs fitting around each other like pieces to a puzzle, their necks twisted to make room for people like myself to place their feet. My sleeper bed with AC above me and my friend beside me didn’t seem so bad anymore.

At around 3 in the morning we made it to the Vietnam/Laos border where the bus driver turned off the engine and left us all to sleep until the border opened at 7 am. We went through visa processing, paid our dues and walked across the border while the bus itself was searched by border police and then met us on the other side. Once everyone was ready the bus took off again through the windy roads of Laos.

The bus drove through local villages of Laos as well as over mountain passes overlooking unforgettable scenery. I was instantly in love with Laos. The landscapes stretched far and were gorgeous in every direction that I looked. I wouldn’t see this if I were flying in a plane, was all I could think. The untouched villages that we passed were so real, void of tourists, void of anything western– a traveler’s dream.

I had drifted off again, the bus rocking me to sleep, but was woken by the sound of our bus turning on and off, on and off. Curious as to why, I opened my curtain. Our bus was straddling a rather large crack in the road which ended at the edge of a cliff and led down to a village. There was a line of cars and motorbikes behind us, dogs were excitedly circling us, and local Laotians were watching us for entertainment. The bus continued to start, rev, and stall again. The Vietnamese men on our bus gathered around the front and I joined them to see what the commotion was about. We were stuck in loose dirt patch on a small slanted hill– again, over a large crack in the ground on the edge of a cliff. Cool. The men who worked for the company had gotten off the bus and were trying to guide the driver with little luck. Finally something was yelled in Vietnamese and the men all got off the bus with me following closely behind. The wheels had dug themselves even deeper. Now local Laotians and men from our bus were gathering wood and blocks, anything to create traction. Others were taking a piss on the side of the road. Some motorbikes were quickly making their way past our bus. A woman and child cautiously jumped over the crack before the bus could try moving again. The village was watching us. With a majority of the passengers unloaded, the bus was able to make it out of the ditch but we weren’t allowed to get back on quite yet. Up ahead the road didn’t improve so before boarding again, the bus needed to make it past this obstacle. We walked ahead of the bus, the local people paying particular attention to our strange faces and waited at the bottom of the hill where the ground leveled out. 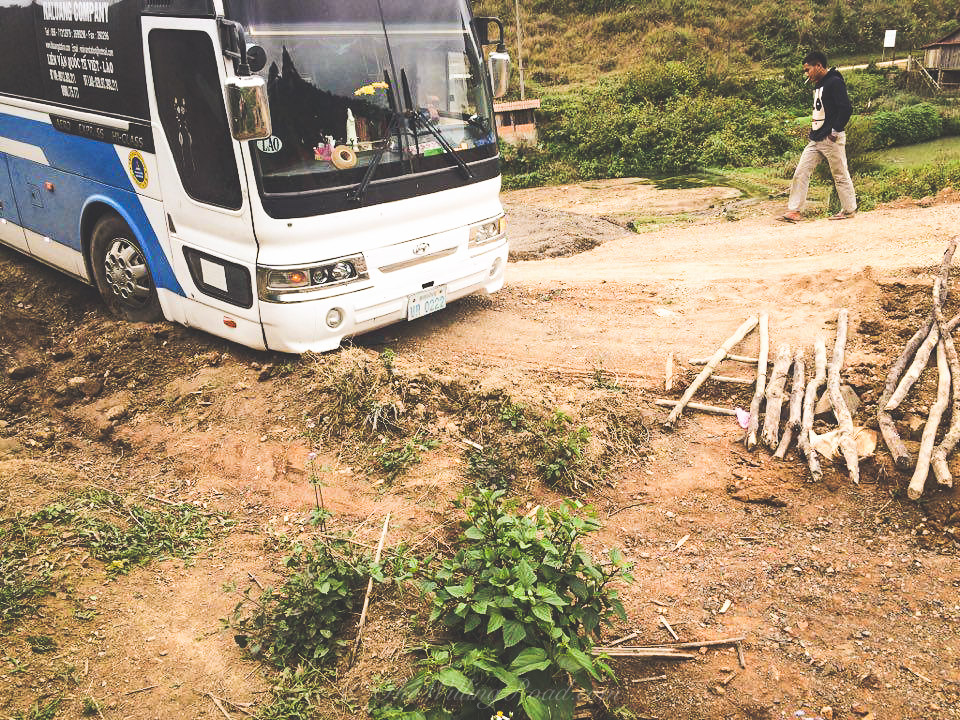 Creating traction for the bus

20 hours into the ride the bus stopped at a Vietnamese restaurant on the road where we stuffed our faces. Unfortunately, this is also where my friend contracted food poisoning from the bahn mi that she bought before the ride and ate a few hours later (don’t do this!). The drivers were kind and patient and the lady at the restaurant gave her medicine but when that didn’t work they took her to the clinic next door. This added on an extra hour. When she wasn’t getting better the drivers gave her some advice for the next bus and she stayed behind. We thought we had 6 more hours left and she didn’t think she could make it that long. 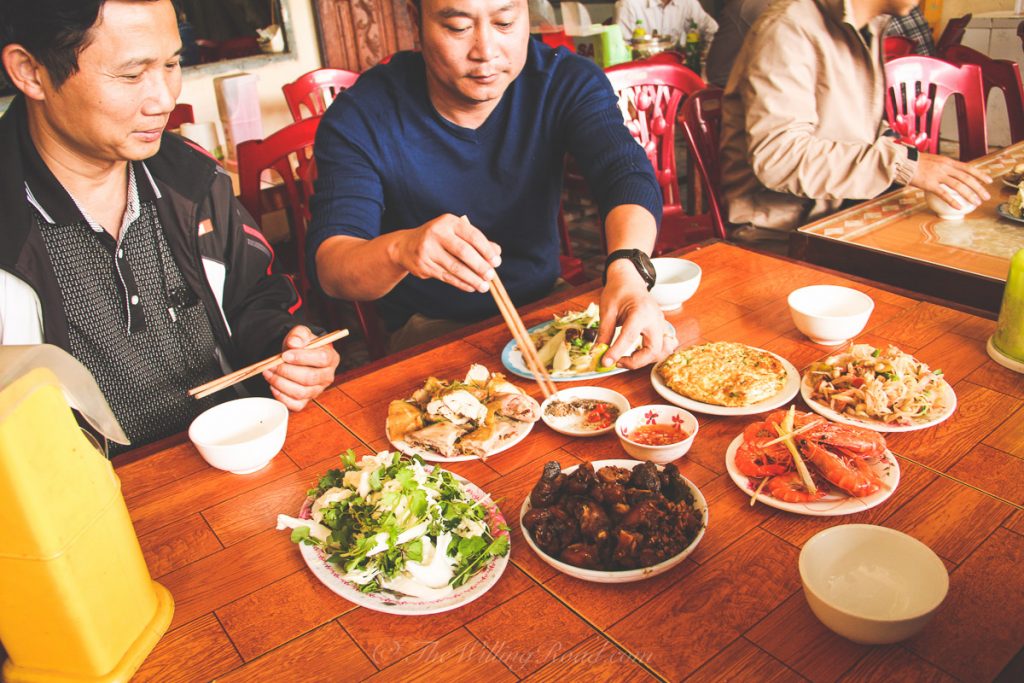 We ate with the Vietnamese who were also on the bus

We were stopped by the police one more time during our trip, but this time they weren’t taking bribes and the stop was another hour added onto our trip. The bus became quite stuffy as we waited so we all hung out outside; the drivers were irked by the police and gestured for me to take pictures of them. 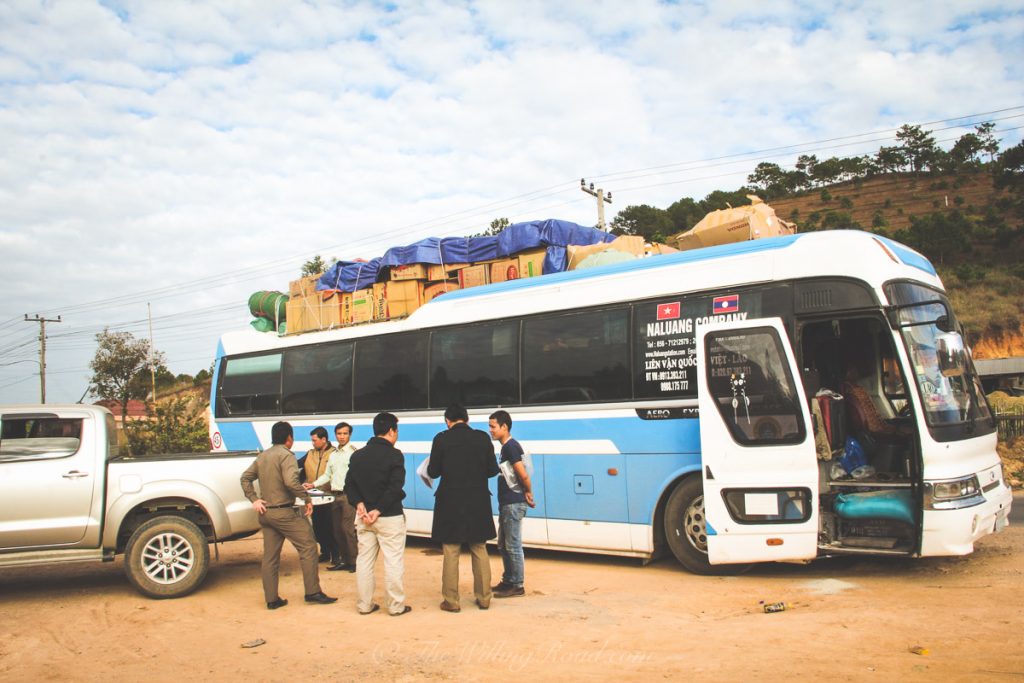 The bus drivers talking to the police

Finally, we made it to Luang Prabang, a journey we had started on December 4th at 5 pm and ended on December 5th at 11 pm. It wasn’t the most comfortable ride nor was it the quickest, but it made for an interesting peek into the culture surrounding us. If you have the time and are looking for the cheaper way, the ride isn’t as bad as many make it out to be. 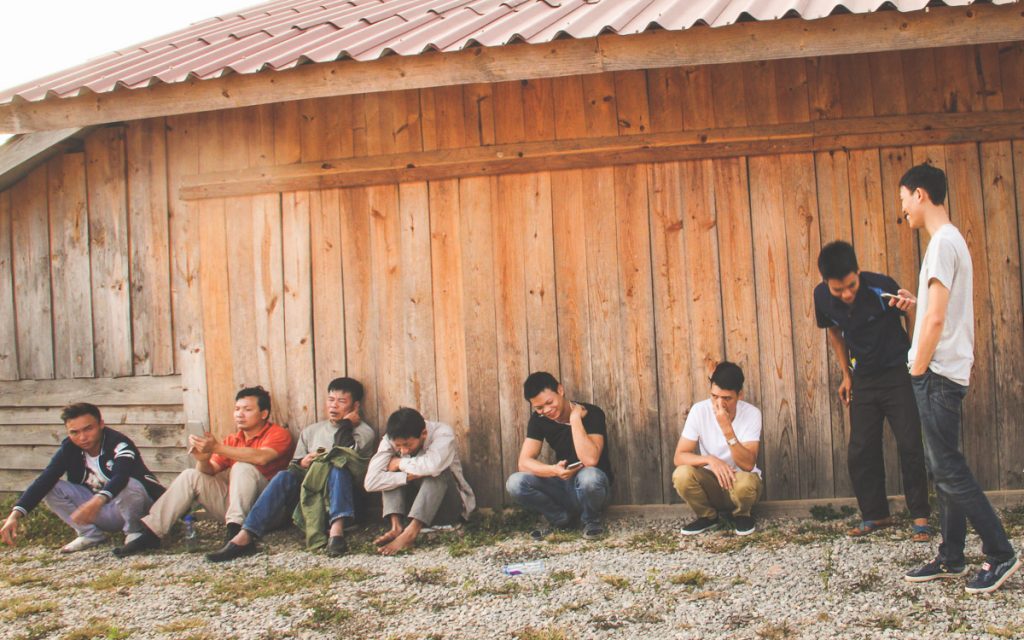 The other passengers taking the 30 hour bus ride. They were all very friendly.

Do you want to make the same trip? Here are a few things to note!

-The bus can be booked through any travel agent in Hanoi. We chose a random one in the backpacker’s area.

-They provide you with blankets, but no pillow. I used my sweatshirt.

-We were told that there would be wifi on the bus, but there wasn’t. I had a SIM card that lasted until the border though.

-There are no plugs for electrical devices so charge your stuff ahead of time or embrace the book.

-Bring snacks. The bus makes a couple of stops for food, but it’s nice to snack in between.

-Don’t eat questionable food before your ride or bring unpackaged food for later like a bahn mi. Bahn mi’s are meant to be eaten right away, not packed away for lunch later.

-Bring toilet paper. If you’re a female and you need to pee, get comfortable with squatting anywhere as the drivers do make multiple stops but they’re men, so it’s easier.

-Wear your pjs for maximum comfort

-Always smile, always say thank you and remember to keep an open mind! You’re traveling like the locals do!