Mount Etna is the tallest active volcano in Europe. It’s last major eruption occurred in July 2001 which lasted for several weeks and since then there have been other smaller yet significant eruptions.

I dreamed of climbing this volcano.

I was scheduled to do a tour up Mt. Etna as part of a conference, but this was the beginning of coronavirus and events were already being canceled left and right. Upon arrival to Catania, Sicily, I was approached by one of the hostel workers asking if I wished to accompany him and two other guys interested in climbing the mountain. Since I was already scheduled and promised a tour with my conference, I hesitated before finally agreeing. I wanted to climb the volcano and figured if I had to climb it twice, I’d be okay with it.

“What if tomorrow never happens?” I reasoned.

The next morning, I hopped into the car with 4 strangers: two dudes from Germany, the hostel worker from Argentina, and our local tour guide, Salvo, from Sicily. It was my first time being in a car with an Italian and I gotta say, it’s a ride in itself. There are no road rules.

At the bottom of the mountain, in Catania, it was temperate during the day, a bit chilly at night. I half expected to be able to twirl around in a dress, take pretty photos next to a fountain while eating gelato. The volcano was a whole other planet. 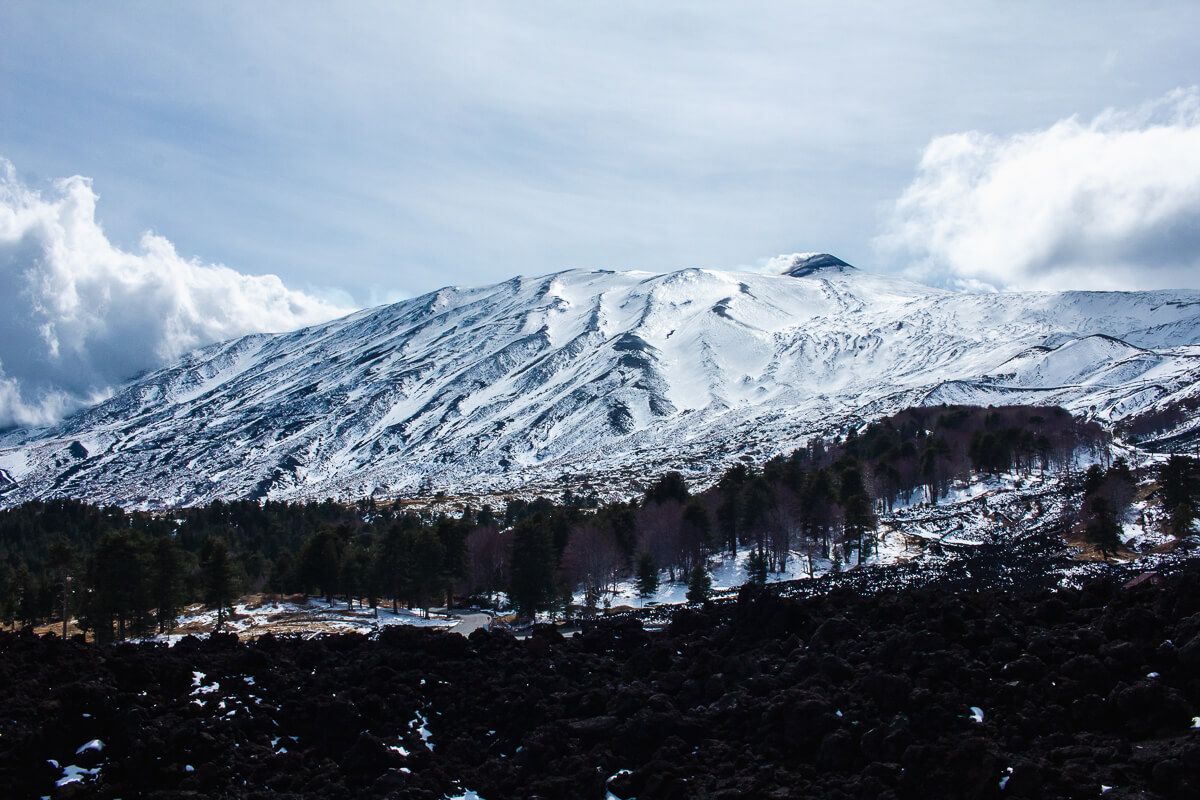 As we drove up the volcano, snow covered the ground and fog surrounded us. The chill in the air seemed bearable at first, but I was unprepared. Snow just isn’t my thing. I took note:

Layering up is the best way to go because as you climb the mountain it gets hot and it doesn’t matter how cold it is outside– climbing makes you sweat. I was grateful to be able to peel off the layers. Luckily, anything I didn’t have, the tour guide had brought along for amateurs like me.

The climb was easy, although I didn’t have the right shoes for climbing. Running, yes, but climbing in the snow, not so much. 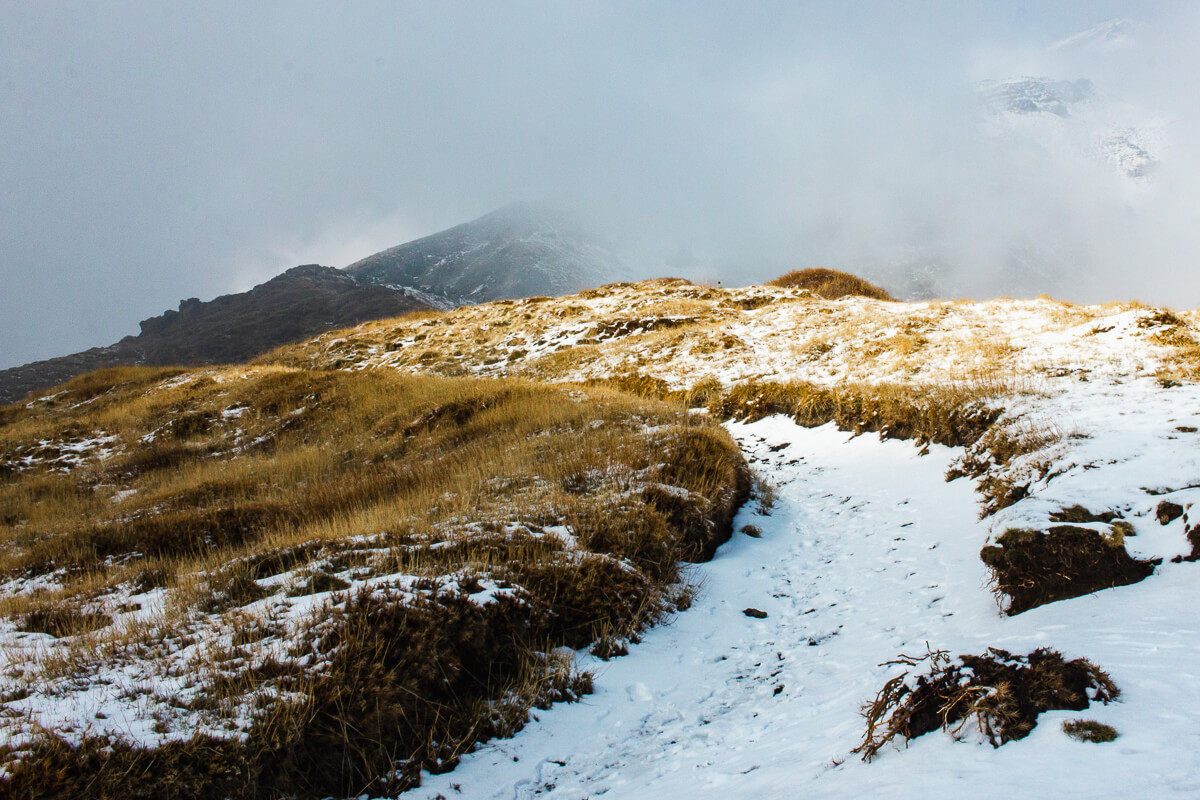 When you look around, the mountain looks dead covered in black rocks and contrasted with the white snow. It’s almost like a black and white photograph until you see the few plants that grow from lava rocks. Golden wheat, and the dreary remains of trees whose leaves have fallen until next season. Life, while dormant on this cold March day, continues on even after the lava flow.

As we continued the climb, we enjoyed what few views we could. The fog was thick that day, so we could only see so far down the mountain. It provided an eerie feel and maybe it would have been scary quiet if it weren’t for my heavy breathing trying to keep up with the group.

It would have been great if we could see further down the mountain, but I was content with being able to climb such a difficult hike.

Every time a view is involved in my travels, I think about Anthony Bourdain in one of his episodes. While taking in a popular view he seemed bored and uninterested. He much preferred to be indulging in a big piece of pork neck than taking in the views. It got me to thinking: is it the actual view that impresses us? Or is it the fact that we struggled to get to this view, the effort that we put into this view?

As we climbed further up the mountain, I thought a lot about it. What if I’m not awed by the view? I decided I would be ok if there were no view. The climb is reward enough.

We approached a lookout point of a crater known as Valle del Bove. Salvo made us close our eyes before reaching the top. He and Ignacio (who had climbed the volcano several times before) grabbed our hands and guided us as we held our eyes shut.

I opened my eyes and although the fog was creeping through the crater, and it was difficult to see far, a shock went through my heart as I gazed upon the wonder that was in front of me. A dark land that curved below us and then rose above us, frosted with white snow– a crater where lava once flowed, but now offered a glimpse into the reality of just how small we are as human beings. 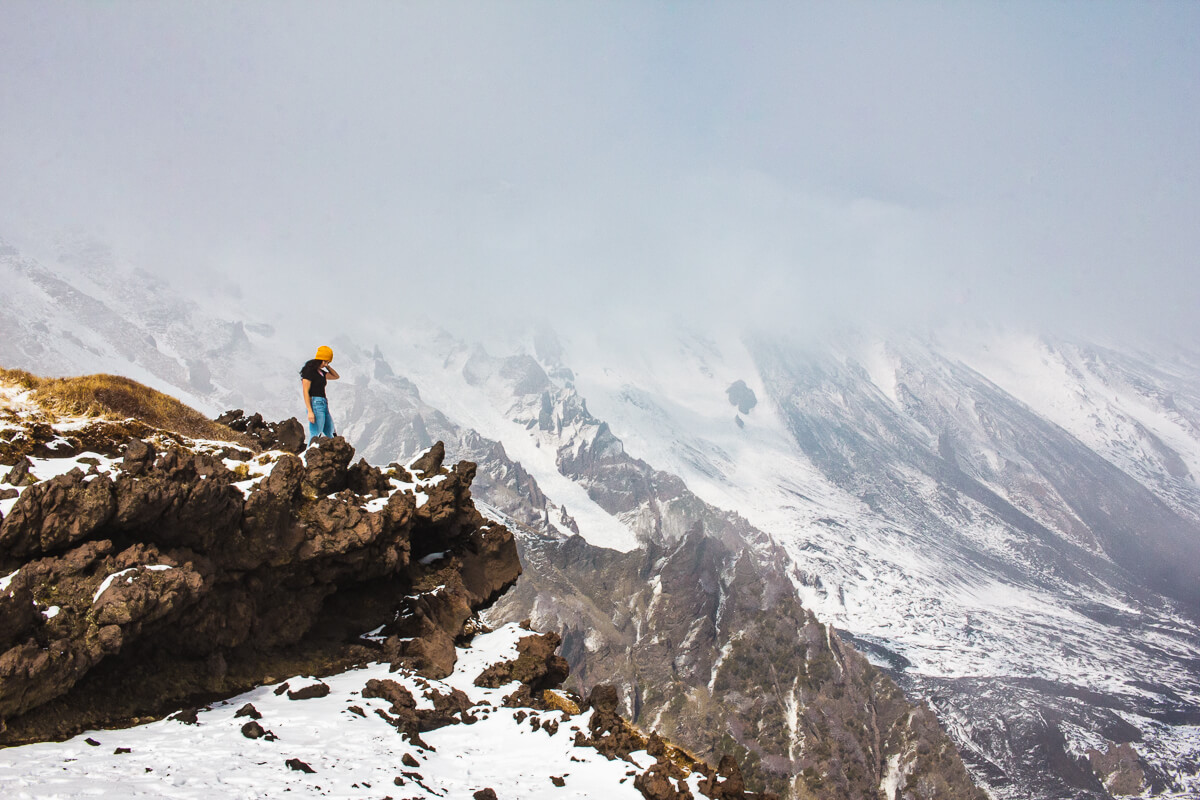 I have to respectfully disagree with Mr. Bourdain. Maybe it’s that the world is bigger than we know and we, small human beings in this vast universe, living among a billion other human beings, surrounded by mother nature that will continue to adapt and thrive long after we die, are just specks. That’s what a view does for us.

It was at this crater that I could hear the rumble of the volcano. Faint enough to be mistaken for wind.

After we descended from Valle del Bove, we stopped in the town of Zaffera where we indulged in a typical Sicilian snack, arancini.

From there we drove to the northside of the mountain where things got really hectic. 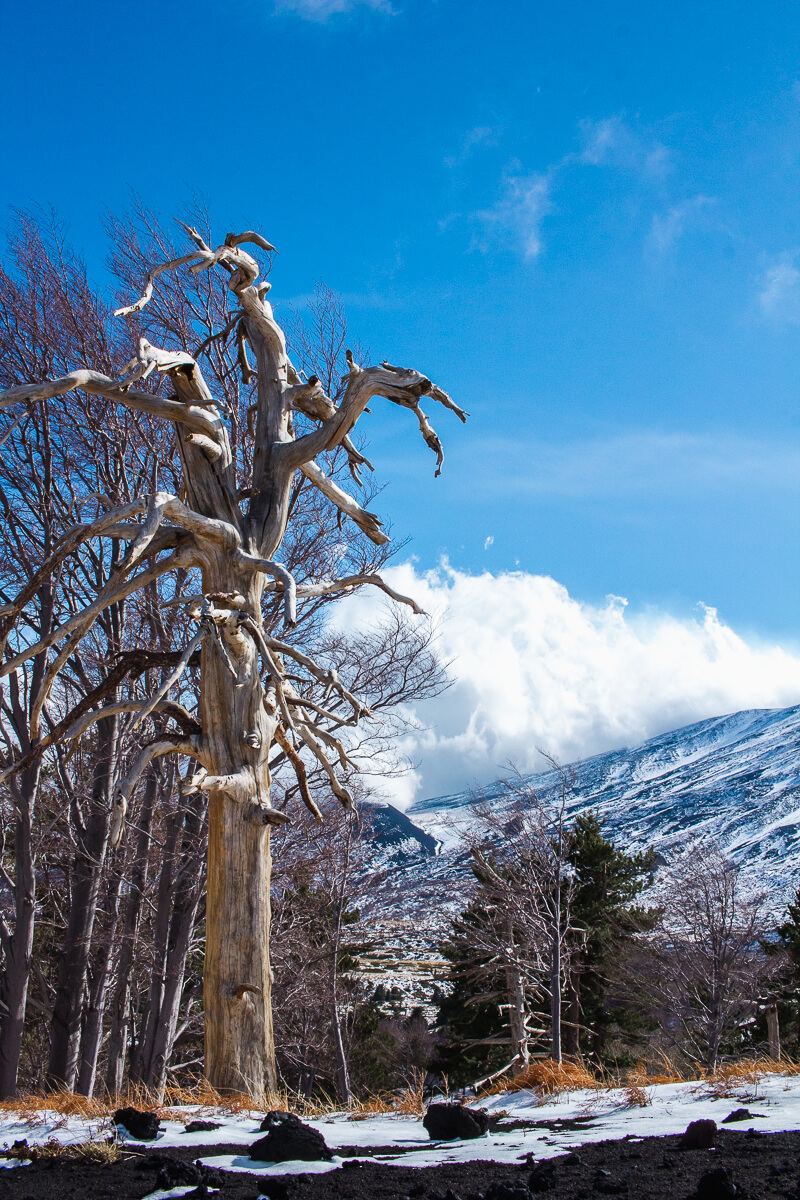 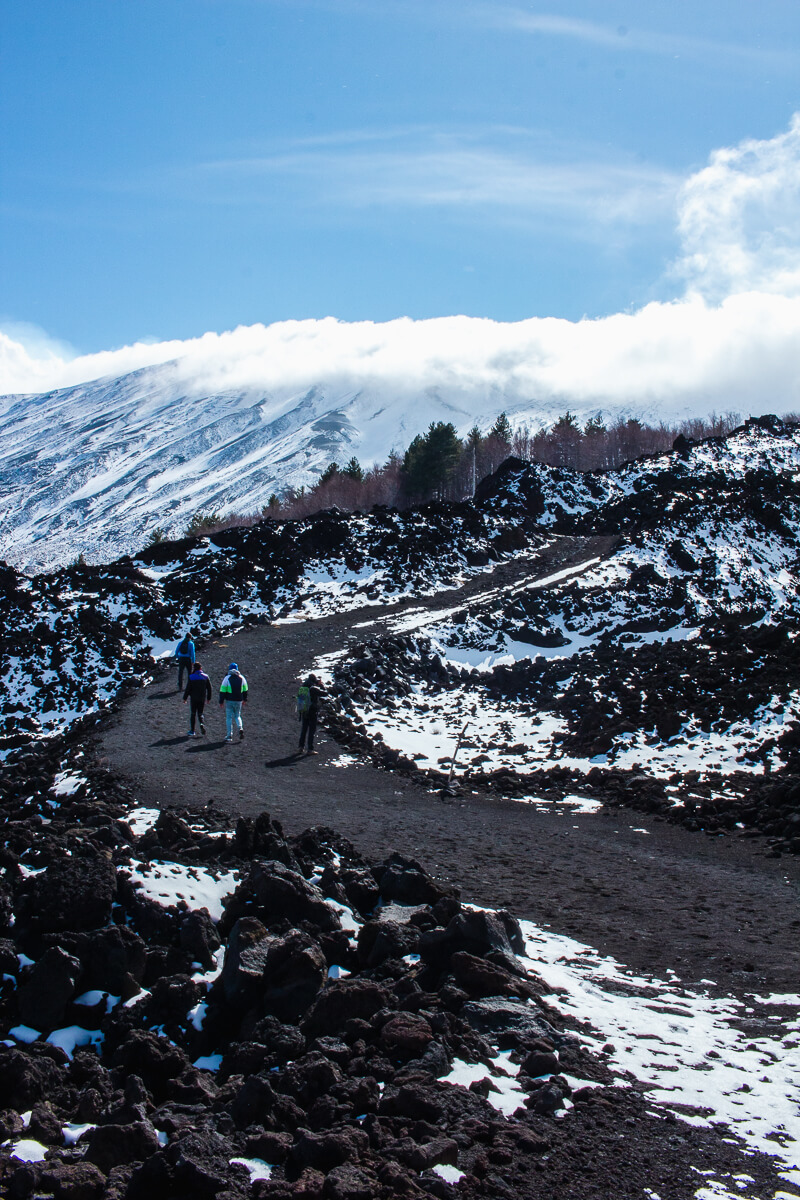 I thought I was fit. But being fit means nothing if you are unprepared in cold weather.

The ground was covered in black lava rocks, but as we ascended we veered to the right into a snow-covered path. It didn’t seem like a pathway, but I trusted my guide anyway. The snow was deeper and I could feel the cold seeping through my running shoes and two layers of socks. Unsure of where to step for fear of covering my whole foot in wet snow, I jumped from footprint to footprint left by my much larger companions. It was a steep climb, but we made it.

As we reached the top, the wind got stronger. So strong that if I held anything in my hands, I feared it would fly away. I even held onto my hat, which was snug against my head. The large crater we stood above wasn’t as pretty as the first one, but we could see far to the bottom of the mountain, to Taormina, a city below. It was difficult to see though because of the wind. It felt like the wind was trying to rip off my clothes. So we descended shortly afterward.

It was a long and tiring hike. Especially if you are not fully prepared. I’m lucky that Salvo had brought backups for useless tourists like myself.

That same night, the entire country of Italy went into lockdown. It’s like I knew deep down inside me that something like that would happen and I took a chance. I took a chance and went with four strangers to the top of Mt. Etna instead of my scheduled tour with the conference I had promised to attend. With the lockdown everything shut down, and I was forced to leave Sicily 9 days early.

But I got to climb Mt. Etna, a decision I don’t regret.