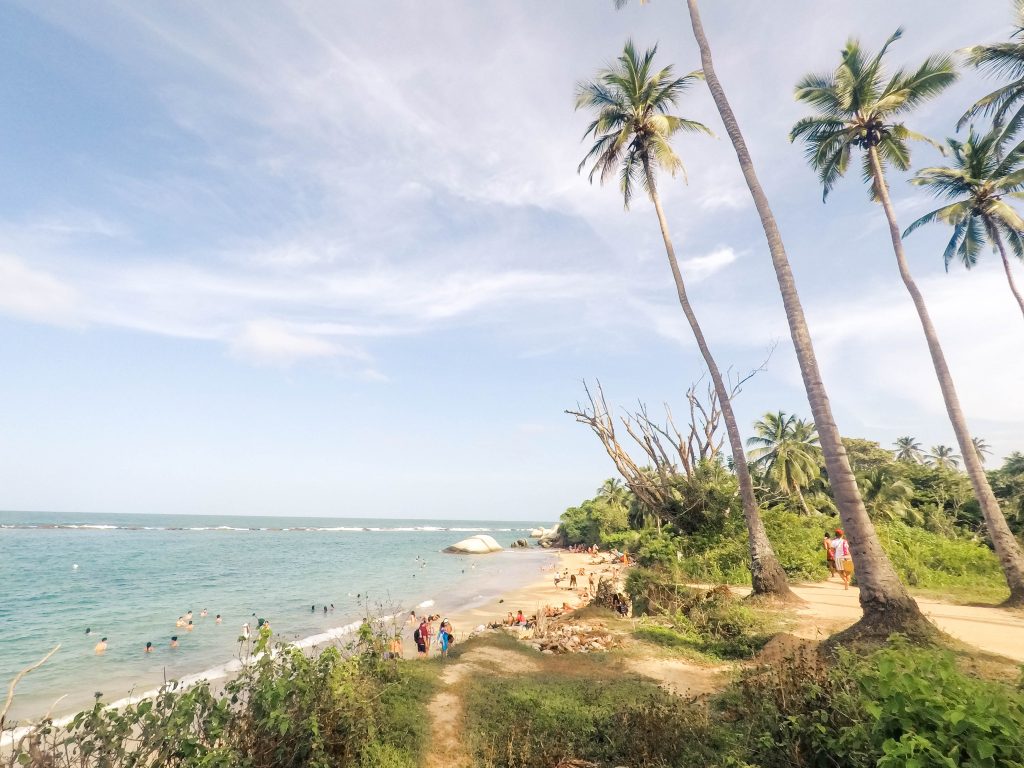 How I Ended Up on My Death Bed With Heat Exhaustion

The following story is the result of pure stupidity, dehydration, and naivete. Do not try this at home.

Tayrona National Park was peaceful, but it was starting to wear me thin. My money was running low and the park doesn’t have any ATMs so I decided to head back to the city instead of spending another night in the park. I had just enough cash to take the bus back after enjoying a day at the beach which I knew meant a total of 4 hours of hiking in the heat.

For breakfast, I had eggs and an arepa, a Colombian bread, and some water for lunch, but wasn’t able to afford a bigger lunch. Dreams of a big meal once I got back to the city filled my mind. It kept me going. I knew I would need the breakfast to make the 2-hour trek to the beach. Unfortunately, I accidentally took the path that the horses take, which is much more difficult and longer, using up all the fuel that I had eaten for breakfast, and all my energy.

When I arrived to the beach Cabo San Juan, I cooled off in the water and enjoyed the sun, but as soon as 3 pm hit, I had to get going. The last bus back to the city was at 6:30 pm and I wasn’t sure how many breaks I would need to take. After my trek through the jungle to get to the beach, I was still exhausted. The sun was strong, and I was drained. One can’t hike and live off of only fruit for two days.

At 3 pm I gathered my stuff and left Cabo San Juan. About 15 minutes into my walk I realized that I left my water on the beach. I contemplated turning back since it was the most expensive bottle of water that will be left unfinished sitting on the beach, but the energy and the time it would take to run back and collect it was not worth it. I made the trek back to my campsite, up and down hills, another 2-hour trek similar to the one I had done just a few hours before, only I had less energy and no water to hydrate myself with this time.

The sun beat down and the sweat drained me of my liquids. I ordered a $3 freshly cut, freshly squeezed orange juice from a lady on the beach to satisfy my hunger and my thirst at one time, then continued on my way. Was this where I went wrong? I constantly wonder. I watched the clock carefully but had gotten stuck behind several families who were taking a steady pace back to their campsite. I made it back to my own at 5:30, but I still had to walk another half hour to the bus station, this time with all my things in tow.

As I watched the clock, I knew I wasn’t going to make it in time with the pace that my exhausted body was going at, so I hitched a ride until I got to a bus.

A couple hours later, while sitting on the bus, every bone in my body began to ache. The 4.5 hours of hiking, 2 of which were done without a drop of water, that day were catching up to me. I still didn’t have water. When I arrived to my hostel, I was covered in sweat, dirt, and dust, but most of all, I was freezing. The heat and humidity of the night meant nothing to me. I bought a water from the hostel, but my stomach instantly denied the water. I ended up in the bathroom. Every drop of water I drank resulted in my body rejecting it.

I wanted to wash the sweat off of me, the salt, the sand, the dirt, the everything from the long day. I was looking forward to a shower cleaning everything off of me. The new town I was in is humid though, which means that there is no need for hot water. I didn’t realize this would matter until I got in the shower and all I could feel was a bucket of ice being poured over my head. I screamed internally. My body began to convulse and I couldn’t stop my muscles from shivering. I dried myself off and put on a pair of long pants and a long sleeve shirt, still shaking.

Knowing that I hadn’t eaten a full meal in a while, I went with a friend to get some real food: chicken, rice, and plain potatoes. My body needed some form of energy, and usually, food fixes everything, but not this time.

The man who cooked the food brought my friend a soda, but I knew soda wasn’t going to do me well. Halfway through the meal, the man came back to the table and asked me if I was sick. I paused, realizing that I was indeed sick, and it was obvious from my appearance. He came back with a cup of cold water. I politely declined. Memories of the cold water shocking my body in the shower filled my head and all I could think was that drinking cold water would destroy me from the inside out. I asked him if he had room temperature water. He came back with a bag– the Colombian version of bottled water– of the least cold water he could find. I accepted it, hoping that the heat of the night would quickly warm it.

When we made it back to the hostel, my body decided to reject the water I had taken in. No matter what I did, liquids just wouldn’t stay and if you are losing liquids faster than your intake, it could be deadly. I was too weak to care.

Before going to my room, I saw some friends deep in conversation: “We’re getting deep, here,” one of them said.

“I love getting deep,” I joked.

“Was that a euphemism?” my friend asked. I weakly laughed at my dumb joke, did a weird somersault on the futon they were on, and realized that I was delirious and everything coming out of my mouth wasn’t going to make any sense. I went to my room.

I crawled under my bed sheet, shaking uncontrollably and my forehead on fire, but I wasn’t sweating. All liquid had escaped my body and my heart was beating fast. I feared to drink more water as my body wouldn’t absorb it, so I avoided it. I knew I needed a doctor, probably one of those needles that they stick in your arm, a bag of liquid dripping into my body, but the hospital was a 20 minute bus ride away and I could only muster up enough energy to hug myself under the covers and ask for the fan to be turned off.

I know how to break a normal fever, but this wasn’t a normal fever. I researched heat stroke, and heat exhaustion and found I had all the symptoms, but the only surefire way to know was if my temperature was 104 degrees. I didn’t need to take my temperature to know that I was at a deadly degree. If it was only heat exhaustion, it could turn into heat stroke if my body didn’t cool down, but cold water scared me and I couldn’t find the words to ask for a wet towel. Covered with my sweatshirt, long pants, long sleeve shirt, and a sheet, I fell asleep to the thoughts of death, and what happens if I don’t wake up? What a sad way to die.

The next morning I was surprised that I woke up. I was not better. My bottle of water still sat next to my bed, a quarter of it gone, not in my body, but back down the drainage system with all the other vitamins and nutrients that my body no longer contained.

My host, Ximena, found me weak in bed and instantly turned into a nurse. She brought me a tea concoction of mint, mango, garlic, and some other stuff– it settled my stomach. My friend brought me a gatorade– it gave me electrolytes. I finally took some medicine, then slept some more. I finally got out of bed at 5 pm to eat some soup. I wasn’t 100% yet, but the worst of it was gone. I was still too weak to open a bottle of water, but my body wasn’t shaking, and water stayed in my body longer than before.

My diet for the next couple of days was plain rice and soup, accompanied by small sips of water. I still couldn’t drink a full bottle of water, but I was able to get up and walk to the store and get my laundry done. I avoided the sun as much as I could, something I’m not known to do, and took it extremely easy. Soon I was able to eat a bowl of fruit, then a full meal and all liquids stayed in my body long enough for me to finally start traveling again. I was completely transformed.

One lesson I learned from everything was that the body is amazing at healing itself as long as you get enough rest and then slowly introduce it to vitamins and liquids.

I also learned that I am not as strong as I thought I was to take on a 4.5 hour hike in one day, and certainly not without water, and have decided to start focusing on my physical health more as I don’t want to be as weak as that day.

Have you ever been sick while traveling? How did you overcome it?