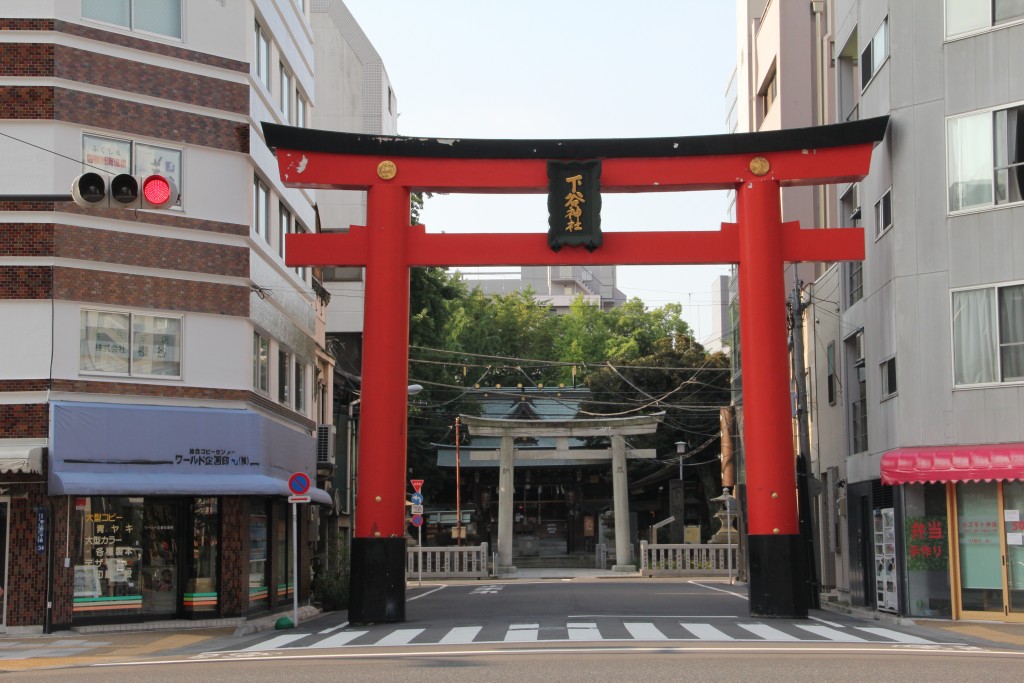 My First Step Out of My Comfort Zone | Landing in Japan!

My landing in Japan was less smooth than anticipated…

Moving to another country can be nerve-wracking. While sitting on my eleven and a half hour flight next to Christian Fletcher, Nathan Fletcher’s brother, I began to feel less nervous and more comfortable as he described his own experiences as a foreigner in Japan. That it’s the best country he’d ever visited full of the nicest people you’ll ever meet. Coming from a chill-ass, California, surfer dude I began to think I would never run into any problems. Tourists travel here all the time so there are English speakers, what could possibly go wrong? The service with Singapore Airlines and their hot towels may have also played a part in my false relaxation. I mean, it wasn’t a disastrous first day, but it went less smoothly than I had anticipated.

Because I am a visa holder rather than a visitor, it took me an hour to get through immigration. It began with a twenty minute wait in line only to be redirected as soon as I made it to the front and handed my passport over to the guy who simply got out of his little box and walked away. When he came back another man spoke Japanese to me and led me by the elbow to another waiting area almost as if they had to speak to me about some issues with my visa. Did my credit card company finally find me and stop me from entering Japan? Is it another bill that I forgot to pay when I left? Did I spell my name wrong? But it was only procedure. I was placed off to the side with the rest of the visa holders where we all sat jet-lagged and anxious to make it through before the last train left. Attempting to be social, I decided to try and make some new friends since we already had the foreigner card in common by making casual conversation. My questions, however were returned with blank stares. They looked at each other, then at me. Turns out they were French and didn’t speak English. I was never very good at being social…

Customs was easier, well, because my bag was waiting for me for an hour. So what did they do? A nice lady who worked for the airport and only spoke Japanese had met me at the bottom of the stairs, pronounced my name perfectly and escorted me to where my bags were sitting alone in the middle of the airport. I’m royalty, I know.

But who cares, right? What you want to know is that as soon as I finally stepped out of customs, I was struck with the fact that I am in Japan because I can’t read a goddamn sign. So much for English being everywhere. It wasn’t even a “Wow! I’m in Japan!” It was a “Why the f**k is everything in Japanese?” The phrase “It’s like I’m reading Japanese” has never been more true for me. I found the train, great, but which way do I go to catch the right train? If you ever travel to Japan and you also don’t speak any English, make sure to look up the train times and prices ahead of time so that you know you’re not getting jipped. The guy wasn’t trying to one up me I’m sure, but he did offer me the higher price first. Luckily, I had done my research and had known that there was a longer, cheaper, route. I finally found my train and headed to Asakusa where I spent the night in the Oak Hostel. 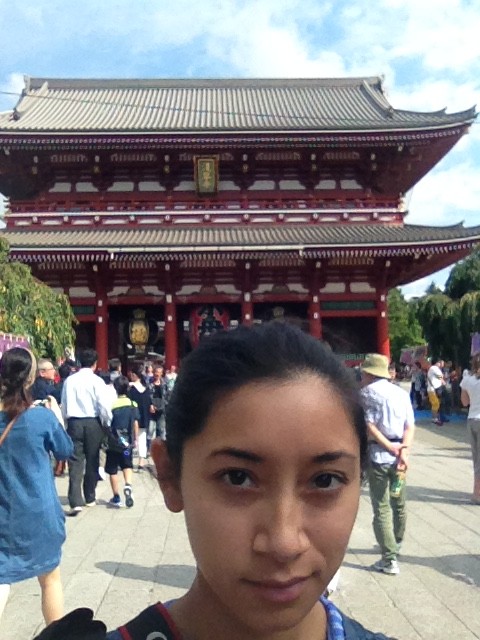 Finding the Oak Hostel was harder than I had thought. The website had provided me with the kind of directions that you don’t see in this day of technology anymore: “turn left until you see a hamburger shop, then turn right. Continue until you see a Family Mart. Keep going past it. Then go 100 meters and make a quick left. We are at the end of the alley.” I mean, it’s not like I can read the street signs anyway, so I guess it was useful, but I did pass the place without realizing it. I ended up having to stop and bother a couple of people who didn’t speak any English. Finally, a man and his dog walked me to the hostel which ended up being a block away.

All in all, I realized you really do meet the nicest people here. 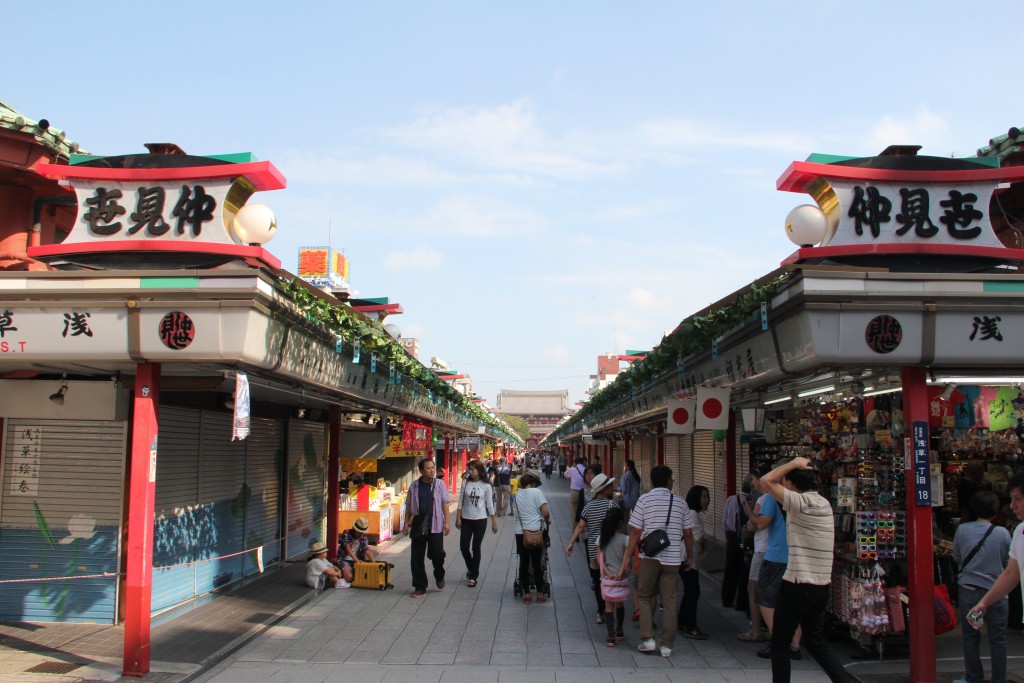 Walkway up to Sensoji

It never really hit me that I was in Japan until much later. Coming from a tourist city, and then staying near Tokyo where tourists gathered, it never felt any different. I was simply moving to a another apartment.

The next morning was my first actual day in Japan so I did a bit of exploring. While I had done some research on Japan, actually seeing and experiencing it made me feel like I hadn’t done any research at all.

There were certain things that I soon came to realize on my first day: 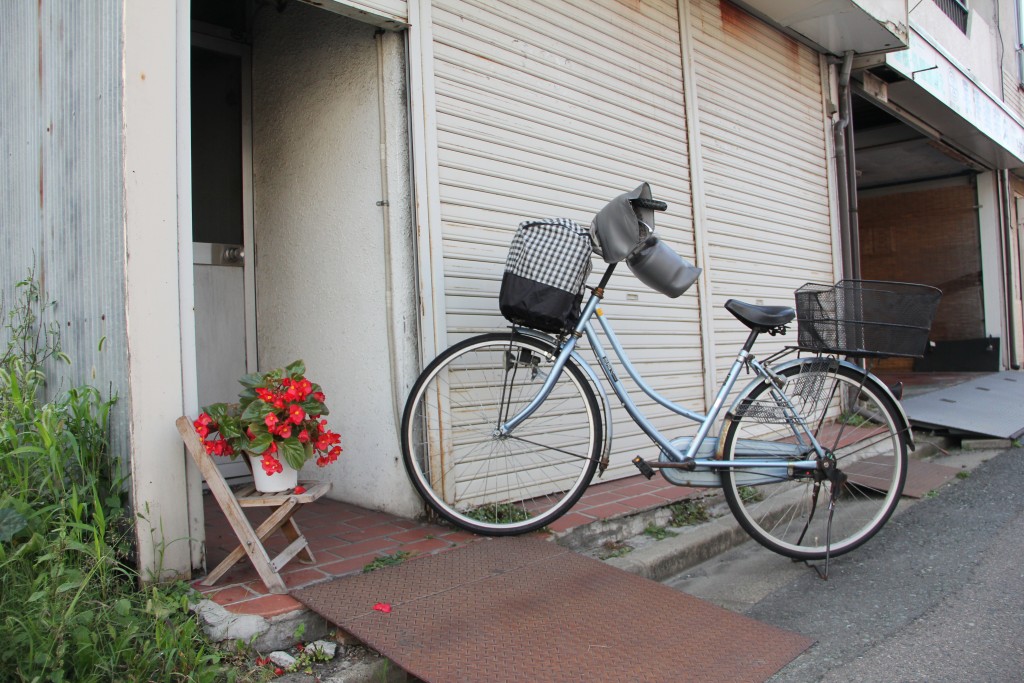 These were just the minor things that I noticed when I arrived. There’s so much more to say about the culture and everything that I’ve seen so far I can’t put it all in one post! Stay tuned for more!