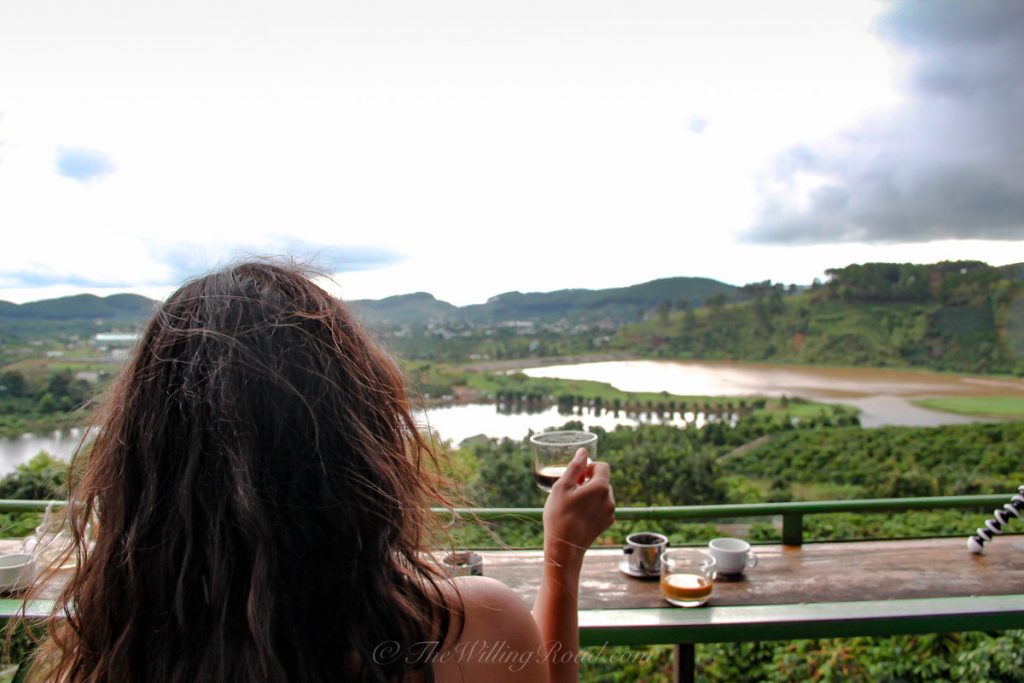 I’ve been stopped by the police a few times in my life: speeding, rolling through a stop sign, friends who pee in public while intoxicated and other random excuses. Being stopped by the police in Vietnam was another encounter for me to add to the list, but it’s not quite the same as in America…

We had been warned by others that the police like to give people a hard time in Mui Ne, backpackers and locals. We had a choice to make though: see the gorgeous shores of Mui Ne and risk it, or head straight to Dalat. Since we wanted to see Mui Ke Ga, we figured we might as well stop in Mui Ne. 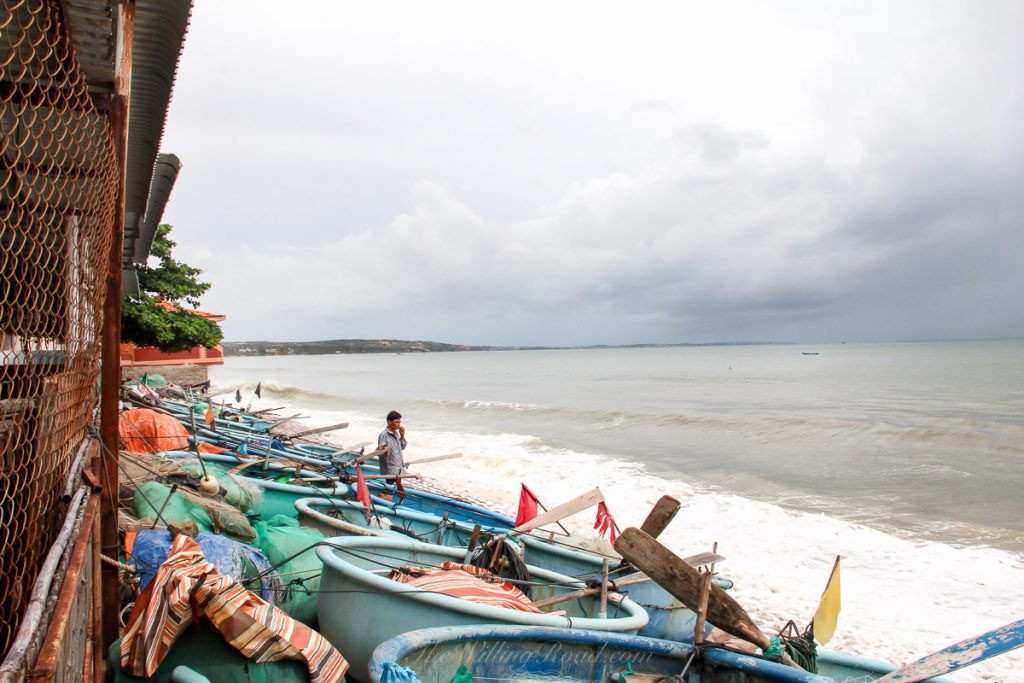 Unfortunately, we weren’t as impressed by Mui Ne as we had hoped, as it had become overrun with westernized restaurants and shops. The beaches were probably lovely but it was raining, so we hardly got to see them. We left after one night.

As we were leaving the little town we drove by red sand dunes, white sand dunes, and more villages with the ocean level with the highway. It was in that moment that we felt so free and amazed by what we were accomplishing. With the breeze moving the ocean, the palm trees gently bending with the wind, I constantly looked over at Dianna who I caught smiling. We were thinking the same thing: This is why we are doing this. This is life. 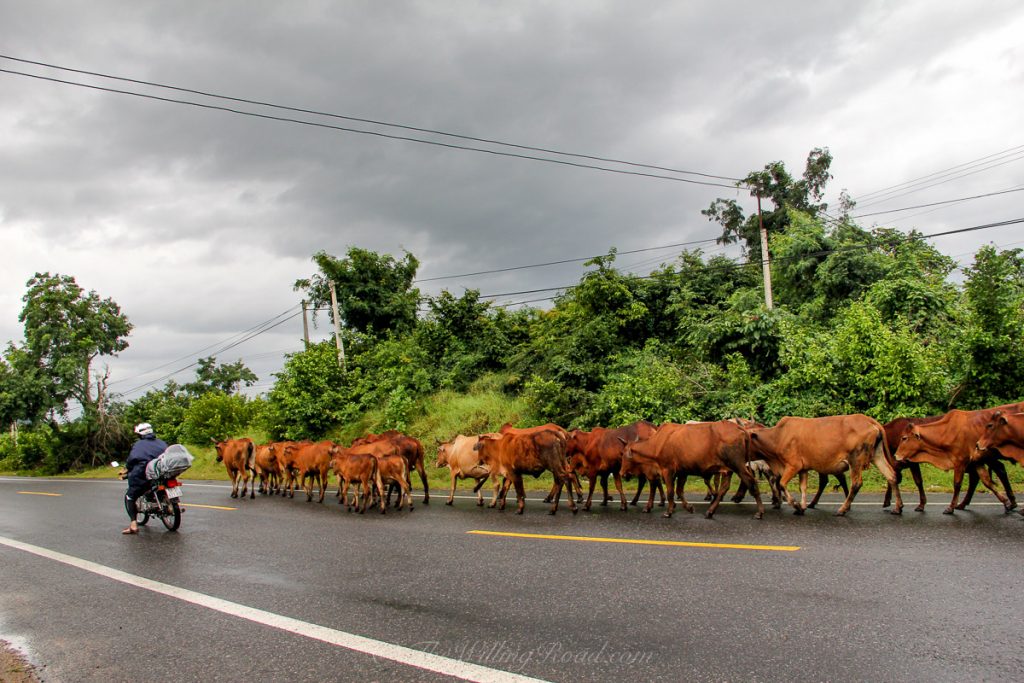 Dianna driving by some cows on the highway

But it was quickly destroyed.

The motorbikes in front of me were slowing down as we turned the bend and I saw the boys in beige that I had heard so much about. Set up like a DUI checkpoint, the police were doing random checks of motorbike drivers. The local Vietnamese in front of me were stopped and pulled to the side. I braced myself, aware of my foreign face, but the police man in green waved me through with a quick circle of his wand. I hesitated, but the gesture was correct. I was free.

But Dianna was not.

I saw her be pulled to the side in my mirrors as I continued to drive straight down the road, searching for a place out of sight where I could wait for her. However, my attention was soon brought back to the road as a police officer in beige pulled up beside me on his own motorbike. “Pull over,” he said in English. I acted dumb and said, “Perdon, no entiendo,” and continued to drive ahead with him beside me. He gestured to turn around and said “Follow me.” Tugging at my Spanish speaking abilities after one year in Japan, I turned my bike around and pulled up on the opposite side of the road from Dianna. “My friend?” the police officer asked, pointing toward Dianna. Ignoring his bad English, I continued to look confused, especially since I knew in that moment that Dianna was speaking French. How the hell are one Spanish speaker and one French speaker going to be friends if neither of them speak English? Lying is not our best feat. They pulled out a binder full of pictures of international licenses and Vietnamese licenses, all of which we did not have. It is illegal for foreigners to drive without a Vietnamese license. We continued to act dumb, flashing 100,000 VND but it was 1,000,000 VND (44.77 USD) that they wanted. When we communicated that we didn’t have that much, they instructed us to follow them to an ATM or take our bikes, of which we continued to feign miscomprehension. Somehow we were able to knock it down a measly 900,000 VND upon which they shooed us away, fed up with us. We couldn’t get back on the road fast enough.

Our egos were shot. We had known about the consequences of visiting Mui Ne and yet we took the risk anyway. Even Vietnamese locals had warned us. The police had given us quite a hard time and that’s when we felt the full weight of being a female while traveling in a foreign country: women are not meant to be free on the road the way we are. Women are meant for babies, for cooking and cleaning and taking care of their husbands. Not negotiating with police and riding motorbikes for long stretches at a time.

For the half hour after having encountered the police, we tried hard to bring our spirits back up. Tried to chalk it up to “another part of the experience” but it was tough. It sucks to have to hand over money to the police, it sucks even more when the reason they are less respectful is because of your gender.

Leading the way, I accidentally continued straight instead of following the road, my mind somewhere else. The sun had broken through the clouds and I couldn’t deny the beauty but we needed more. We stopped and that was when we made a spontaneous decision, “Why didn’t we just go to Dalat?” we questioned ourselves. Out of curiosity we looked up how far it was and found it wasn’t too far off.

“Fuck it, let’s go to Dalat.” We needed friends that could take our minds off the police, and some old friends were driving their own motorbikes up to Dalat. We threw out the directions to Nha Trang, switched on our GPS and booked it to Dalat.

What can I say about the drive up to Dalat that wouldn’t bore you? There was a storm. The wind was blowing so hard it was pushing my bike to the side. Then the rain started and we couldn’t see. We took cover on someone’s porch which turned out to be a rest stop for drivers along the highway, ate some rice and chicken as we were lacking in carbs, and as soon as the rain cleared, drove off again. But there was more rain and more rain and more rain.

And then it cleared.

We arrived in Dalat late at night, found our friends, and passed out. The rain had affected us physically and had also caused some landslides on the road out of Dalat so we ended up spending more time there than anticipated. What a beautiful place to get stuck in, though. 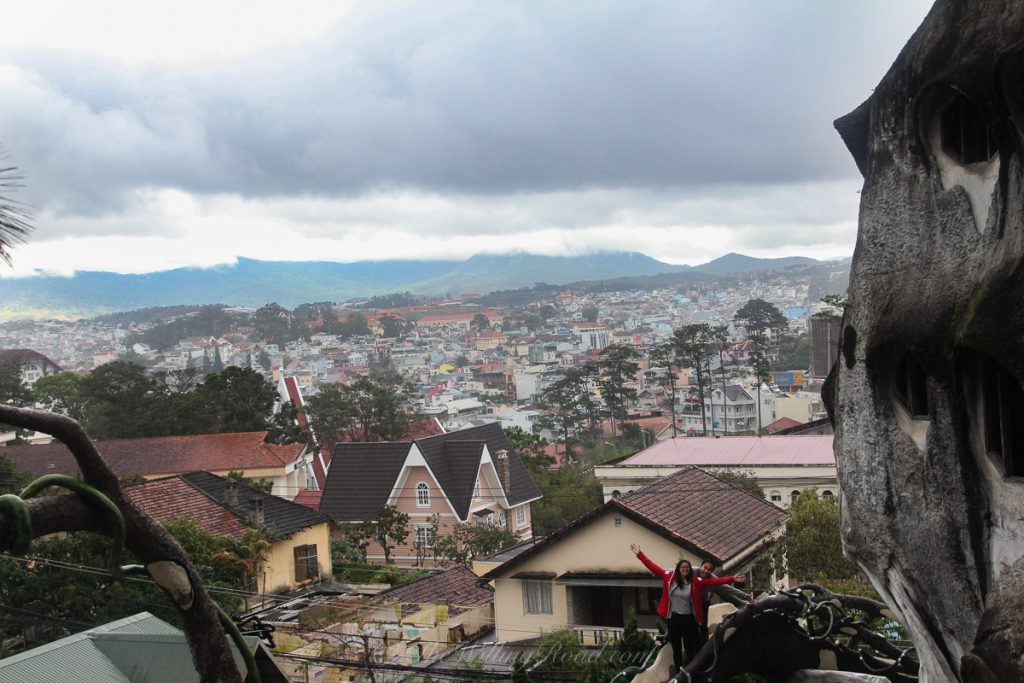 Having fun at the Crazy House in Dalat

We drove through the mountains, went to waterfalls, walked along the lake, went to the market… it was an amazing few days and it was great to hang out with more friends who were also going through the same pains of travel as we were. So we all decided to stick together and travel North.