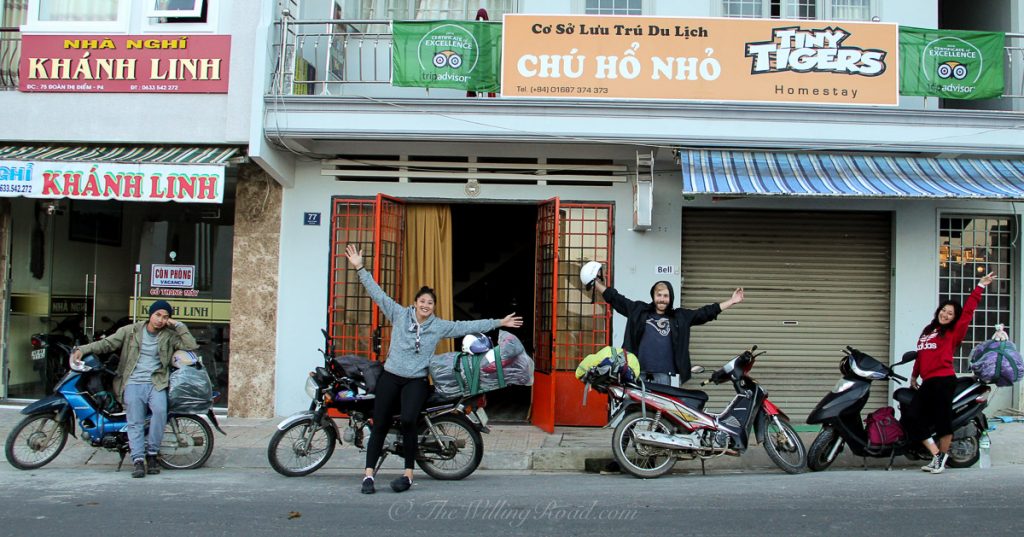 So after Dalat, we became four, two guys and two girls. Each of us with our own roles to contribute to our long travels: Nick is great at navigating, Dianna is our translator, Lenon has all the technology to help us get by, and then there’s me. Well I guess I’m here to document our travels and ensure our families back home know we are safe. Together we hit the road again.

Unfortunately, a storm had passed through causing landslides on the direct route from Dalat to Nha Trang, the QL27C aka the DT723. We had already spent an extra 2 nights in Dalat because we were waiting out the storm so instead of waiting for the roads to be clear we decided to continue our travels by going around along a different route, through Cam Ranh. Because Dianna and I had decided to change to Dalat last minute, this was like backtracking for us, but we didn’t mind due to the beautiful scenery.

The QL 27 was the most beautiful highway I had ever been on. The highway curves around the mountain so that you are surrounded by lush greenery as well as have an amazing view of the town below. The constant twists and turns made it difficult to enjoy the view as well as make any stops on the side of the road for pictures, but the view was much better than being surrounded by nothing but highway pavement. It was also a tricky mountain because you are sharing the curves of the road with large trucks and buses (watch out for the orange ones, they’re ballsy).

Once back on flat land we drove through small towns, avoiding as many potholes as we could, stopped for a quick coffee and yoghurt where Lenon and Dianna’s bikes toppled on top of each other, passed through some well kept garden-lined roads and finally made it to Nha Trang.

Nha Trang was much like Mui Ne: westernized streets full of a lot of tourists. When we were walking to the beach some backpackers who did not have the same skills and intuition that Vietnamese people have were driving on their rented scooters down the street and almost hit us while we were crossing the street. I felt more in danger there than in Ho Chi Minh City. The beach was not very clean, but maybe because Nick, Lenon, and I are all from California, we weren’t as impressed. Lenon and Dianna had some work done on their bikes after their mini accident and after one night of drinking beer and hanging out with other travelers we hit the road again.

On our way up to Quy Nhon we made a few stops. Our first stop was at Doc Let Beach, a beautiful beach we had heard a lot about. 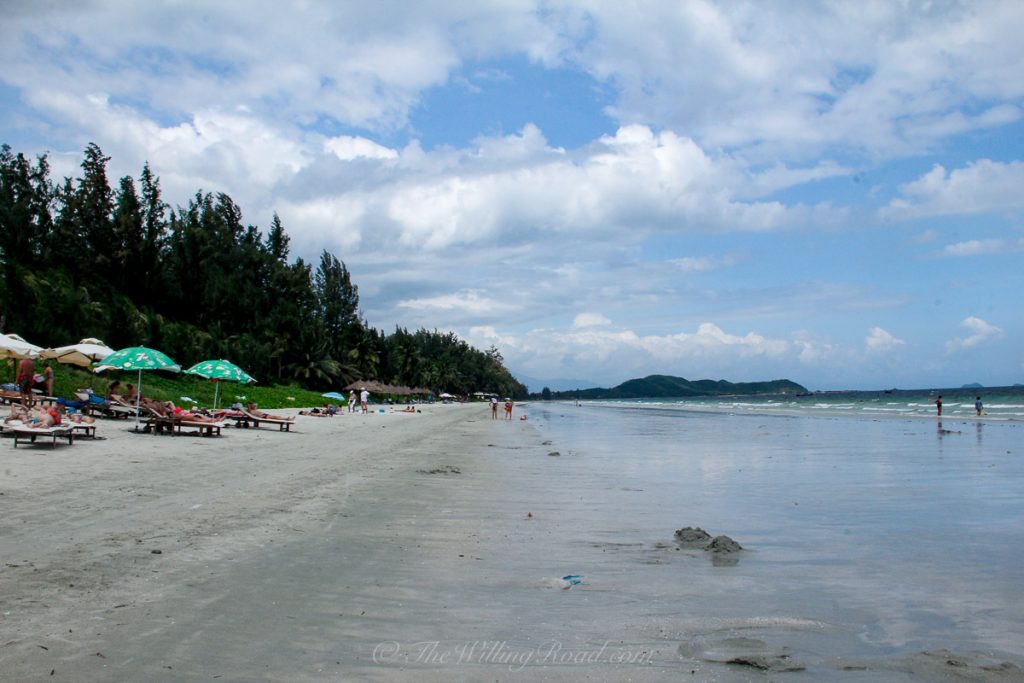 In order to get there you must drive through some small villages and roads, something that you wouldn’t just stumble upon on your own. The sand was white and the water was blue making it a much better beach than the shores of Nha Trang already. Unfortunately we knew we had some time to go before the next town so we rested a bit, taking in the views and enjoying the water, then headed out again.

We were driving along the AH1 the majority of the way up but on our way up to our next town, Tuy Hoa, was when we realized we shouldn’t be driving on this road. We saw some amazing gorgeous blue oceans contrasted against some reddish brown and green islands while driving but safely stopping was not possible. The road curved around the cliff edges and was overpowered by large, loud, and aggressive trucks. It was a road not meant for small motorbikes like us but people did it all the time due to time constraints. On the day that we were traveling to Tuy Hoa there was an accident on the one lane road. Traffic was at a slow crawl and the only thing standing between us and the steep drop down to the ocean was a measly guardrail (sometimes). In that moment I was happy to be driving an automatic (I know, I’m cheating) because the constant stop and go while crawling uphill alongside large trucks was stressful enough that driving a manual motorbike would just add to the pressure. Everyone else was semi-automatic and manual. Dianna stalled at least once, probably more but I couldn’t pay attention as I had to stay alert to, not only the trucks, but also the people inside the trucks. Many trucks’ windows were open as we were passing by, men hanging out and yelling out at us, whether it was to tell us of the danger or for other reasons, we weren’t sure– we didn’t stick around long enough to find out. At one time, I pulled the backpack on my back to the front of me in case someone tried to grab something while I passed. Once we passed through that cliff though it was smooth sailing from there. Nick– an experienced motorcyclist back home– decided that we should never get back on the AH1 again. 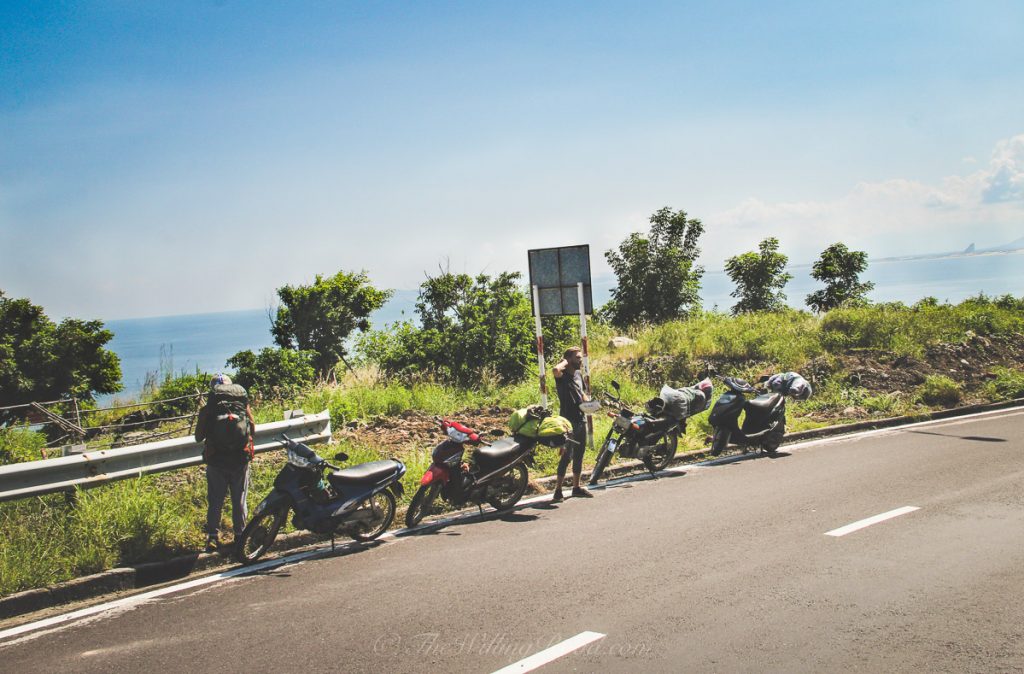 Resting and taking in the views of the ocean

We arrived at Tuy Hoa, a small town known as the halfway point between Nha Trang and Quy Nhon. It was a small beach town although the beach looked like it had been trashed. We had arrived later in the night so the beach wasn’t in much of our interest but the town was very romantic with colored street lamps lighting the way. We didn’t spend much time there though since we were eager to get to Quy Nhon.

Before getting to Quy Nhon, we made a quick stop at Ghanh Da Dia, a reef which had a unique rock formation on the water. On our way there we passed through small villages, but this time Nick got a nail in his tire. 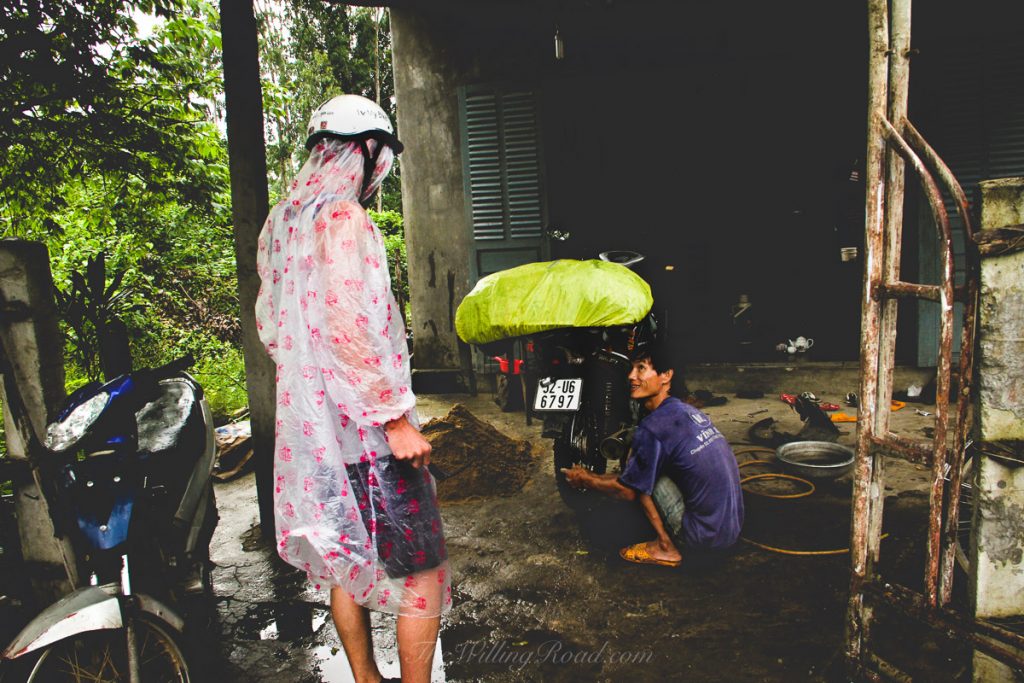 The mechanic had a thick accent but he was nice and fixed the bike immediately.

Luckily there was a mechanic not too far away so we made a quick 10 minute stop to fix the tire and continue on our way to Ghanh Da Dia. Once again, it was a place that you wouldn’t stumble across if you were simply traveling by bus or plane. The water was gorgeous and the views were amazing. Apparently it’s a famous filming location for a Vietnamese movie. After taking in the views we headed out again. 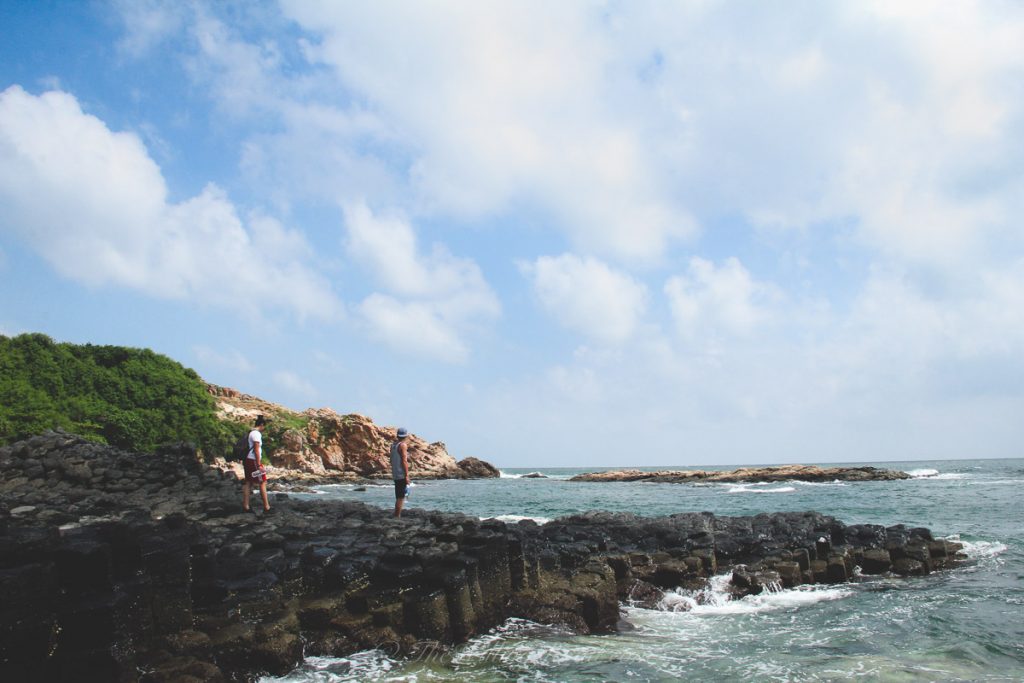 Ghềnh Đá Dĩa, a reef just outside of Nha Trang

Quy Nhon is another beach town. We ended up staying out at Bai Xep beach about a 20 minute drive outside of the city which meant that every morning we woke up to a view of the ocean waves crashing against the shore. We spent lazy days lying in hammocks, walking along the beach, eating banh xeo for breakfast and the best fried rice I’ve ever had. 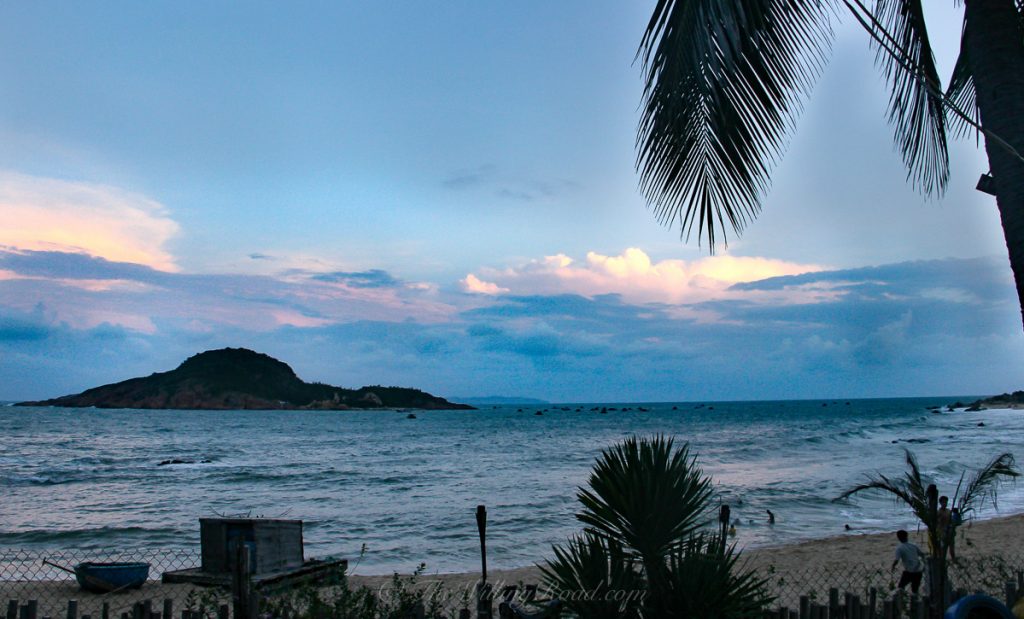 Sunset from our doorstep

Then we hiked up to some waterfalls and spent the day swimming in the natural pools with a view of the ocean in the distance. The area was also quite secluded so the Vietnamese people there did not speak much English. We spent 3 glorious days there. It was the perfect mix of relaxation and adventure. 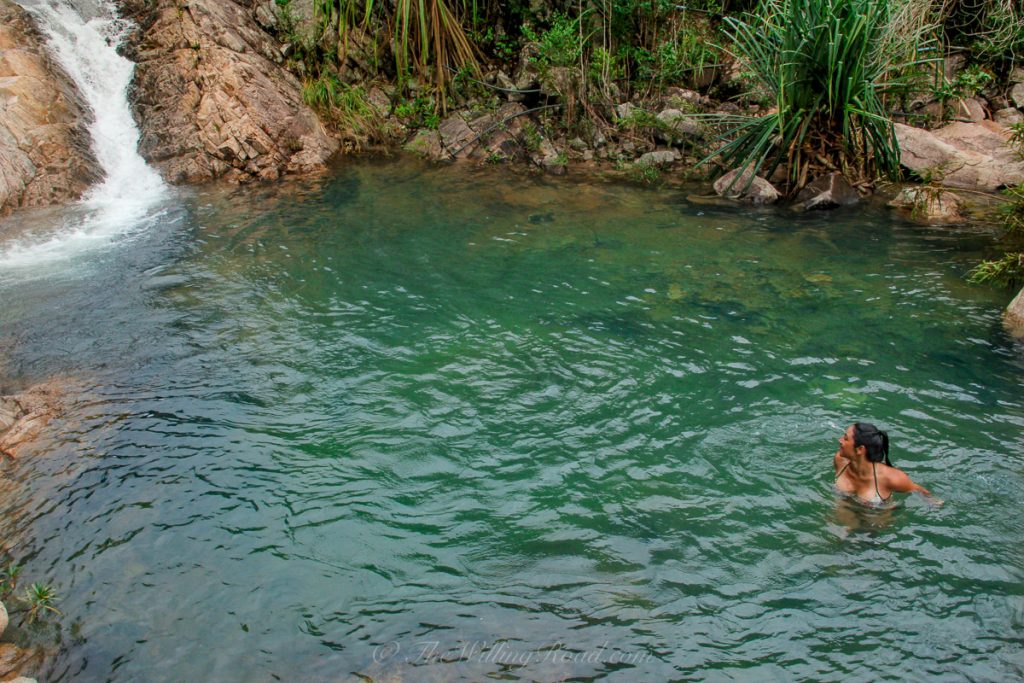 Swimming in the natural pools above the big waterfall

Ah, but all good things must come to an end. With the freedom of driving yourself mixed with constant relaxation comes the sense of anxiousness for getting back on the road. I could feel myself getting comfortable and resting too much from driving. I ached for the thrill of the road, for the skilled maneuvering that was only getting stronger with each trip between cities. It was time to go again. We mapped out our route and rested for our early departure to Hoi An the next morning.