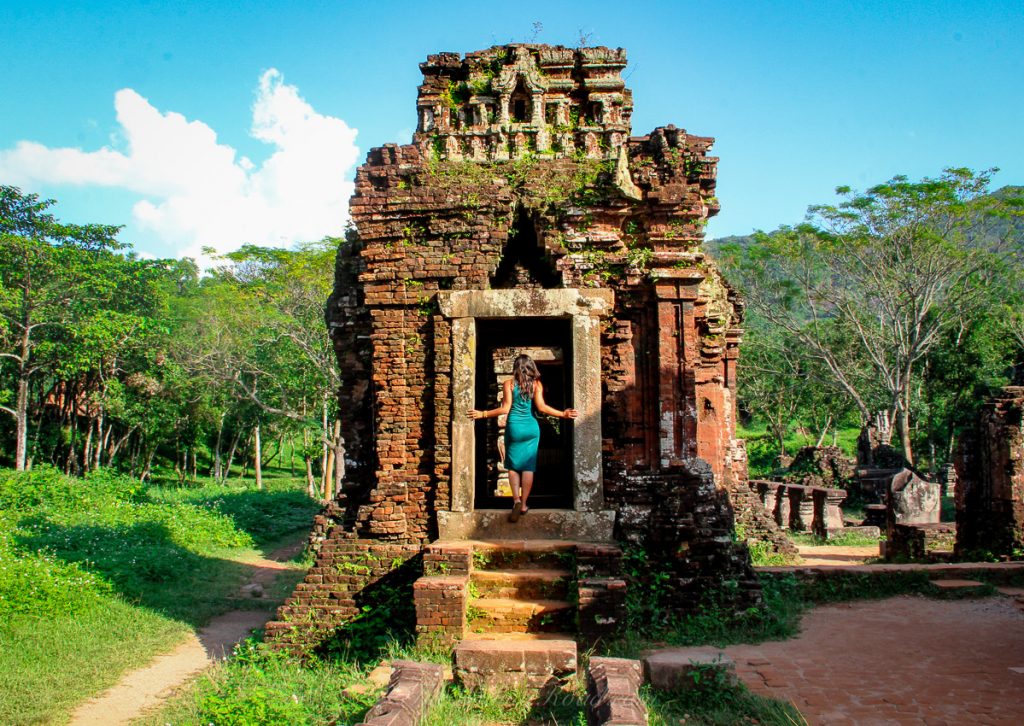 There’s a lady who owns a food stand selling bành xéo just down the alley from where we stayed on the beach in Quy Nhon. Every morning during our stay we went to her stand, ordering two at a time. The morning that we left Quy Nhon, we ordered 3 each. We had a long road ahead of us.

Dianna and I were a pair again as the guys we were previously traveling with had moved on ahead since they were on a time limit.

Road to Hoi An

The night before we left we met a couple, Stacie and Wade. We needed an oil change and lucky for us, Wade had the tools and the knowledge to do it for us. He changed Dianna’s oil but when he got to mine, the nut was too tight and his tools weren’t able to open it. Instead,  he opened the dipstick to check the level and the color, “It’s a dark honey color so you still have a bit of time to change it.” We decided to wait until we saw a mechanic on the road. He placed the dipstick back in and tightened it.

We loaded up our bags as the sun was peeking out from the horizon, the ocean like liquid mercury.  It began to rain as we ate our breakfast but we couldn’t stall any longer as we had about 300 km (186 miles) to cover before dark.

While I was driving I could smell the normal fumes of traffic: burnt rubber, exhaust, gas and more pollution that filled our pores every day. At the sight of a gas station sign I stopped to fill up. Unfortunately, that’s all that it was– a sign. The fumes from traffic were extra strong.

“What’s that smell? That’s not me is it?” I asked Dianna.

“No, it’s the traffic, it smells like that,” she reassured me.

Continuing along the highway it began to pour buckets in the typical Vietnam fashion. I pulled to the side of the road and once again I smelled the fumes from before but we were not in a congested city anymore.

“What’s that smell? Are you sure it’s not me?” I asked Dianna again.

The first time I had my oil changed in Ho Chi Minh I watched the mechanic loosen my dipstick with pliers as well as tighten it with pliers, which we did not do this second time around. Sometime along the road from Quy Nhon my dipstick had fallen out. My oil was burning and evaporating into the already polluted air of Vietnam. Having dealt with this before in my own car back in America (I’m experienced in the art of breaking vehicles) I threw in some oil that I kept with me to hold me over until we could find the next mechanic. We found a guy with an extra dipstick on the second try (the first guy almost took the one off his own bike to give to me, but then was like “nah, f*** this dumb foreigner” and didn’t) and he gave me a proper oil change… well, oil refill as all the oil had evaporated. As the nut fell into the can, the mechanic and I sat there waiting for the oil to follow but nothing came out. All I could do was smile nervously as he glanced at me with judgmental eyes: Heh… so, uh, at least I made it here, right? 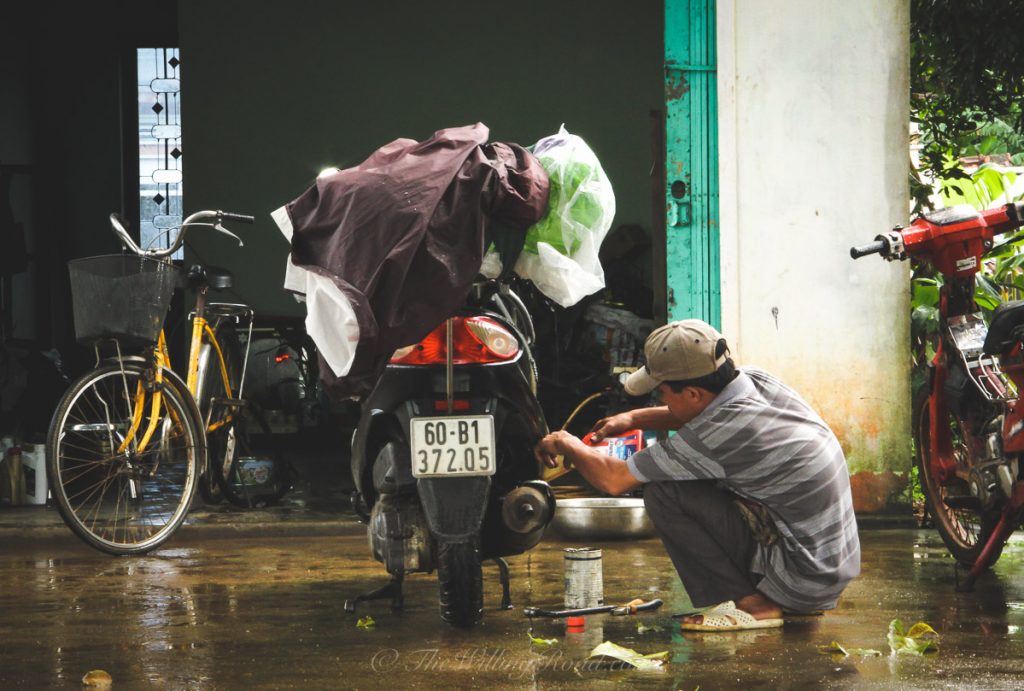 We continued our travels along the AH1, even though we had promised not to again but we were on our way to Hoi An for the full moon. Hoi An floats lanterns along the river every full moon. 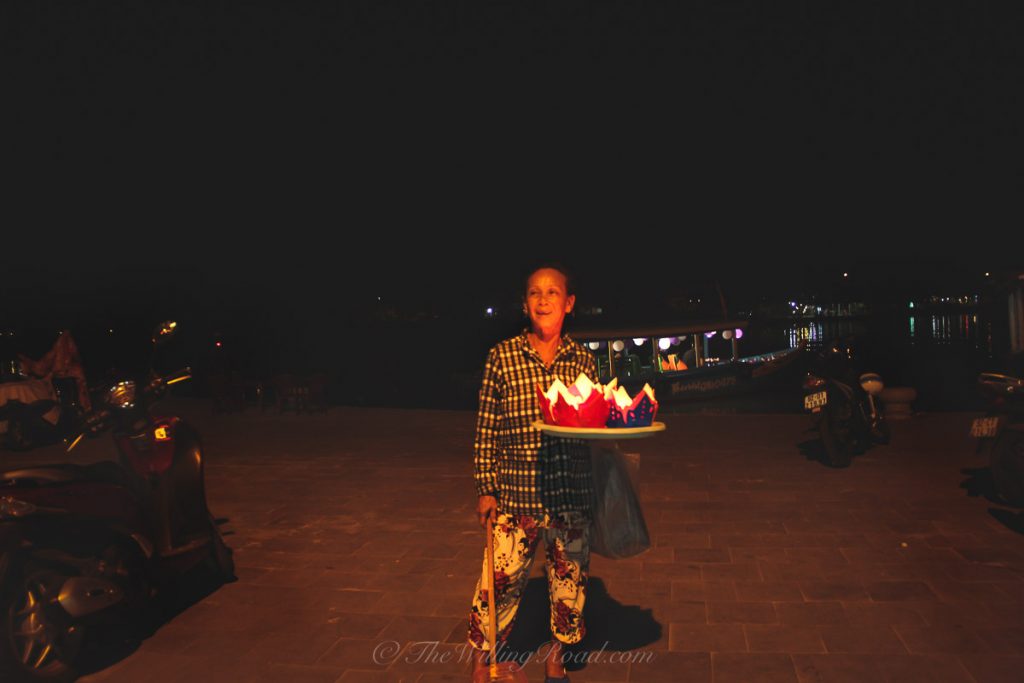 We didn’t want to miss it. The road from Quy Nhon to Hoi An along the AH1 was easier than we had anticipated though. There was construction of course but nothing too difficult that we hadn’t experienced before. We made the trip in about 7 hours.

Hoi An was a lovely city full of gorgeous architecture, small streets and romantic views of the river. But with all motorbike stories comes at least one breakdown. 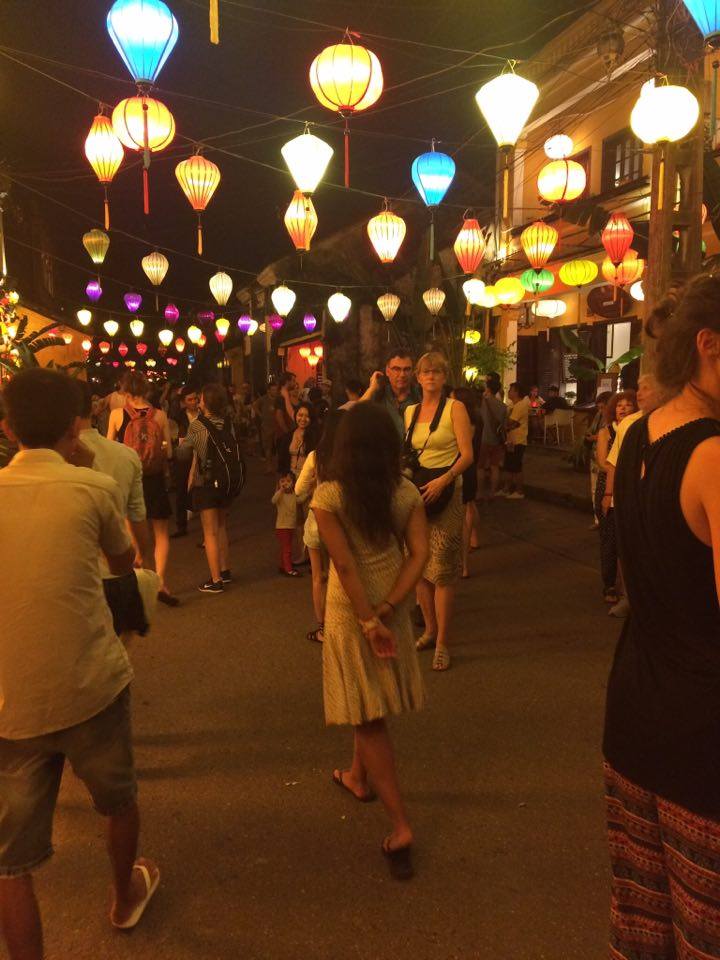 Break Down in Hoi An

Dianna and I decided to take my bike on a day trip out to My Son, a site of abandoned ruins. It was beautiful architecture of bricks and excellent photo opportunities. 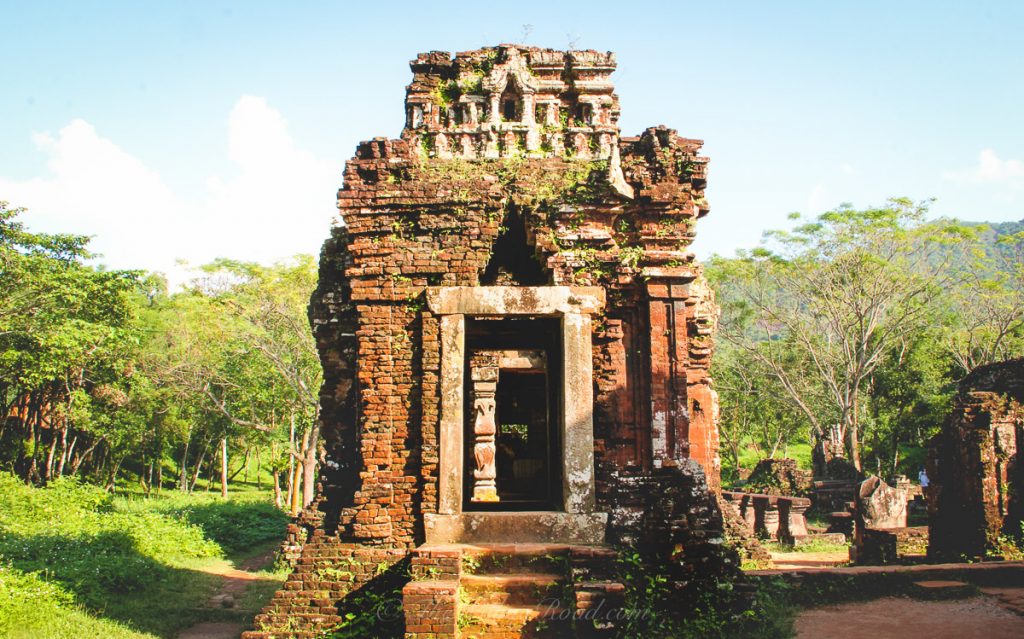 On our way back into Hoi An though, my bike began to make strange noises. Just don’t speed up, that way it won’t make that loud noise. Vietnamese people were laughing and pointing at us as we passed by. We should be fine, we’ll make it. Then my exhaust pipe was making popping noises, “Pop, pop, pop!” More Vietnamese people pointed at us, yelling in Vietnamese. I’m sure it’s ok. No worries over here. Please stop pointing at us. We were driving straight to the mechanic… but we didn’t make it in time. As we turned a corner, we accidentally hit a pothole, “Clunk, clang!” Um… so… yeah… what was that noise? I turned around to find my exhaust pipe lying in the middle of the road, my bike sounding like it was driving underwater. Not only was it my exhaust pipe but half of the pipe that attaches it to the bike was completely torn off. Vietnamese people were swerving around it, questioning who would be dumb enough to lose a whole exhaust pipe. I watched as everyone glanced at it, then looked up to see my foreign face standing beside it in shock, scared to touch a hot exhaust pipe (I burned myself once, I was not about to experience that shit again) which caused them to break out in laughter, Oh! It makes sense now! She’s not from here! I could imagine them saying. “What do we do? It’s hot! I’m not touching that thing!” It was rush hour and traffic kept flowing around me and my pipe. When the light turned red again I used my helmet to push it to the side of the road. I hope I don’t melt my helmet. I feel so dumb… Ugh, stop laughing at me. I kept pushing the pipe with my helmet. At this point I was dying. The sun was lowering in the sky and it was a gorgeous sunset, but I was standing in the middle of the road pushing a large exhaust pipe with nothing but my helmet across the street– in a dress I might add. I saw a taxi driver was crossing traffic, probably to inspect my problem. He was smiling. He walked straight up to my exhaust pipe and bent down. “Wait! Don’t touch it, it’s ho-” He tapped it, picked it up and placed it on my scooter. In Vietnamese he said “It’s not hot.” Dianna could tell he was making fun of us. This killed me even more: the pipe had no exhaust going through it because it wasn’t attached therefore it wasn’t hot. Across the street the line of taxi drivers were laughing at me and my helmet which I still held stupidly like a shield that could protect me against the non-existent heat of the pipe.

The repairs on my bike delayed us a few hours the next day so we decided to stop in Danang, a city that we weren’t initially interested in. 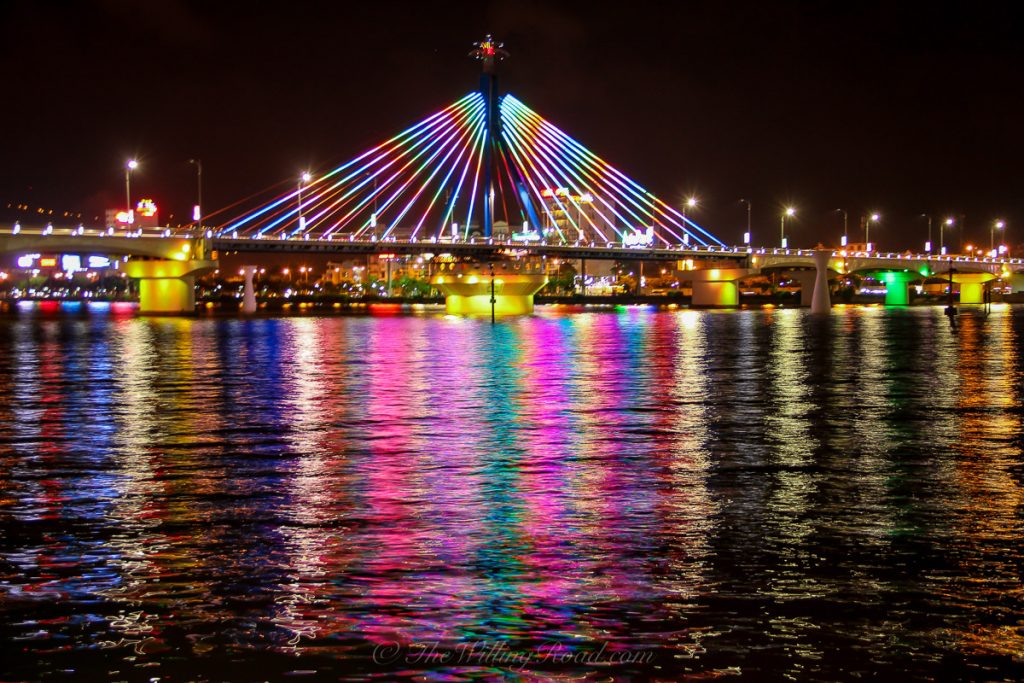 After spending 2 nights there though we realized that it’s actually a gorgeous, underrated city worthy of a visit.

We rested in Danang and continued our journey North, where we found the most beautiful scenery…