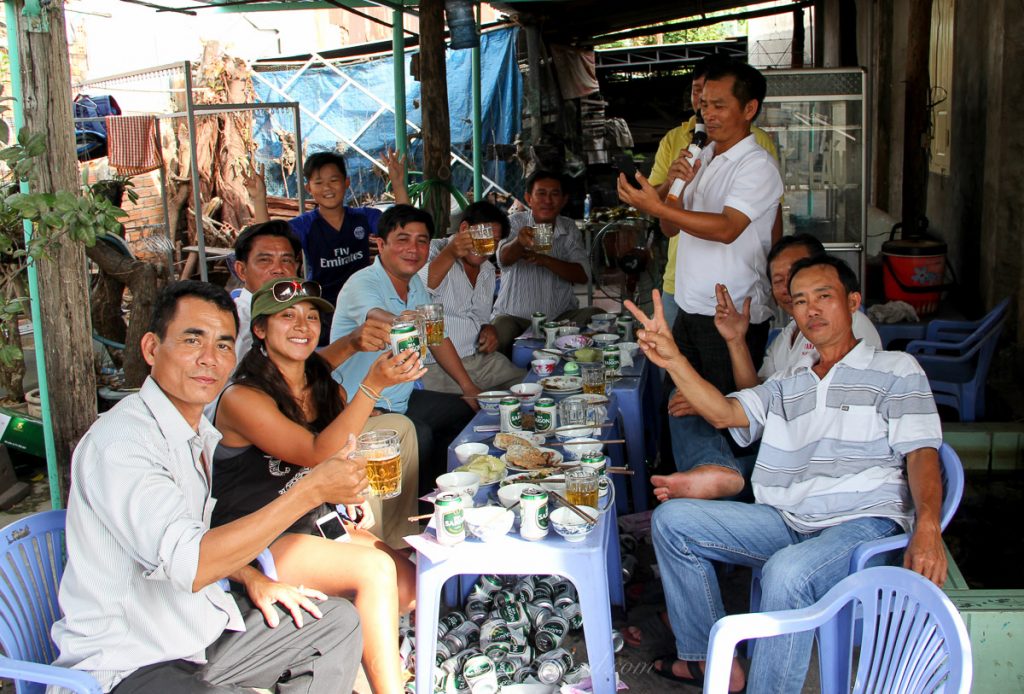 If you didn’t already know, I’m hitchhiking Vietnam with Tim, a friend I met on the road.

As it was our first time hitchhiking we weren’t sure what to expect. I know that Vietnamese people are friendly and always willing to help but Tim spent his time in Ho Chi Minh City hanging out around Bui Vien because that’s all he knew (something I don’t recommend) so he wasn’t so sure about the way Vietnamese people would react. The first move we made was to get out of the big city so we cheated and took an overpriced bus to Mui Ne where we met up with some familiar faces who were working and living there.

The morning that we left Mui Ne we walked up to the main road that led to the highway. After about 15 minutes of walking we were picked up by a family who had hired a shuttle van to take them to the beach. We stuffed ourselves into their van and everyone was excited to practice their English, “Where you go?” the 5 or 6 year old behind us asked. Dalat. They talked excitedly amongst each other and one lady popped her head up from the back of the van. “Excuse me? If you wan go Dalat you haf to turn aroun.” Uuuuhhhhhh. We don’t want to be rude or anything, but can we get out? But we didn’t say that because these people were kind enough to stuff us into their family vacation time. “Excuse me?” One man sitting up front turned around, “We can take you to bus station. From bus station you go Dalat.” We didn’t want to take a bus but we took whatever we could get. They dropped us off in front of the red sand dunes that people usually pay $12 to visit from Mui Ne and we paid nothing. Instead of going forward we decided to go backward. A motorbike taxi told us to wait for the bus which would take us back to Phan Thiet, the city above Mui Ne. Accepting defeat we dished out the 15,000 VND each to take the bus back to our starting point.

By the time we got to Phan Thiet it was almost noon and we were hungry. We ate, bought a black marker and prepared to hitchhike one more time. With our new marker we wrote on a piece of cardboard “Dalat.” The highway that we needed to get to was walking distance so we took the most direct route which was a long alleyway. We bought another bottle of water from an old man running a hidden shop amongst all the houses. I watched the old man’s face as Tim spoke to him in English and waited for the old man to become frustrated with us. He didn’t say much but when we made our purchase he stuttered and spit out, “Thank you!” in English and smiled widely at his accomplishment.

Yo, We Are The Worst Hitchhikers. Ever.

As we were walking down the long alleyway a man sitting in his house yelled out to us, “Yo!” the Vietnamese way of cheering, and held up his beer to us. We cheered him back with our waters from afar. Locals blasting their music in celebration of the New Year echoed off the walls along the alleyway. Another group of men sitting on their front porch yelled out to us, “Yo!” and held out a beer for us. We decided to jump on the opportunity. Yo…lo. The group of men had their children bring out two more glasses, threw some ice inside and handed us Tiger beer. We were surrounded. The children woke from their naps– the oldest being an English speaking 15 year old– to come and stare at us. The grandma and the wives came out of the house and sat around the porch to smile and gaze at the strange foreigners who just entered their home. We drank a few of beers, talked about Vietnam and work that everyone did. They were a mix of carpenters, engineers, and controllers in the same business. The guy who spoke English worked at a country club. We told them that we were hitchhiking to Dalat. They said that no one would take us because everyone is on vacation. We’ll take our chances. They gave us two dragon fruit and two beers for the road and apologized that they couldn’t give us more. We thanked them and continued on our way, our bodies relaxed from the beer. 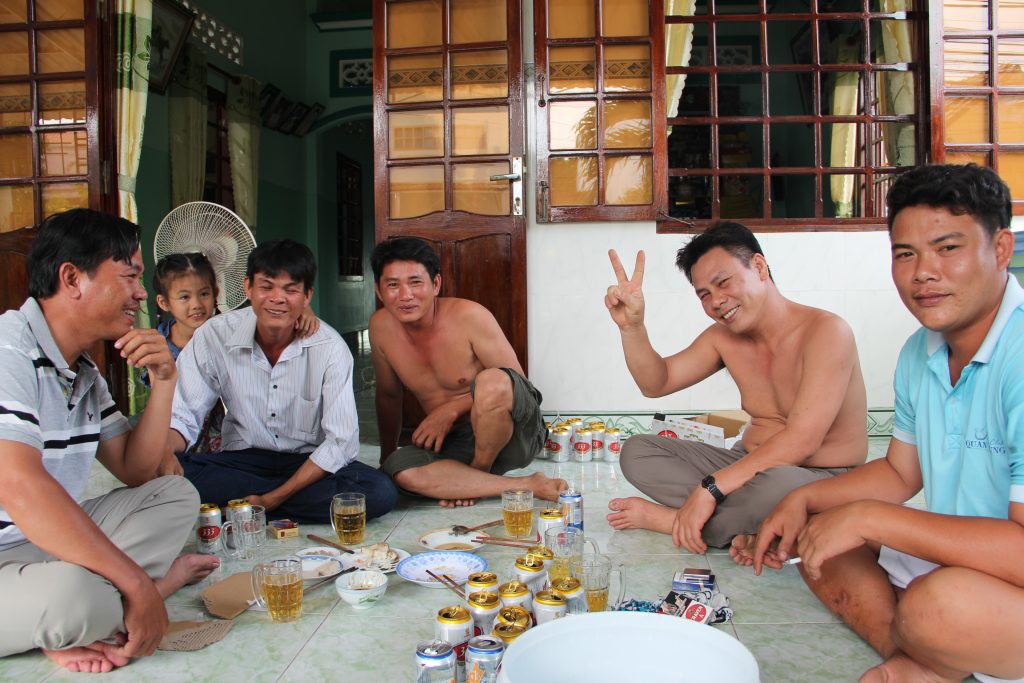 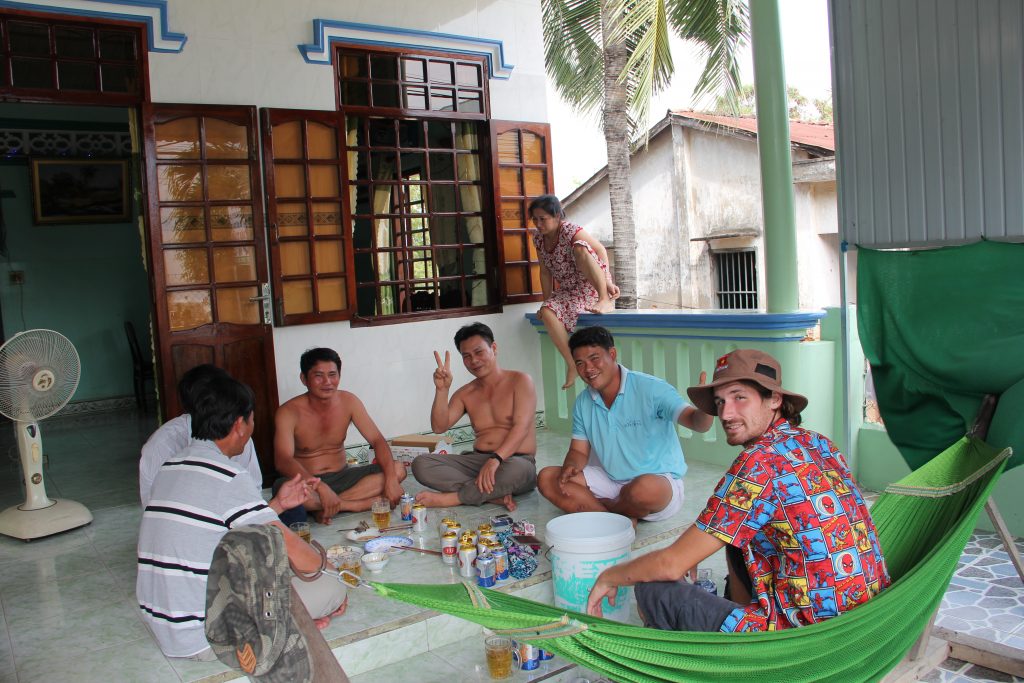 A meeting of men 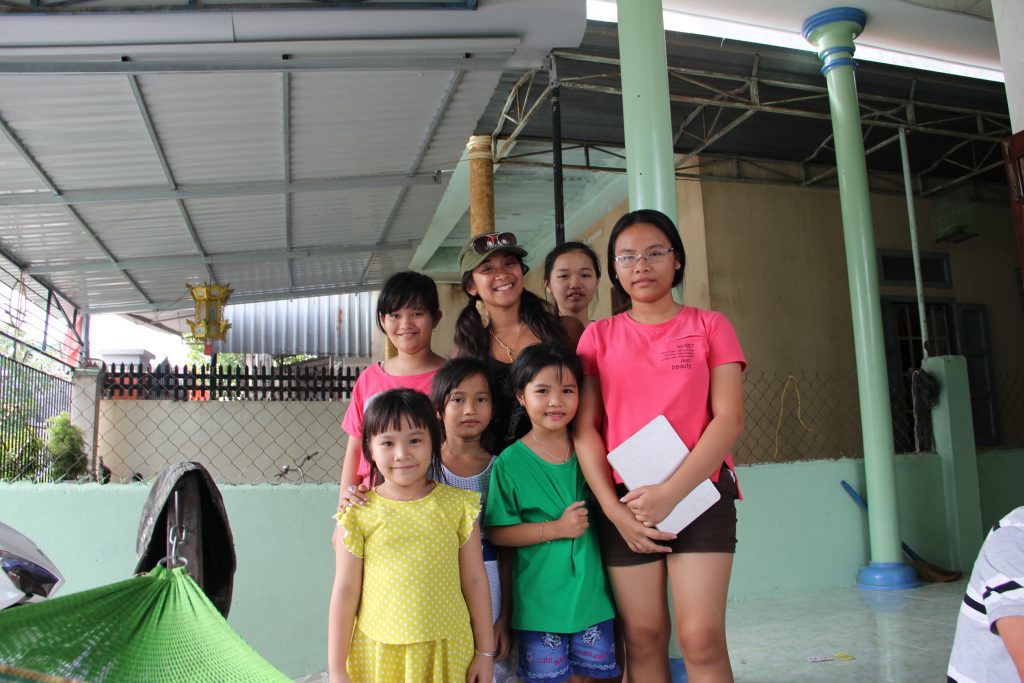 The girls wouldn’t stop staring and were so excited to meet us.

Upon reaching the highway, the sound of karaoke filled the air. Passing a house we found the source of the noise. Men sat at a long table full of beer cans and food singing karaoke from their iPhones, the empty beer cans littering the floor beneath the table. They yelled for us to join them. We joined them. These men didn’t speak any English, but they grabbed some bowls and filled them with food and gave us chopsticks and a cold Bia Saigon each. And we Yo’d and we laughed and we danced and we sang. They asked us where we are from. When we told them they said “Ahhhh, Donald Trump” and laughed. They took interest in Tim’s tattoos, one man showing his poorly done rose on his shoulder, making a disgusted face to indicate that he hates it. Then it was 3 pm and we were feeling the effects of the beer and we realized that we are the worst hitchhikers ever. It was like being stuck in the land of the lotus eaters. We had to get out. As we were leaving they tried to convince us to stay in their great city but when they couldn’t convince us they gave us envelopes and indicated that we can’t open them there so we stuffed them in our pockets, thanked them for everything and escaped as fast as we could, just a little more tipsy than we had planned to be. 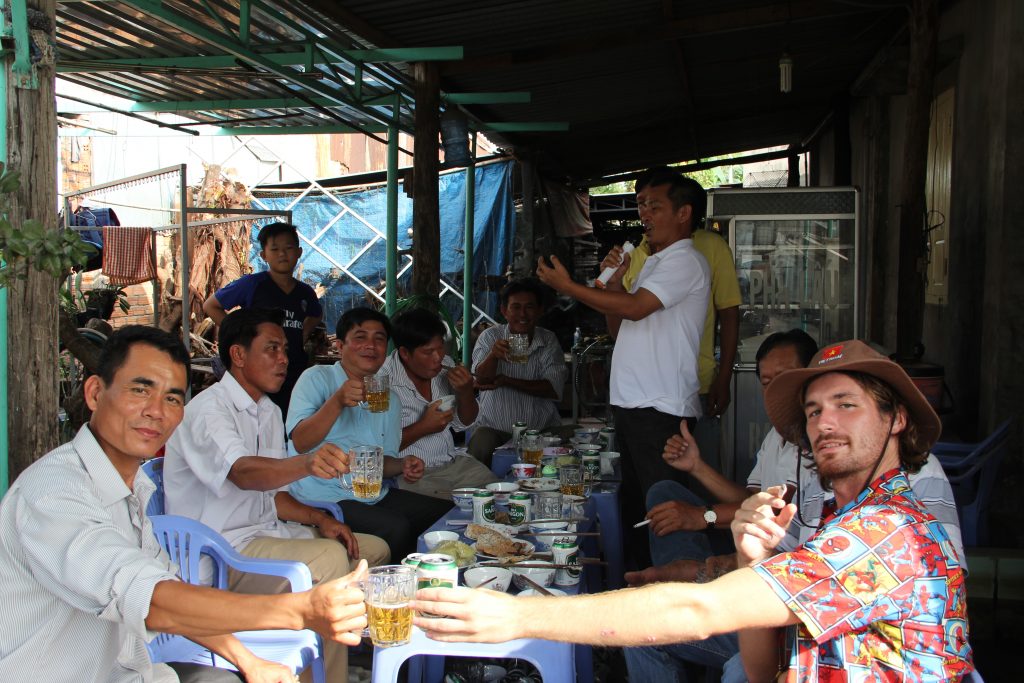 I pulled out our fancy sign and held it facing the traffic as I walked in the same direction. Within 5 minutes of walking a man pulled up on the side of the road. The stench of beer, cigarettes, and sweat undoubtedly filled the car as we hopped in but if the man could smell it, he didn’t let on. His name was Huong Ho. He didn’t speak English. Through gestures and maps he explained that he was going to a different city but he could take us to the crossroads and leave us there. We thanked him. He dug through his glove box which was filled with CDs and after much searching he popped one into the CD player. Early 90s house music in English began to play softly in the background. The sound of someone rustling through some plastic bags came from the back of the car. It was a live baby shark but Huong Ho only knew how to say “fish.” When we got to our place of departure he asked “Ca phe?” which means coffee. Since we were tired from the beer we accepted his offer. He took us into a large coffee spot where there were many tables, but not many people. He ordered three coffees and talked to some other Vietnamese men at the table. After 15 minutes of sitting with the man, smiling politely and drinking our iced coffee he explained that no one will be going to Dalat at this time and suggested that we crash at his house. We accepted this offer as well.

He put us back in his car and took a random dirt road near the coffeeshop where we drove past fields of dragon fruit, which he owned. We ended up at his house where his wife and three children were already preparing dinner. His daughter, Nee, spoke English very well. She was 27 and back home for the holiday. Her younger brothers, 25 and 11 years old, did not speak English as well but they smiled and drank and ate with us. The 11 year old was intrigued by us, loved drawing with us, pretended to drink with his orange soda, and wasn’t afraid of hugs. Our driver spent some time making several phone calls and I knew that he was cancelling whatever plans he had at the city he was supposed to be in that night.

We ate the baby shark that was alive only a couple of hours ago, wrapped it in rice paper with lettuce, mint, rice noodles and dipped it in a sweet and spicy sauce. We ate snails. We ate soup. We drank more beer. Huong Ho invited more of his friends over and they drank until they were red in the face.  At the end of the night we hugged everyone good night and explained that it was the American way– to hug. The brothers and Huong Ho laughed and thought it was strange but accepted them. The wife ran away laughing when we tried. The daughter acted like she didn’t like it but we knew she did. 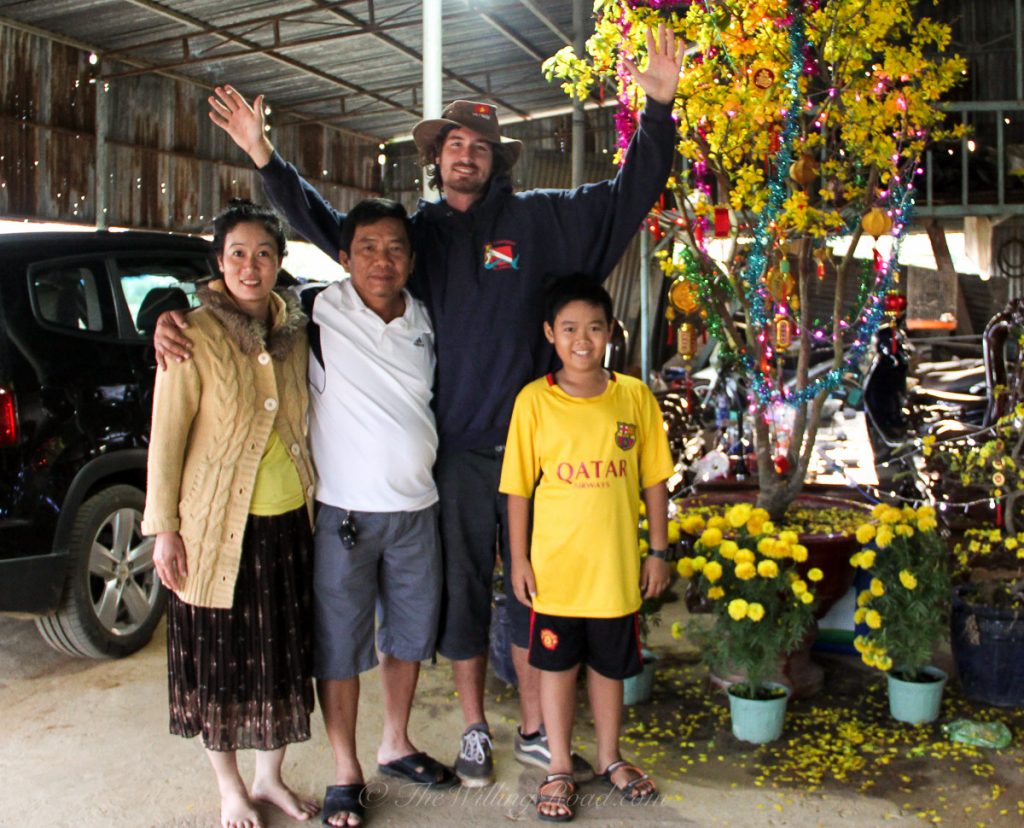 Huong Ho, his youngest son, and his wife

It was not the best of sleeps but we were grateful for meeting Huong and his family. It was an experience neither of us would forget.