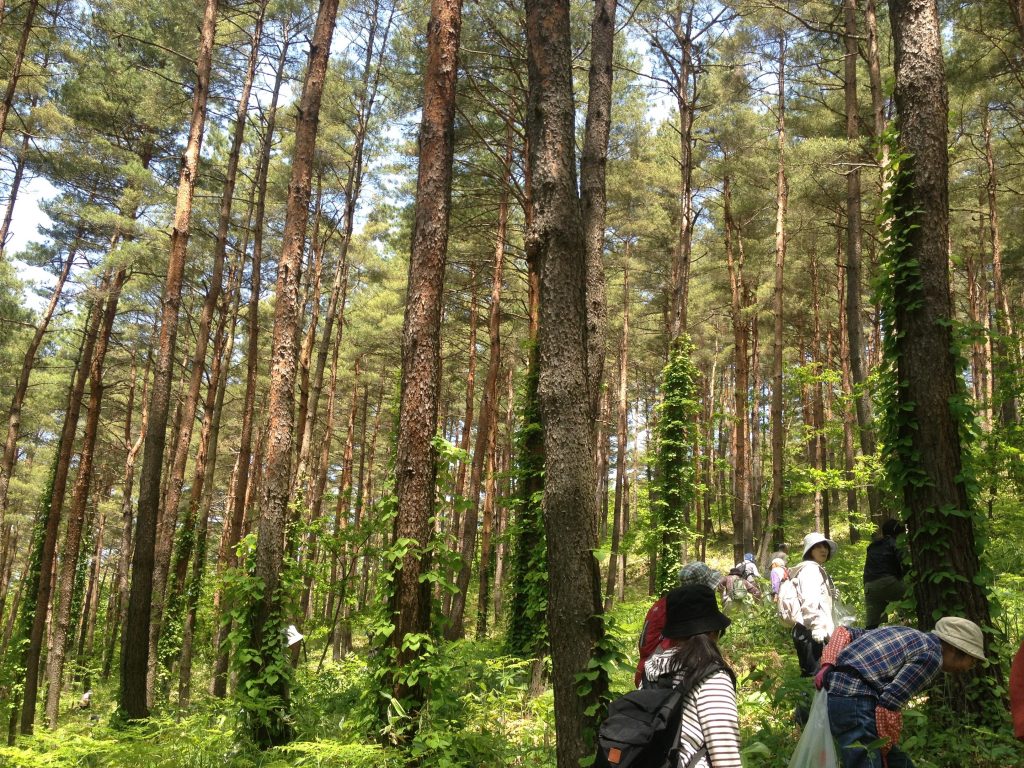 Ok, before you knock this activity and assume this is some boring senior citizen activity, let me set some things straight: It totally is a senior citizen activity. In fact, I was the youngest one there. And yes, I thought the same thing, “Everyone is going to the beach, why am I stuck doing some vegetable picking?” It all began because my friend Jada and I used to teach English to a woman named Kyoko that organizes tours with her company IGR, an Iwate railway company. When she cancelled her English classes we exchanged information and promised her that we would take a tour with her one day. Well that day had come and while we were hesitant (beeeeaaachhh), we also couldn’t decline especially since the ticket she offered included the tour, the train ride, the bus ride, all you can eat buffet (someone knows their way to my heart) and onsen for half the normal price. 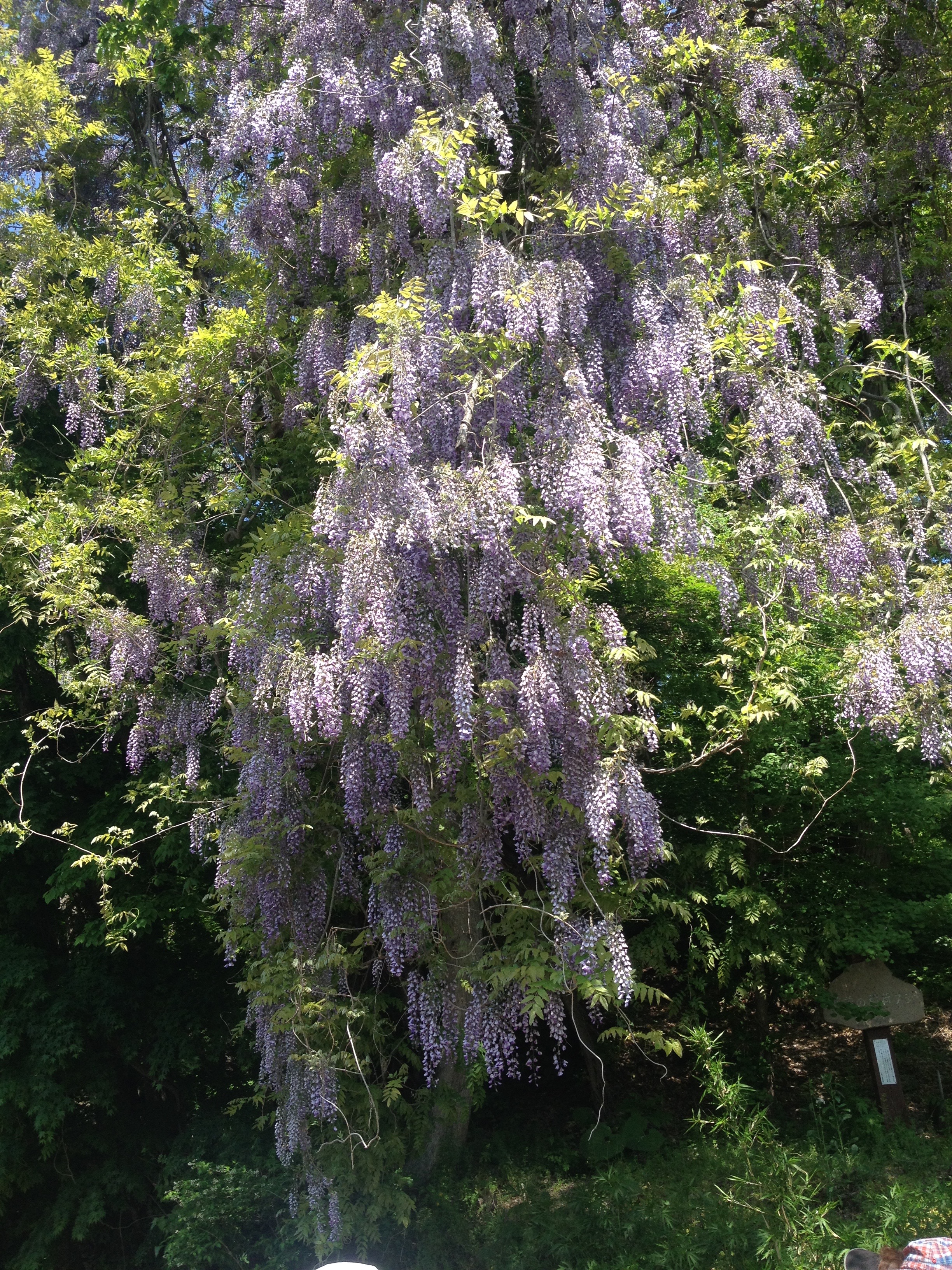 Wisteria seen along the way

I figured I’d been to the beach plenty of times and that there are plenty of more times to go in the future, so I can sacrifice one day for hanging out with the elderly and pick a few vegetables. I didn’t even bring my camera because I thought, “What kind of photos could I possibly be taking?” So I only brought my shitty camera phone.

We met our previous student at the station at 7:20 in the morning to take the IGR train to Ninohe where we then hopped on a bus that took us deep into the mountains. 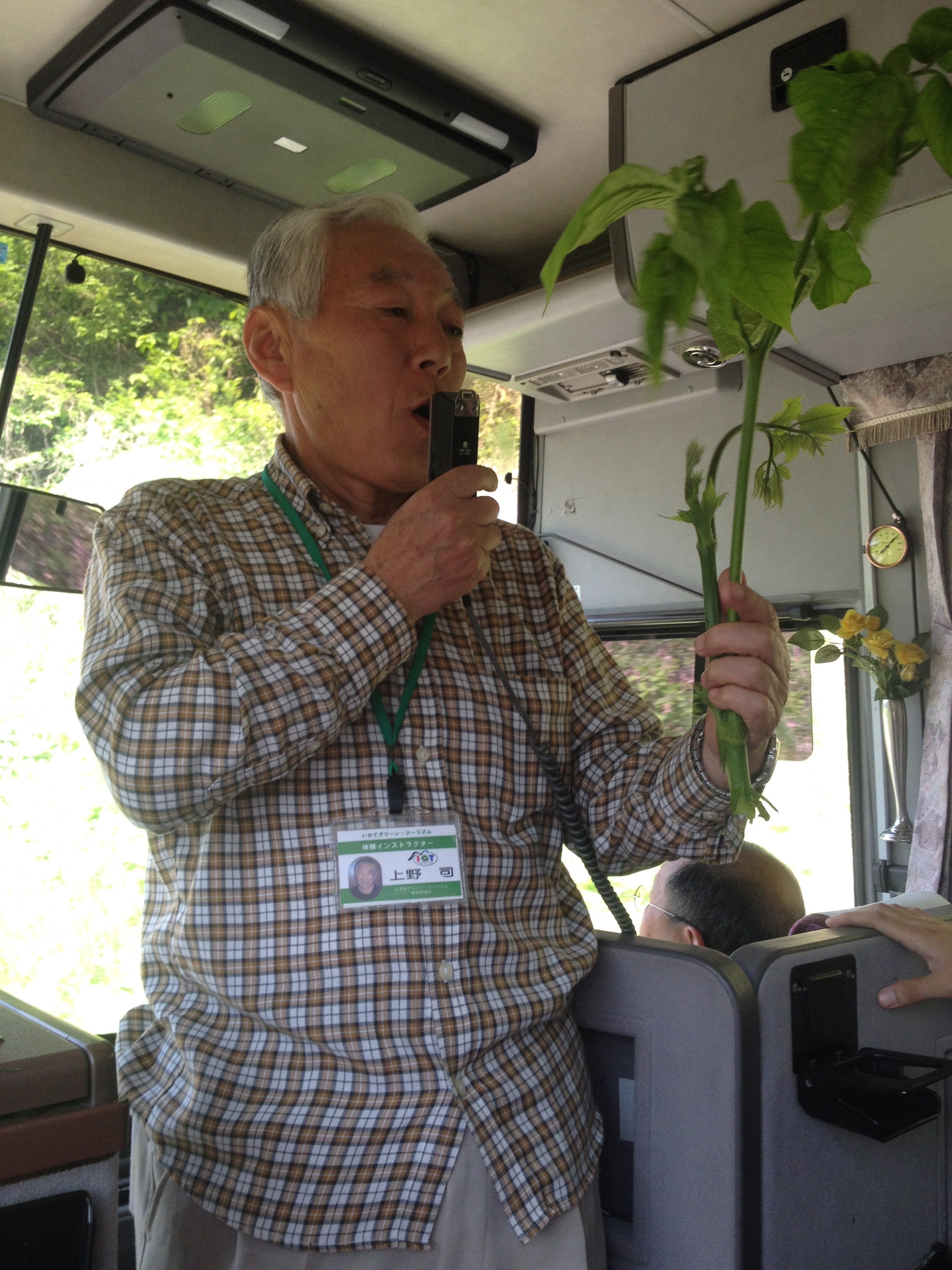 There, we met up with a group of men who were trained in vegetable picking and would take us on our hike. I knew I would be hiking, but I was thinking like one of my normal I’m-going-to-hike-early-in-the-morning-for-a-few-hours-along-a-trail-that’s-not-far-from-the-city-because-I-want-to-pretend-I’m-fit hike. So I wore a tank top with a little elbow length sporty sweater, running shoes, and knee length yoga pants. I was one of those cute girls that wears workout clothes to pretend like they just came from the gym when in actuality I was watching Netflix with my cat (Actual scenario, Not ashamed). I wasn’t completely wrong about my outfit, but the senior citizens and Kyoko worried that I would be scratched by all the plants and provided me with some long boots to cover up the rest of my skin. They also provided us with some gloves and a bag. We were not half as prepared as these elders that we were touring with. 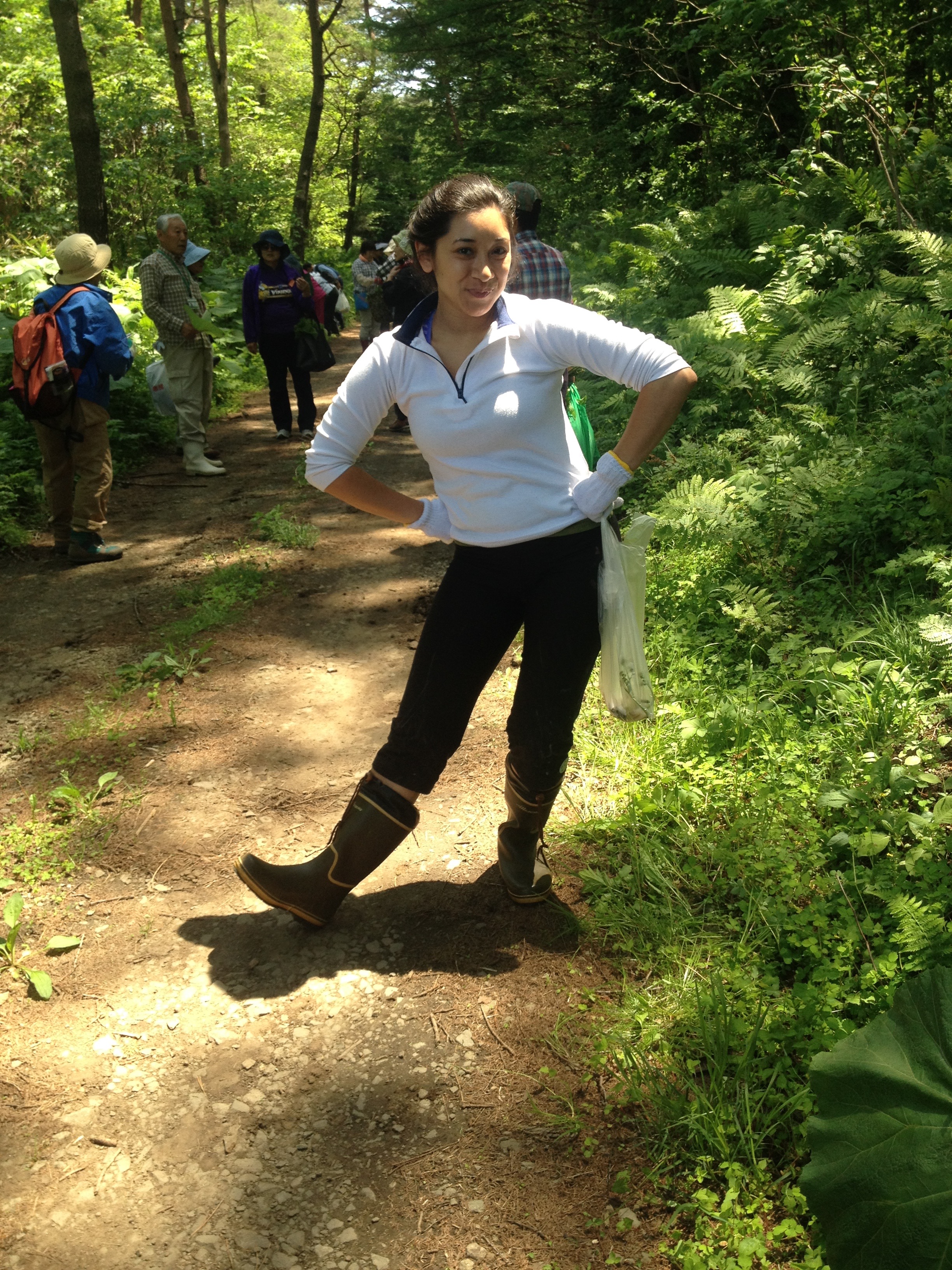 My amazing outfit for the day

After we picked up our manly guides, the bus took us deeper into the mountains where we were dropped off and set out to gather our vegetables. Up the mountain we went, grandma setting out with the speed of a cheetah on the hunt. It was like releasing a swarm of locusts on the forest. Somehow I ended up in the back of the pack following a trail of worthless vegetables that had been picked, cut and discarded. Broken leaves were everywhere. They were beasts. 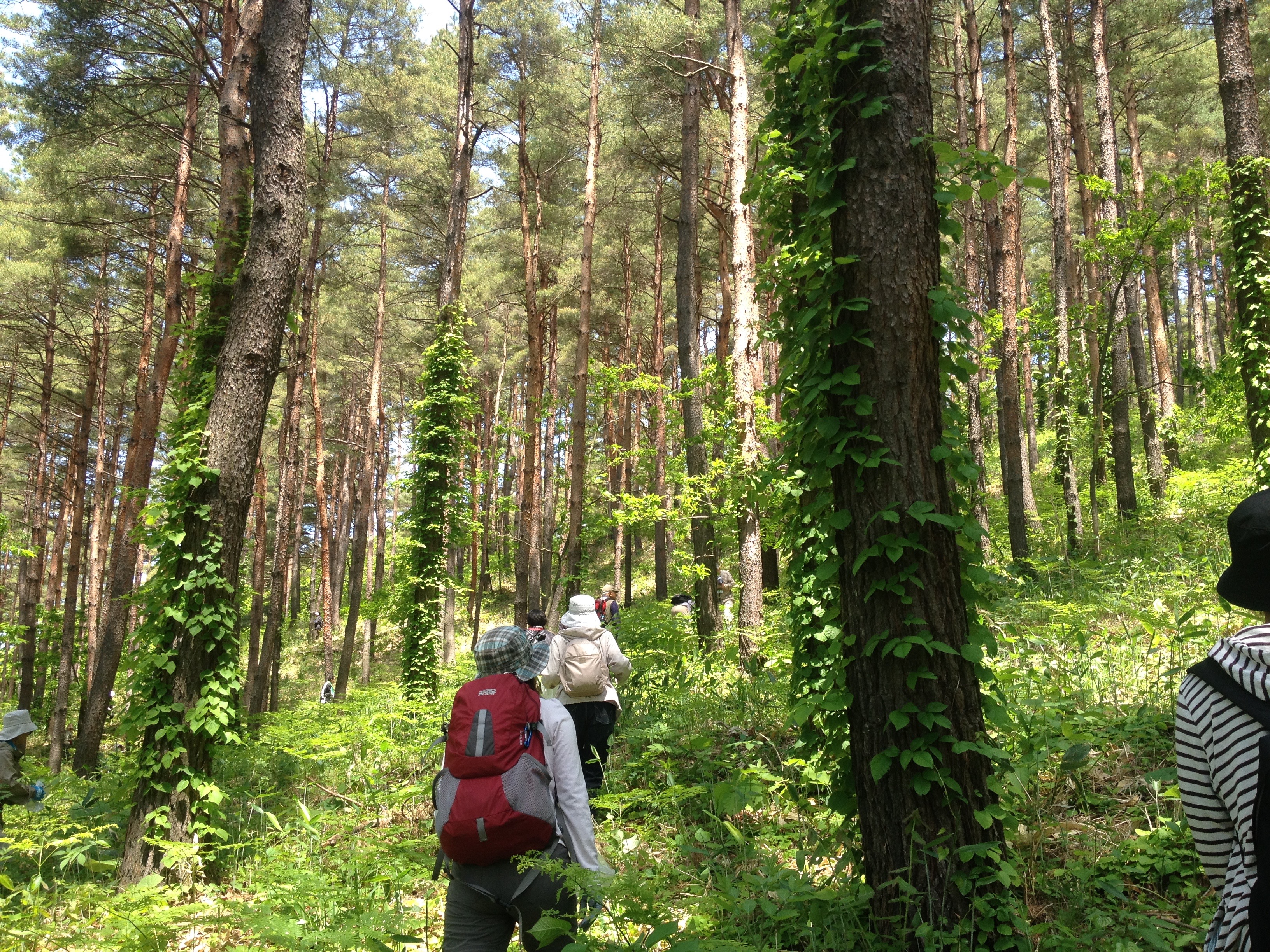 Going up the mountain

Soon, we were no longer on a trail, but climbing up the mountain, poking through the brush, searching for the different plants. Once Jada and I knew what to look for and what plants were considered good we felt like pure professionals, man. Suddenly we were all into it, our eyes scanning the forest floor for the perfect plants, while also keeping an eye out for spiders (we saw several, and screamed because f that shit, man).

I finally realized why grandma and grandpa were so into this activity. It was like Easter egg hunting all over again. Find a plant, judge it’s size, and pluck it from the ground. From there, examine the plant to decide if it’s worth cooking up. I wasn’t half as good as my elders, but it was a nice way to bond with them. It was like everyone there was my grandma or grandpa, teaching me what to look for, whether the plant is worth keeping, and then how to cook the plant. 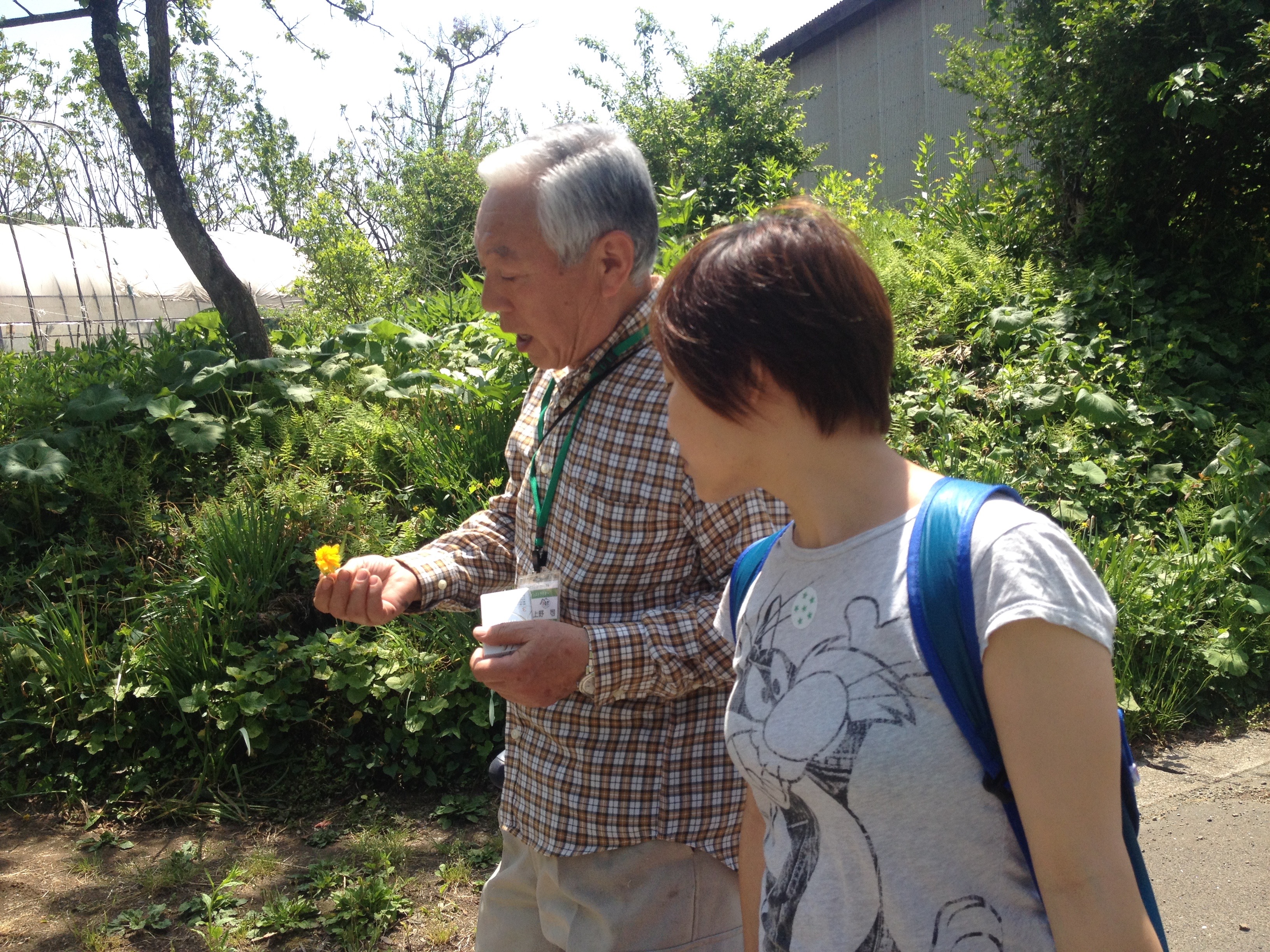 Our lessons continue on

I think the elders started feeling bad for our small stash of veggies because they constantly gave us some of their picks, or you know, just being grandma-like. One guy gave us an entire bag, which made it easier for us to just chill for a while. They had already picked through all the good plants anyway. 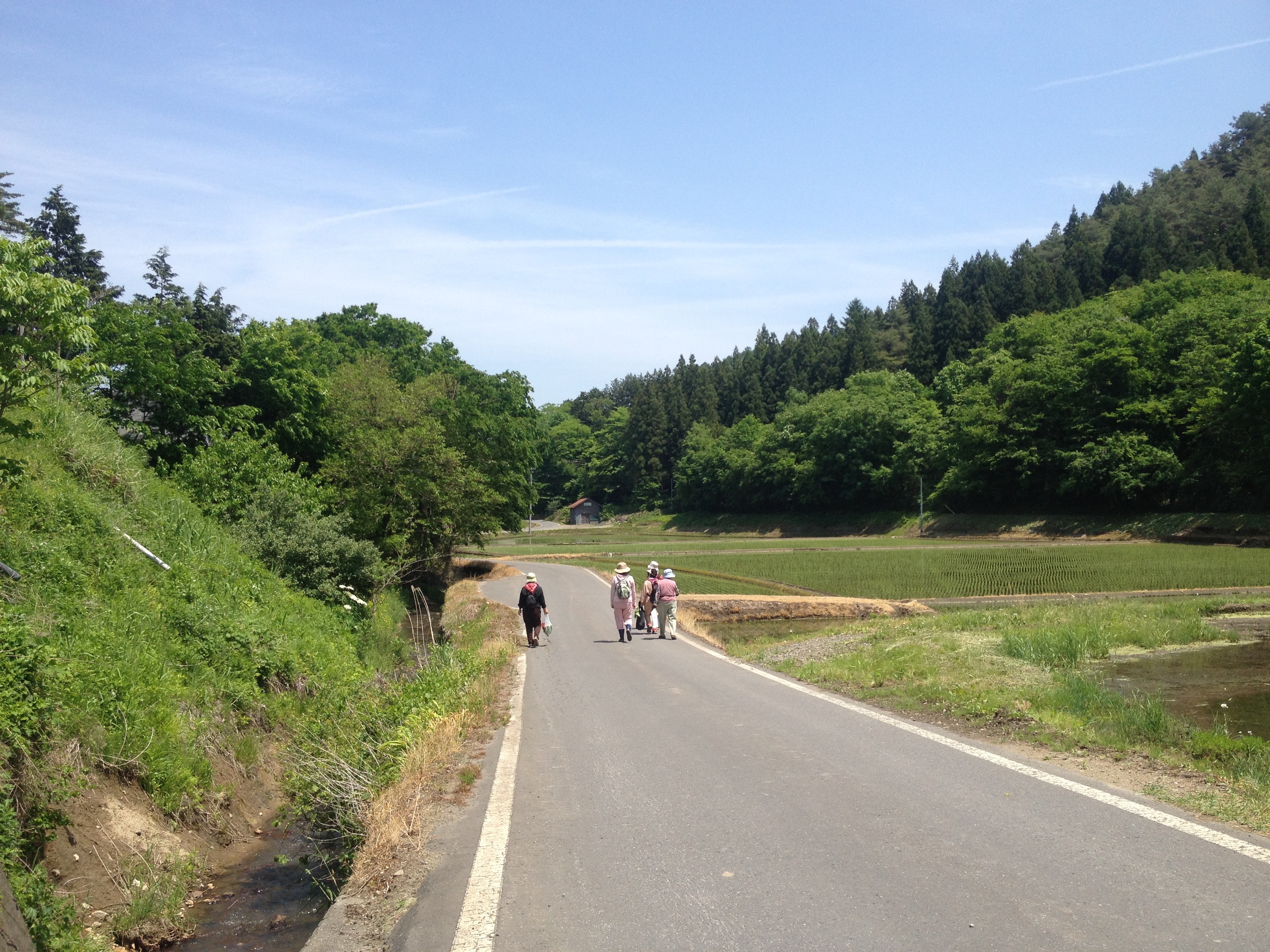 Finally out of the woods and walking along rice fields

After we had brushed through a good amount of the side of the mountain, we continued to hike along a pathway that led through the woods for about half ‘n’ hour before ending up back at one of the guides’ village. From there, the people of the village prepared a buffet which contained the veggies that they had picked in the area. Since we were professionals by then, we recognized a lot of the vegetables that we had just been in the forest searching for. 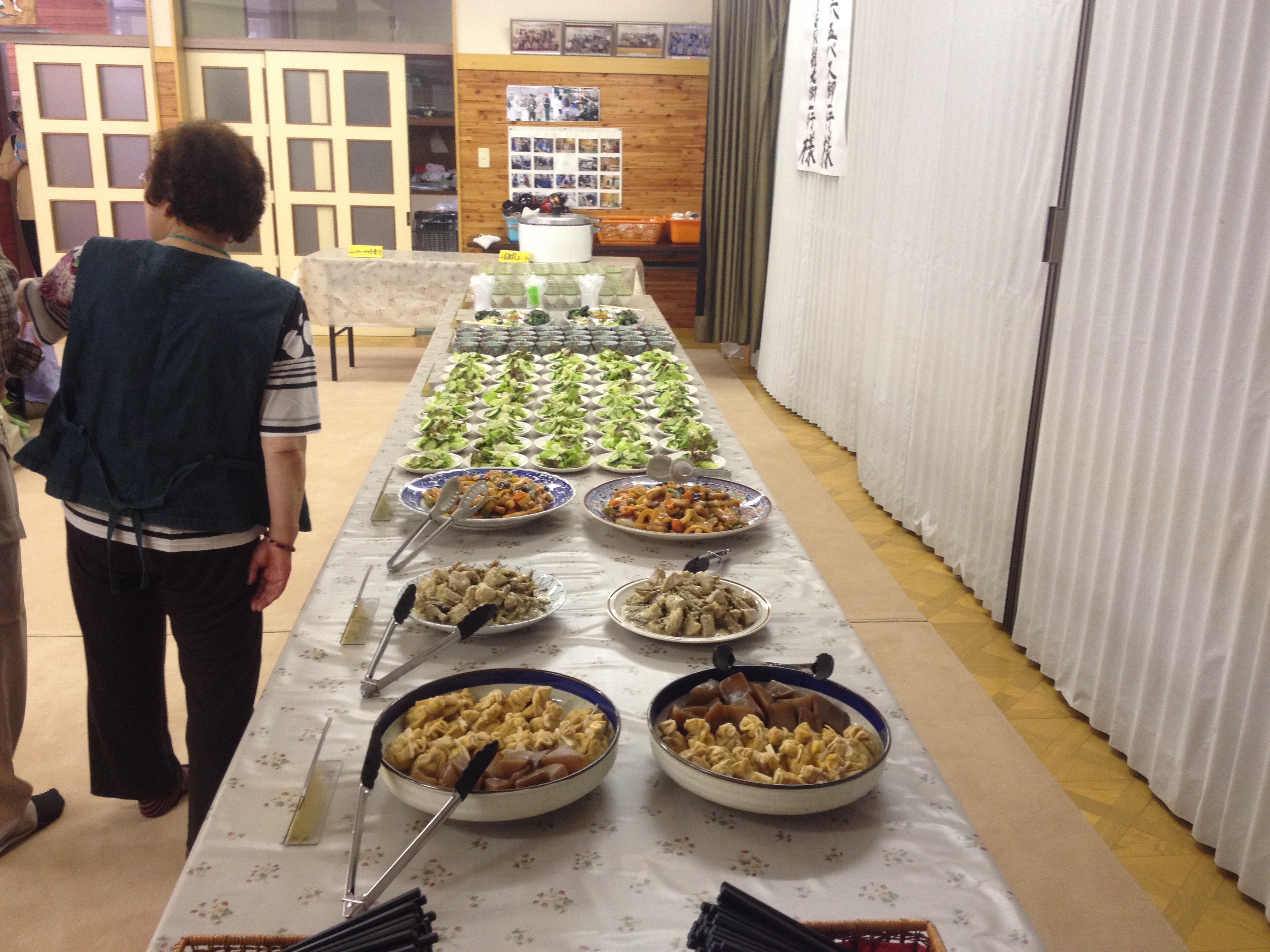 Such an organized buffet

Even though it had seemed like something we wouldn’t enjoy, it ended up being a very enjoyable experience. I had eaten Japanese cuisine before and whenever I questioned what a certain unfamiliar vegetable was, every Japanese person simply stated “mountain veggies” which meant nothing to me until now. Hanging out on the sides of the mountains with these elderly people of Japan I was getting a real experience of Japanese life.  They had so much knowledge to lend to us and treated as if we were their own. Now I have bags of mountain vegetables that I can (have a friend) cook! 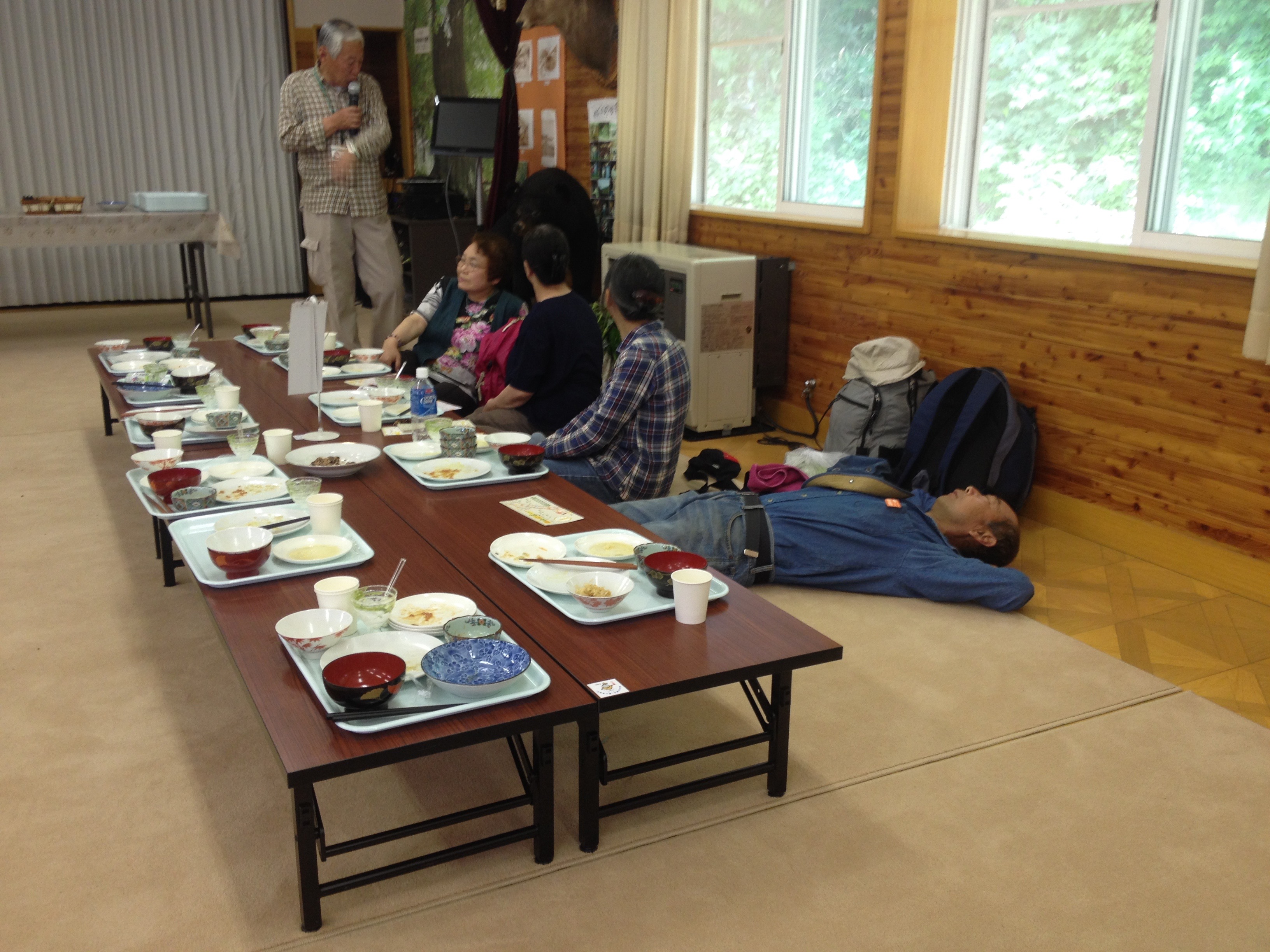