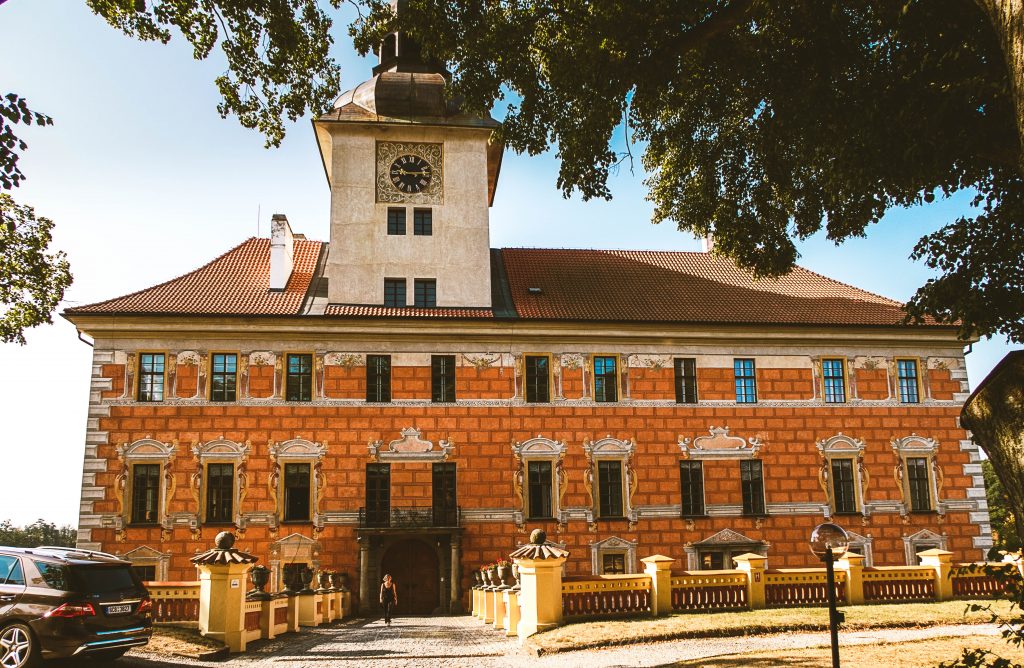 Princesses and castles… and then there’s me.

Whenever people think of castles one of the things that come to mind is fairytale princesses who are waited on hand and foot, who are courted every day, wear beautiful dresses, look their skinniest and have their hair brushed one hundred times a day by someone else.

Women all over dream of being a fairytale princess, because who wouldn’t want to be courted just for being pretty and having days full of mindless work, like sitting up straight and having someone spoon-feed you?

And then there’s me, who, when someone compliments my hair, blushes because actually, I haven’t brushed my hair today or washed it in 4 days, but my split ends thank you. Or who really wears dresses because I can’t be bothered with figuring out how to match my pants with my shirt (choose one item and you’re good to go!)

[siteorigin_widget class=”SiteOrigin_Widget_Image_Widget”][/siteorigin_widget]
So, I must say, visiting castles and chateaus wasn’t exactly high on my to-do list in the Czech Republic. I wanted more adventures like rappelling, and wakeboarding, and riding e-bikes, even mountain biking! Couldn’t we at least try a local beer while we walked through the castle?

History was never my strong point, but I actually like history, just give it to me in a much more interesting way. Turn it into an attention-grabbing book, a TV drama, a theater play, or heck, a song, anything but having to listen to someone drone on and on about dates and names of people who are only famous because of how much money they had to own this castle.

But I went to a castle anyway. Several castles actually, but there were two that really stood out to me. 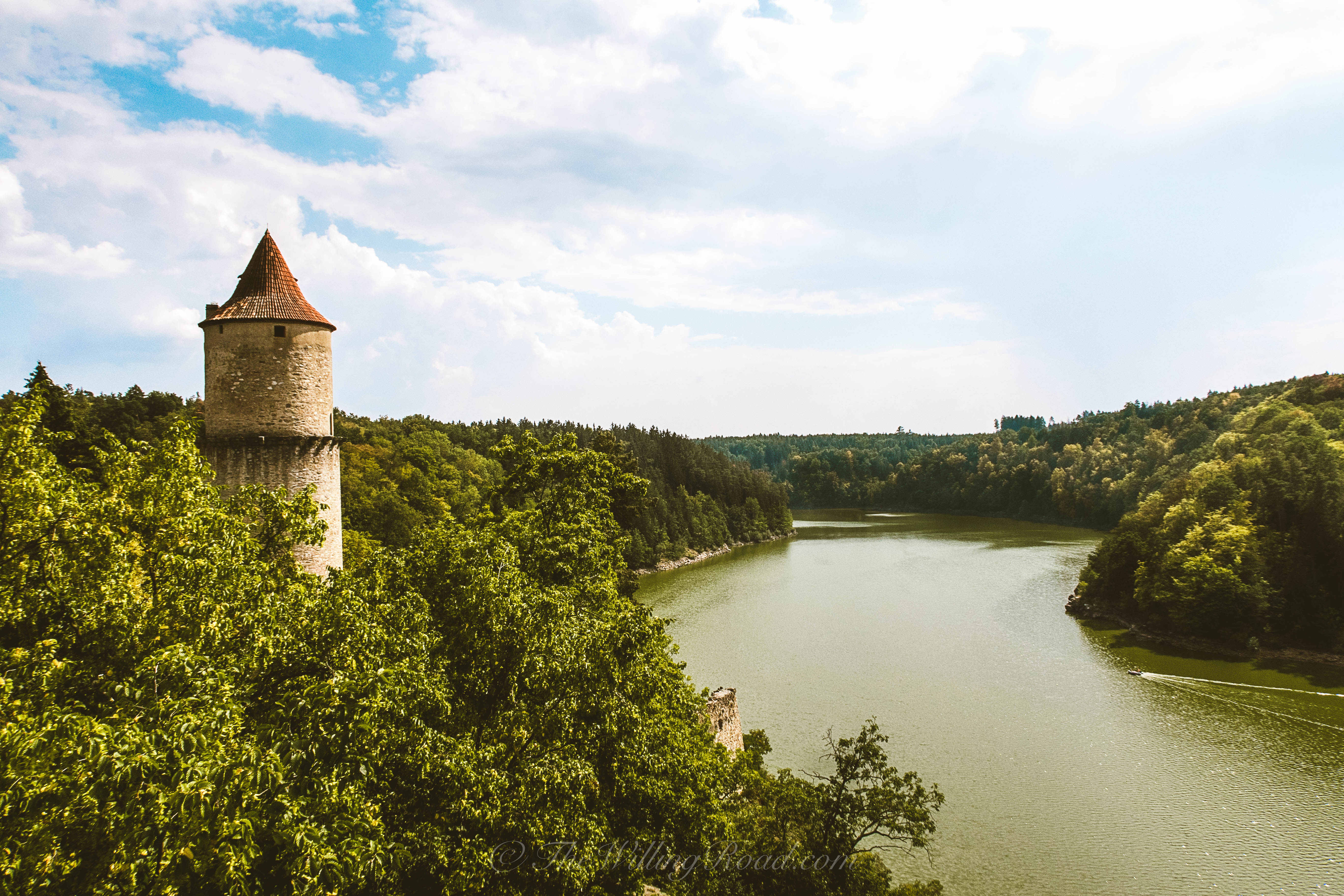 View from the Castle Zvikov

Castle Zvikov started off with a meal. Not only that, but it were as if the people of Pivovarsky Dvur Kvikov knew exactly what a good visit to a castle needed, which was beer. The staff brought out several different beers for tasting. Each the size of a normal glass. These weren’t just tasters, they were full glasses. Sips are for wussies. Once we finished our meals, we walked toward the castle, but it wasn’t the castle which caught our attention first, it was what surrounded it.

The castle, possibly built in 1234, sits on the edge of a cliff, above the Otava and Vltava river. Some boats sail pass, but other than that it’s a completely quiet and calm confluence. The castle itself deteriorated on different sides due to the lack of care. There are entire roofs and walls missing on one side, and some refurbishing done on the other for visitors to be able to admire the castle.

We were not given a tour, which made the experience much more pleasurable because I was able to imagine why certain wood beams were missing, what could have happened in this glorious castle that sits on the edge of a river.

Well, apparently, the castle was used as protection for the Czech crown jewels, but I didn’t find that out until after my wandering of the castle.

Do you remember that scene from Bridesmaids when the main character is driving up to the pre-wedding party and she’s given that exquisitely refreshing lemonade? And the driveway is so long, she can’t believe it, she almost feels out of place? That’s what it was like to walk up to the entrance of the Bechyne Castle. Trees and a large patch of grass surrounded the pathway leading up to the castle, but what made this castle special was not that a butler came out to greet us, or a suited up professional tour guide, but rather, a humble, welcoming woman. Her name was Nicole and she is the daughter of the man who currently owns the castle. And several birds apparently.

“Ah, yes, those are my dad’s birds,” she said, with a tone that indicated that his bird addiction was a nuisance rather than admired. Good ol’ dad.

We were led through each room of the castle, except for the private quarters because Nicole and her family actually lived in this castle. She, her husband and her kids, lived on one side while her sister and her family lived on the other side. Together, they worked on restoring the castle and the items that belonged to it.

For Nicole, giving a tour of the castle wasn’t just for the money, but from the way she spoke about it, wondered out loud about the missing pieces of a painting with us, and introduced us to the small details of the interior, she really wanted the visitors to love the castle as much as she does.

Even though I’m not one for castles, these two castles struck a chord for me. The passion and wonder surrounding both castles is inspirational and made me want to find more castles like them. I still wouldn’t be considered a princess material though.

At the end of the tour, after seeing the delicate details put into the construction of the castle, and the mysterious paintings, and large empty rooms, she took us outside and showed us her favorite view, where you can look down the side of the castle, upon the village below that sits along the river. 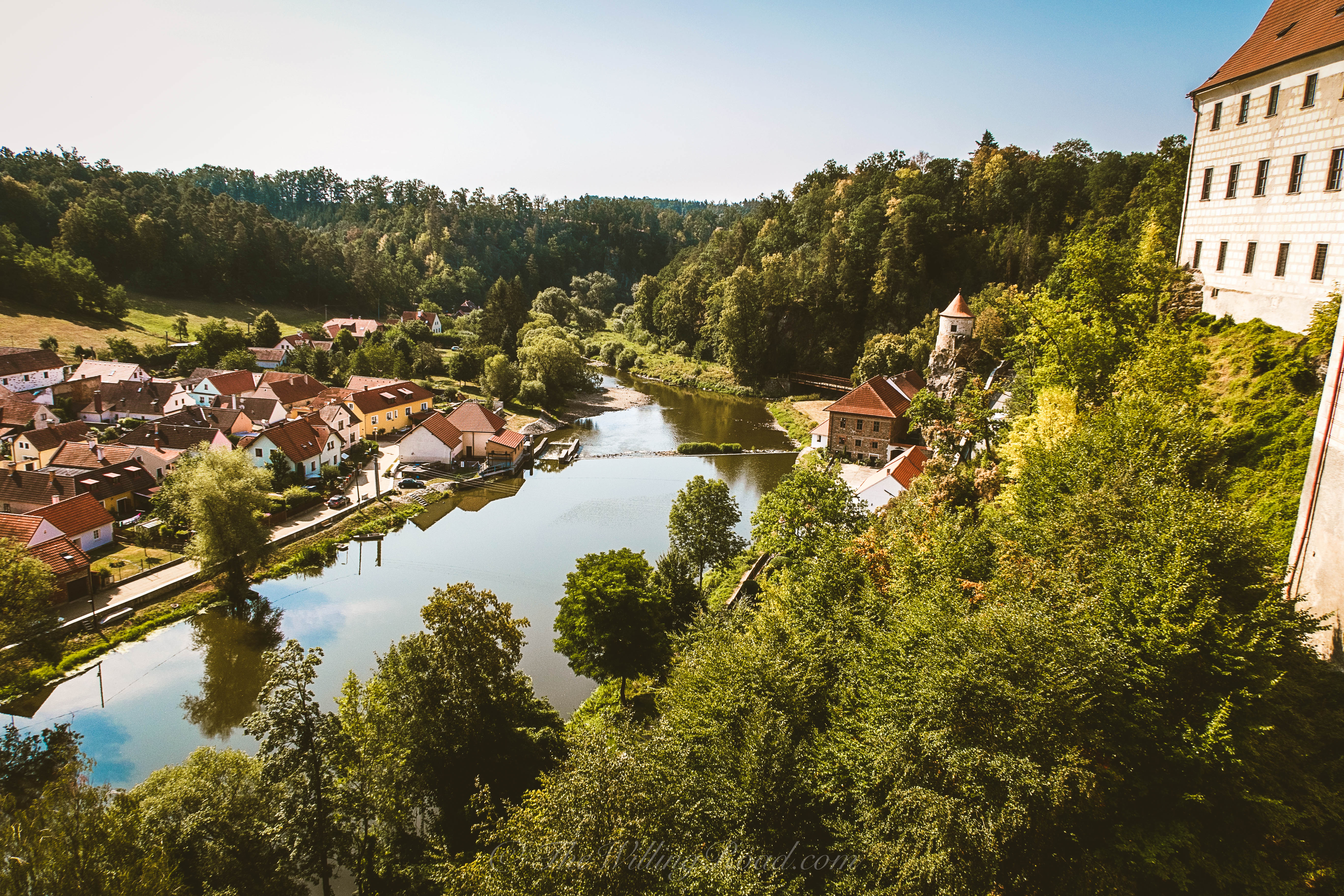