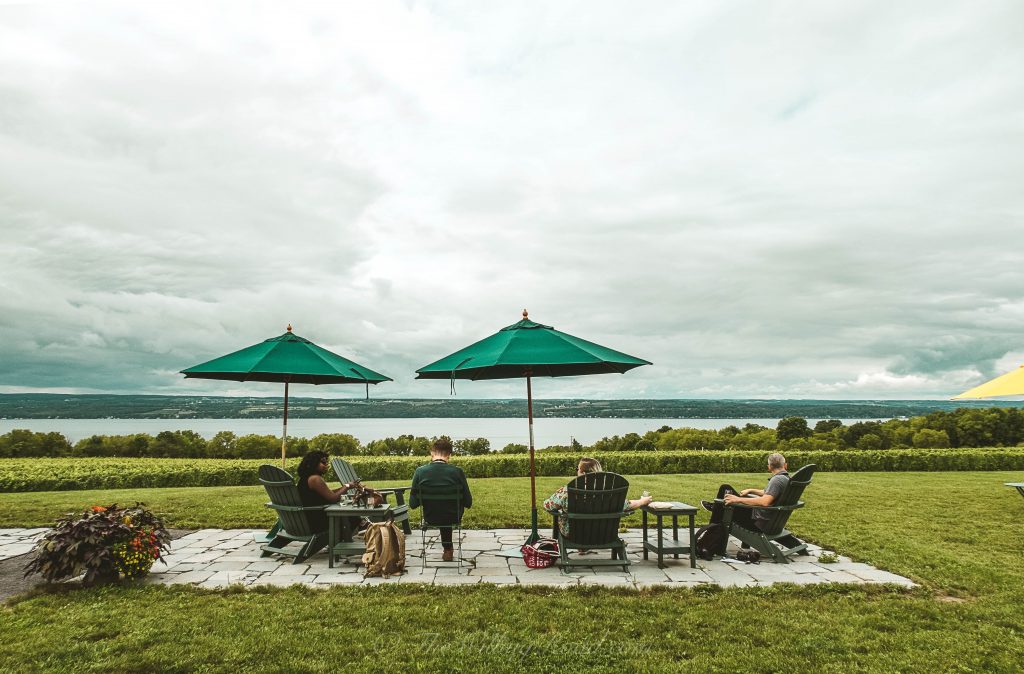 September was both uneventful and successful. A majority of the month nothing exciting really happened except maybe I realized that I still can’t take 9 shots of tequila and survive but that’s a whole other story that I don’t remember. When something exciting did happen, they were actually big moments for me. With the lack of eventful moments, I also had a lack of difficulties. It’s funny how success comes hand in hand with failure. Let’s take a look at the most exciting times and the downer times in the month of September!

Mac and Cheese at Mooney’s Sports Bar and Grill in Corning, New York

Sleeping with the dog. I didn’t do too many active things during this month, but during the final weeks of my couchsurfing time, I did sleep with my friend’s dog, who was quite the cuddle bug, but also very dirty.

Getting rained on in New York. It was pouring buckets when I went, which made some of the touring and driving around a bit miserable, but hey, a little rain never hurt anybody.

Wine tasting tour and grape picking. One of the tours I went on during my second TBEX (see below) was the Seneca Trail Wine Tour. One of the wine companies put us to work and had us pick grapes to test out their sweetness.

My Second TBEX– In August, I went to my first TBEX (Travel Bloggers Exchange) Conference in the Czech Republic. While I was still finishing my time in the Czech Republic I made a decision to attend the next TBEX in the United States, located in Finger Lakes, New York. Why not? I traveled to another country for it and it was so successful, what would happen if I decided to attend the one in my own home country?

Ok, even though beer is much cheaper in the Czech Republic than in the States, I ended up meeting many more bloggers/vloggers based in the US. Not only that, but I also met big name Instagrammers, bloggers, and public speakers like Oneika from Oneika the Traveller, Alyssa Ramos from My Life’s a Travel Movie, Michaela Guzy from Oh The People You Meet, Dave and Deb from The Planet D, and Ernest White II from Fly Brother.

Inner me was screaming with excitement that these wonderful people would even give me the time of day. Outer me was (trying) to stay calm, with my hands in my pants pockets in order to sweep back my blazer to make me look cooler than I actually am. (Also, I’d like to thank mother nature for the 5 minutes of rain that forced all of us inside, giving me the opportunity to laugh with the people listed above about the weather issues and thus officially meeting them).

Visiting the Mark Twain Study and Gravesite– One author that has influenced me to write and read as much as possible was Mark Twain. When I was at the TBEX in Finger Lakes, New York I had the opportunity to visit the study he wrote many of his works at, now relocated to the campus of Elmira College in Elmira, New York. Previously, the study had sat on a small farm where he would read his rough drafts to the family on the porch, and his gravesite, where I left a penny on top because that was all I had to give him. Story of my life. Although there was a lot of rain that day, I was overwhelmed with excitement to see the sights that had inspired Mark Twain. I guess you don’t have to travel too far from home to get inspiration.

Finding a place to live– If you remember, I decided to stick around San Diego for a few months to get my life together as far as my writing, video editing, and blogging. Unfortunately, I can’t couchsurf forever and my parent’s house isn’t in San Diego. I needed to be somewhere where I didn’t need to drive as much (since my car is nearing the end of its life), but still affordable. I was asking for a lot: Affordable, near the downtown area, preferably alone, if I had roommates they would need to be sane people (bad experiences in the past); doesn’t need to be big, but also can’t be the size of a closet; it’s fine if it’s in the rundown part of town, but then it shouldn’t cost as much as uptown; definitely not near the University; not in Pacific Beach (college kid party area); next to the beach would be nice, but I don’t want a heroin addict as a roommate; also don’t want bums; must be month to month, but also not do expensive credit checks… the list went on. It was like I was finding a million excuses not to get an apartment and stay in San Diego.

Until one fabulous day, while on break at work, I looked at my phone and the first thing that pops up is a post from a friend “Looking for someone to take over my lease.” It was as if the clouds in the heavens had spread apart, but only slightly because how could I possibly afford something like what my friend was offering? I needed to investigate the details further. I asked around about his roommates, about the apartment– “DO IT,” I was told. After so many failed searches, apartments I didn’t like, apartments that didn’t suit me and someone telling me “Don’t worry, when the right one comes along, it will be the right one” –and she couldn’t have been more right– I finally found my place.

My friend who was moving out of San Diego needed to find someone quickly to take his place and I needed to find somewhere to move as soon as possible. With one week left in the month he showed me around, gave me the details and with both of us sighing the relief that had been buried under mountains of stress, I signed the paperwork that day. Two friends were able to help out each other and it wouldn’t have happened if I hadn’t had been so picky about my living situation and waiting for the right one to come along. Now I just need to keep that in mind for my future ex-husband.

Coming to terms with not traveling and watching everyone else travel- Ah, so this is what it feels like. This is the first September since 2014 where I didn’t have plans to leave the country by the end of the month. Sometimes, (when I made my first rent payment, for example) I question why I made such a drastic decision after being on the road for so long. After all the wonderful people I met and all the life-changing experiences, why would I go back to (and stay in) the city that I left to feel more alive in the first place?

Simple– I love travel. I think everyone should do it alone at least once in their life. I’ve done it multiple times, but what I haven’t done is figure out how to travel or follow any of my passions when I have rent to pay, when I have electricity bills, and friends who want to day drink. It’s like I’ve returned to the “real” world, but I’m going to apply the same rules I used when traveling: Do what I want, when I want; go forth with determination; meet new people. There are plenty more rules, but that’s a whole other blog post.

In the meantime, I’ve met a lot of other travelers and I love watching my friends travel. It’s good to see people still doing it out there, even if it’s not surrounding me. Although, I’m lowkey jealous, I’ve got other goals right now (to be revealed on another day, otherwise you’ll see).

What's To Come in October

This first week I’ve been settling into my new place. It’s strange, but I’m treating it like any other time I decided to settle down in a country for an extended time (Brazil, Colombia, Cambodia).  It’s just that this time everyone speaks English and I’m paying the equivalent of three months travel budget per month on rent.

I’ll be catching up on the vlog and getting a lot more writing done as well, now that I have my own space. I’m hoping to get more exercise in now, too, since I have access to a gym, but who am I kidding? I’m lazy and I love pizza too much.

I do have some traveling happening, albeit short. I’ll be heading to Mexico City for Dia De Los Muertos, a bucket list item I’ve been dying to check off. I won’t be there for the parade (which only came about because of the James Bond movie, Spectre (2015)) but I will be there for the religious aspect of it, which I’ve never seen before and my family is Mexican. But 5 days in one spot can be a lot! So if you have any suggestions for Mexico City, comment below!

Can’t wait to take you all on the rest of my journey!