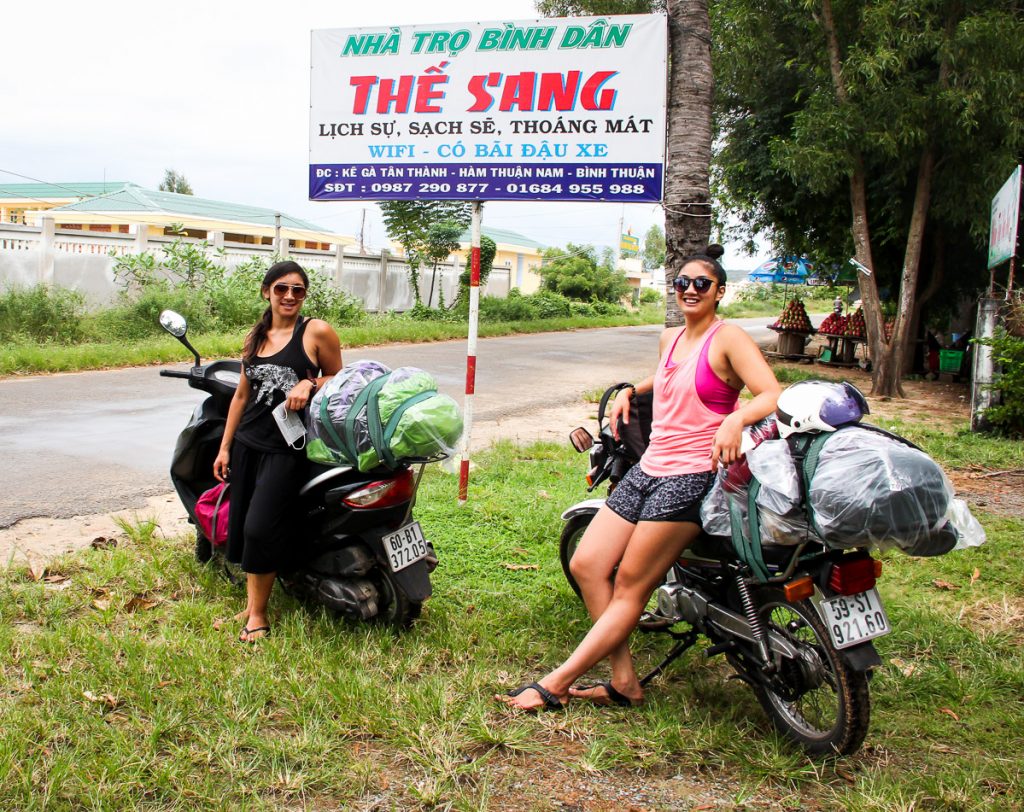 In case you missed it, I’m on the road. I wanted to see Vietnam and I wanted to create a story that I haven’t heard yet. When I met Dianna, I knew it was PIC-at-first-sight. She’s the one, guys. Together we are traveling up the coast and more of Vietnam– by motorbike, exhaust fumes and all. After practicing amongst the chaotic traffic of Ho Chi Minh, we were ready to hit the road out of the city, out of the traffic. We said peace out to everyone we met and now we are on the road. This is our first stretch of our trip:

Before leaving, a trusted friend and Vietnamese local, Huy, who had done the trip from South to North and back again multiple times had suggested we make a quick stop to see the sunrise before hitting Mui Ne: through Mui Ke Ga. The road to Mui Ke Ga, however, was a bit of a detour. Most people go straight to Dalat or Mui Ne but the beauty of driving yourself around is that you don’t have to be restricted to the popular destinations of buses and planes. It was our first stop on our month long trip.

We drove out of the city, where the roads were just as insane as the inner city of Ho Chi Minh but on a larger scale. The trucks were larger, the roads were larger, the exhaust fumes were more abundant… we were like ants next to the vehicles we were passing. The horns were blasting in our ears as we weaved around tractors, dump trucks, oil trucks, other motorbikes. There was no order. It was at least an hour before we could comfortably drive and feel the freedom of the road.

Riding motorbikes isn’t all sunshine and butterflies. We continually got lost, we encountered muddy roads, potholes, and rain. However, we were also constantly reminded why we decided to take such a tough form of transportation: we encountered green fields and palm trees, cow herders and cows on the highways, mountains surrounding us, children curious about our foreign faces and the sun reflecting off the storm clouds. 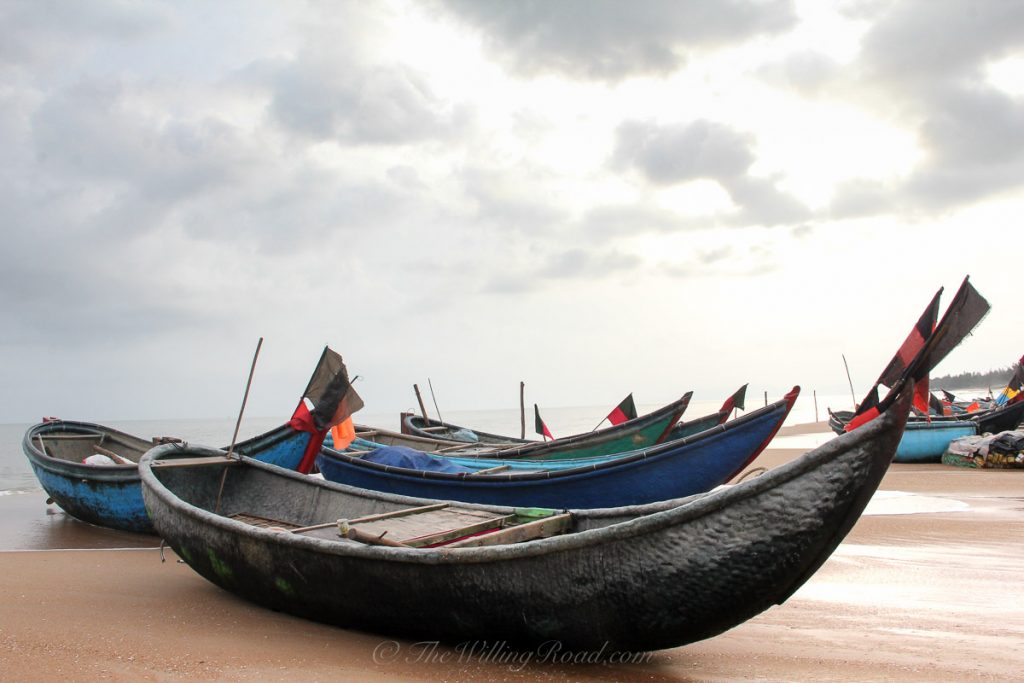 Canoes on the beach before Mui Ke Ga

Before hitting Mui Ke Ga, we stopped at a small beach where we saw fishermen resting after their long day and women playing cards and making fishing nets with their toes. The fishermen weren’t shy to have their picture taken. 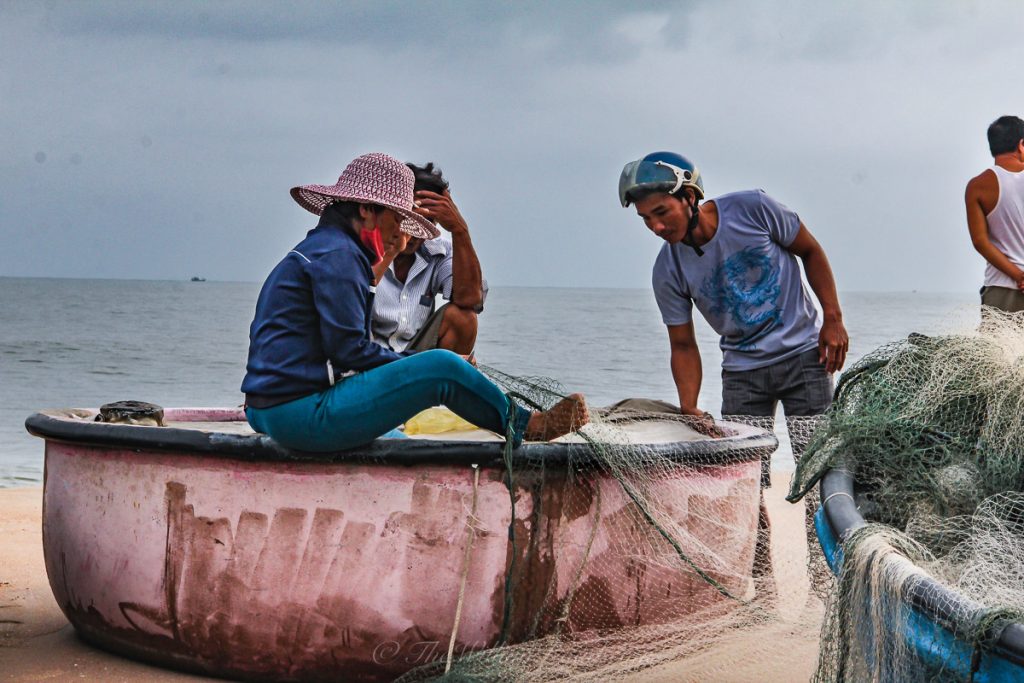 Making fishing nets on the beach

We even had a bit of a chat with an elder lady interested in our foreign faces. When I took a quick picture of her, she wanted to make sure it came out okay. She laughed and said “If only my mouth wasn’t so big.” I smiled and looked at her, “Đẹp.” Beautiful. 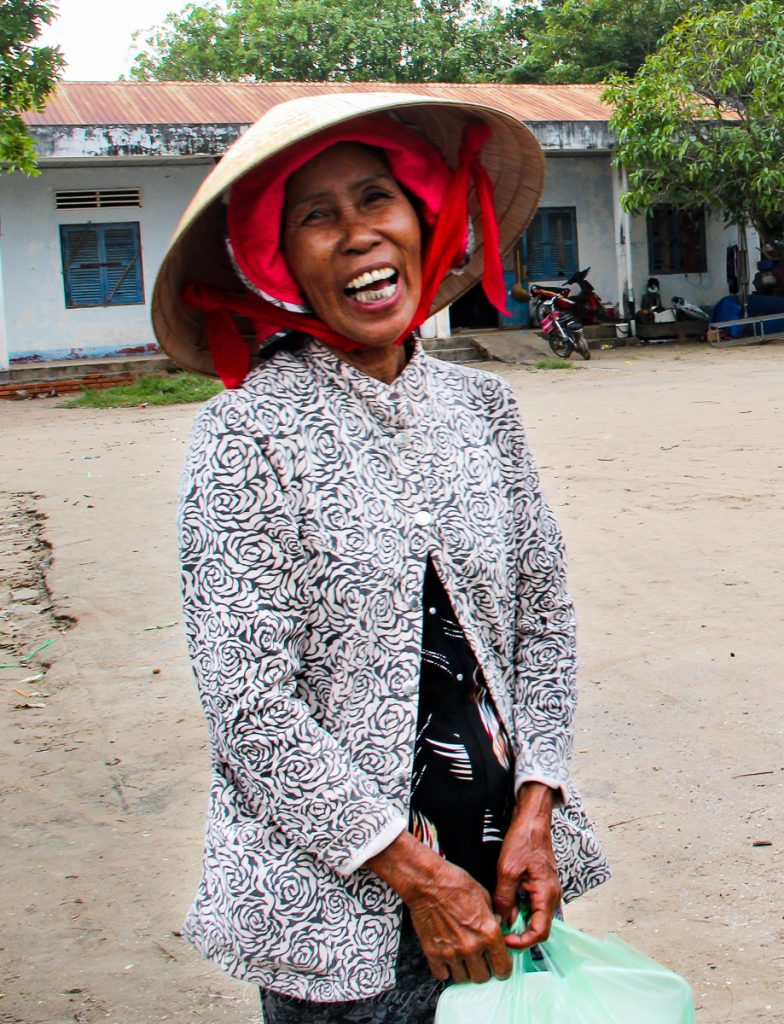 A beautiful local elder shy about her smile.

It was getting dark when we were running out of gas. Sorry, let me rephrase that… it was already dark. We hadn’t timed our travels right and there was hardly anyone on the road. We were in the back roads of butt fuck no where. We found a gas station and loaded up while checking the directions, but an old man started to come toward us. We were used to people coming up to us selling lottery tickets in Ho Chi Minh City where a simple Vietnamese gesture of “no” or ignorance usually sends them away. He was not selling lottery tickets. I felt him coming toward me so I stuffed my money away, and struggled to close my bag as the zipper was stuck. He was mumbling something to me in Vietnamese. Ignoring him, I closed the seat to my bike, forgetting to put my gas cap back on. I tried starting my bike. My key was locked. He continued to mumble. When my key came loose, my bike revved back to life and I carefully started to drive away but this upset the old man so he grabbed my water bottle out of the side pocket of my bag, grumbling some more. “Fuck it, just go, just go,” Dianna shouted. We sped off on our bikes back onto the muddy roads and puddles, my gas cap sitting at my feet.

When we finally made it to Mui Ke Ga, it was dark and there were no actual hostels. We asked around and everyone had suggestions of where to stay: their neighbors houses. We settled on a family that lived just outside the market where the bathroom pipes sprayed water all night and geckos hung out above our door, waiting for the perfect opportunity to sneak into our room (two of them were successful). 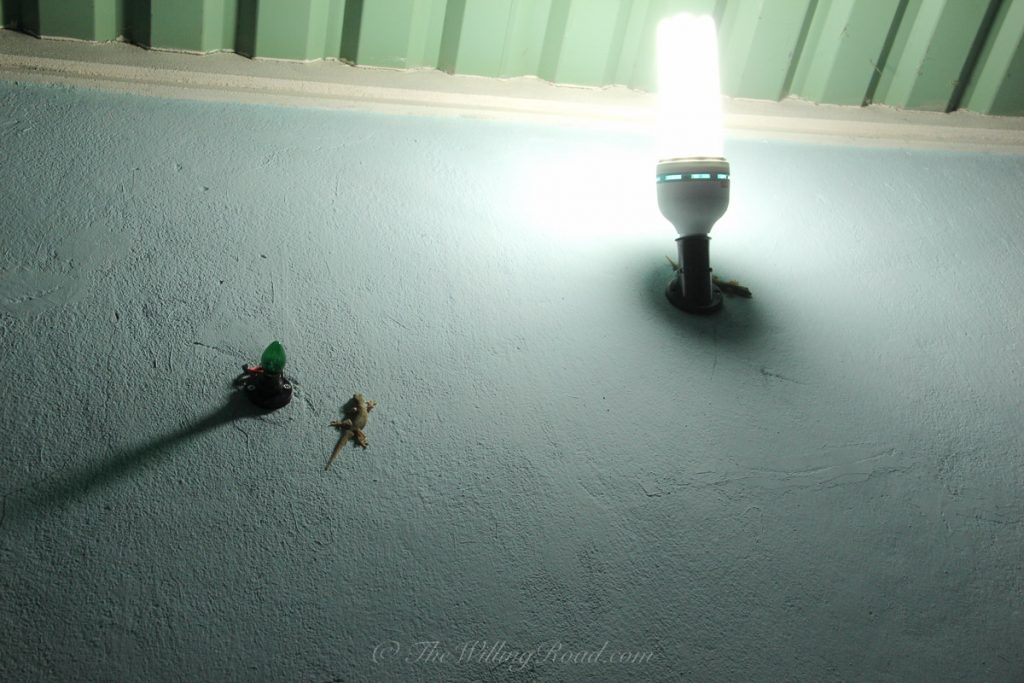 Our roommates for the night.

Before going to bed, we locked our door with a large padlock and one rusty key and followed our host to a locals house where they made us a quick dinner of eggs and rice. While waiting we chilled in some hammocks listening to the waves of the ocean that we could not see, recounting the hectic moments of our first day. Then we passed out for the sunrise the next morning. 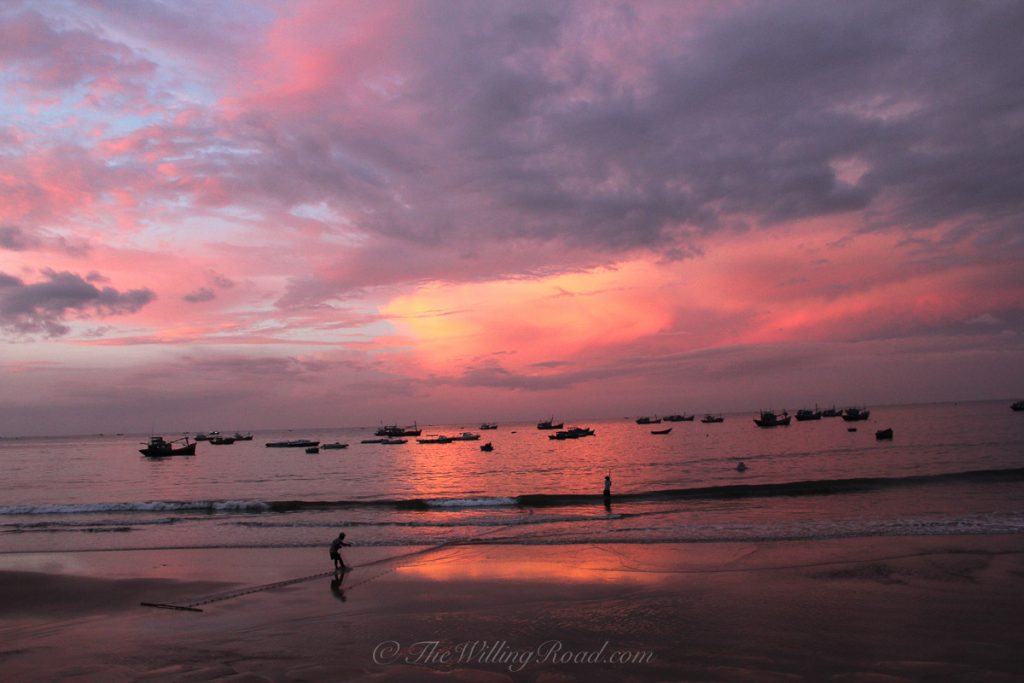 Yes this is a sunrise, yes it was completely worth it.

After watching the sunrise we packed up. Loaded up on Vietnamese coffee, sugar cane drinks and bananas we hopped on our bikes again, this time driving through romantic resorts. I took note of the resorts in case someone ever decides they want to put a ring on this finger. Until then, I’ll stick with the Nuvaring. Anyway, the road was much smoother than before and we were already starting to see signs of Mui Ne, sand dunes beginning to rise above us.

A quick stop, pretending like we don’t have to pee our pants

We drove along the coast, the ocean beside us a majority of the time. Long stretches of sand and water and people stopping on their motorbikes to take pictures. We didn’t stop as the joy of freedom and the wind in our face was more enjoyable.

Mui Ne was only 2 hours away. We spent the night there before our next long trip to Nha Trang, our next stop on our trip.

Or so we thought…