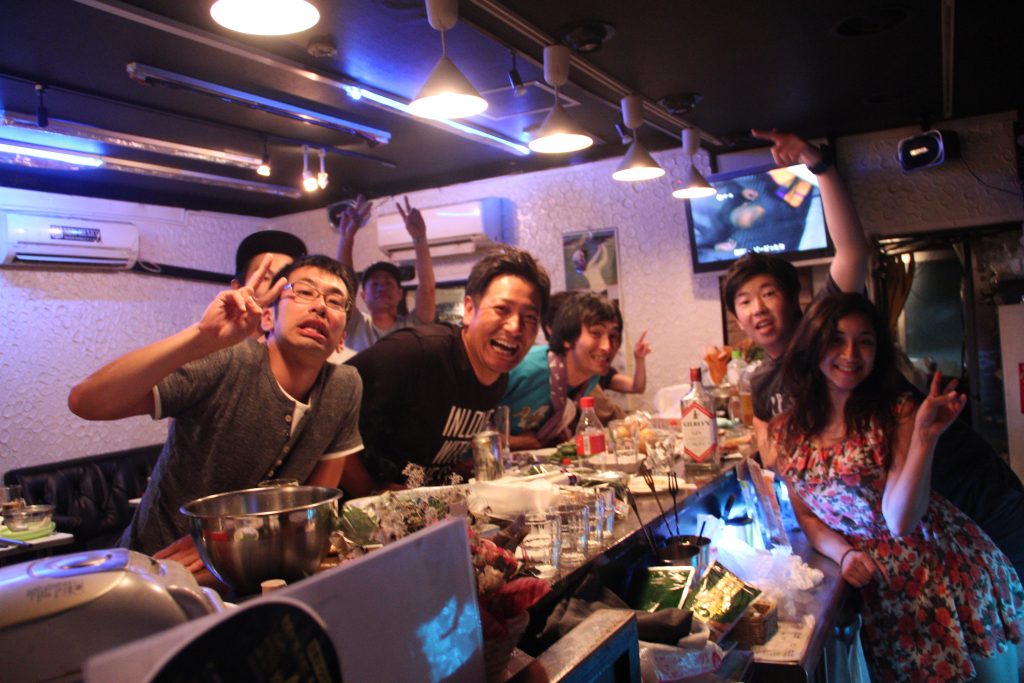 *The names have been changed

The bar was packed. Most izakayas are due to their small space and counters that fit about 6-8 people, but it was a private gathering of friends who frequented this bar, myself included, that had the room feeling stuffy, cigarette smoke swirling in the air– all friends of the bartender and owner, Sato-san*. It was common for the owner to seek help behind the bar from his friends when it began to get busy. One girl would take his place so that he could properly socialize, smoke cigarettes and drink a glass of beer, talk about golf. Men stuff. We called her Mama. Sometimes, the patron who had been drinking beer at the bar for 10 years would hop behind it and help out. On this day, Mama and the 10 year patron were unavailable and the owner was socializing with his friends in the crowded space. No one was behind the bar and I noticed that some glasses were getting low. Was it the alcohol, or was it that I was the only lady, or was it that the Japanese hospitality was finally taking an influence on me (or probably my ingrained need to constantly clean a bar)? I stood up grabbed the empty beer glasses, collected orders and went behind the bar to start filling glasses.

I had become the new Mama.

From then on, I began helping out. At typical Japanese bars people aren’t exactly ordering Long Island ice teas, cosmopolitans, and kamikaze shots. The Japanese like to last an entire night, sometimes until the sun rises, when the trains finally start up again, rather than black out before 1 am. So the beverages are simple, with alcohol seeming more like a garnish than the main attraction. “Namabiru” is the most often requested which in English is just the main beer on tap. Sometimes the ladies would order a cassis and soda, or grapefruit sour, or an oolong high. All combinations I had never heard of, but soon I started going behind the bar whenever I got a chance and Sato-san would assist me with identifying the bottles of alcohol which I had never seen or cared to try before. He taught me about stirring, when to do it and how many times. He taught me about the typical Japanese alcohol pour, and it’s not a lot. The first time I poured a girls drink, the original Mama was watching me and she was shocked how much alcohol I poured. To me, it wasn’t enough; to every Japanese person, it was way too much. Japanese people really like their foam in their beer so I began learning the appropriate amount of foam to include in a beer pour, as well.

Sake, or “nihonshu” is not drunk as often as Americans think Japanese people do. Nihonshu is  rice wine, so like wine or even a fine bottle of scotch it is something to be chosen carefully, enjoyed for the taste, and sipped slowly. Not taken in shots which I initially thought when I was handed my first glass of nihonshu. I was received with gasps of shock. Because I can’t quite read the kanji on a bottle of nihonshu, and I’m not well versed in the choosing of nihonshu I leave that up to the big guys.

Occasionally, foreign English speakers come through the bar. Unless they have been living in Japan for a while though, they tend to try and order things that aren’t common at a Japanese bar. If it were just Sato-san, he would have no idea what these people are asking for. I had someone order a lemon drop once and I did my best to create it. I found a shaker that I don’t think Sato-san even knew he had but there wasn’t really any lemons or martini glasses lying around so I did with what we had. She said it was great, but it looked lame in the makeshift martini glass.  Oh well. Then a girl ordered a shot of gin. With no shot glasses that I could see I gave her a shot in a rocks glass. I’m not sure if Sato-san was just being nice or if he didn’t understand the concept of a shot quite yet, but after I handed her the glass, he grabbed the gin bottle and filled it to just below the rim of the glass. The girl’s eyes widened, as did mine. “I think he thinks you’re going to sip it,” I told the girl. She didn’t mind anyway. She didn’t sip it, either.

By going behind the bar, we were mixing cultures. I don’t speak much Japanese, Sato-san doesn’t speak much English and neither do the rest of the patrons, but we all get along, making jokes and drinking alcohol. Suddenly, Japanese men were wanting to take shots (Sato-san has started collecting shot glasses now) because the American was behind the bar. And now, instead of drinking my normal straight whiskey, I was drinking the grapefruit sours so that I can practice making them for the girls and also so I could last all night.

Now, if my friend– the bartender, the owner– needs assistance behind the bar because there are too many orders to make or if he’s cooking dinner for everyone, I jump behind the bar to help out.